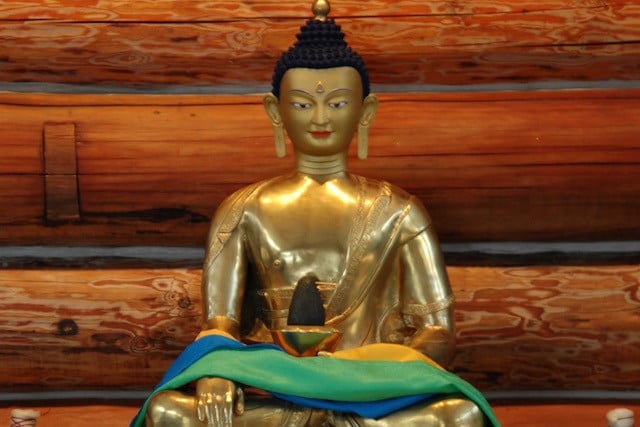 Fifteen Days of Buddha Miracles: The Day of Miracles Story

Friday, March 18, 2022, is the Day of Miracles (Chotrul Duchen), celebrated on the first full moon in the Tibetan lunar calendar. It commemorates the final day of miraculous display by the Buddha, which lasted 15 days. Go here to see practices you can do to celebrate.

Throughout the early scriptures we see that Buddha didn’t like to show his miraculous powers. However, a group of non-Buddhist, matted-hair ascetics challenged him again and again to do so. He refused repeatedly, until one day he saw the time was right to subdue their minds. Thus the competition of miraculous powers began. The Buddha’s powers were by far more magnificent than those of the non-Buddhists, and as a result all the non-Buddhist ascetics became the Buddha’s disciples.

The 15 days prior to the Day of Miracles are merit‐multiplying days in which any virtue created is magnified millions of times.

Here’s an abbreviated story of how it all unfolded. Thanks to Matthew Gola for sharing this rendition. Indented text is quoted from Buddha Weekly. Go there to read the full story in detail. 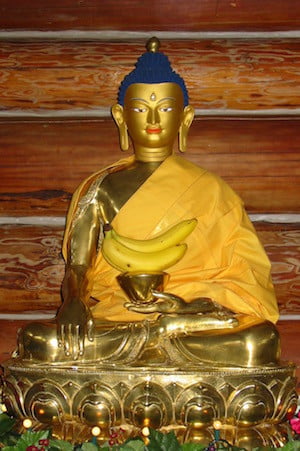 The Miraculous Deeds of Buddha Shakyamuni at Sravasti

Buddha was staying with hundreds of fully ordained monks in the Bamboo Grove outside of Rajagriha. King Bimbisara ruled that region, and he was one of Buddha’s greatest patrons. The King led many of his subjects to practice the Buddha’s teachings.

Six heretical teachers, leaders of the matted hair ascetics, were also staying at Rajagriha, and the King’s younger brother followed their teachings. Their misguided ways had clouded his mind. The King, wishing to help his brother, suggested he should listen to the Buddha. Although he saw no reason to, the younger respected the King. In deference, he decided to offer a great feast attended by his six teachers and their entourage, along with the Buddha and an assembly of monastics.

The six ascetic teachers came and sat in the highest seats. The Buddha and his disciples also attended. When they arrived, they walked toward the few remaining seats, but before they could reach them, the six teachers found themselves getting up from the highest seats and taking the lower. They tried three times to take the higher seats, but each time found themselves in the lower. Finally, feeling ashamed, they remained there.

Before the food was served, water was brought to the guests so that they could wash their hands. As Buddha was in the highest seat, his host offered the water to him first, but he said, “Offer it first to your teachers.”

The water was then offered to them, but when the vessel was tipped, nothing flowed into their hands. The host tried again and again, but still the water would not flow. He then offered it again to Buddha. The water flowed freely to Buddha, and after that to everyone.

Before they ate, the host asked Buddha to bless the food. He deferred again to the six teachers, saying, “Request the blessing from your own teachers.” But when the six teachers tried to pray, they were unable to utter a word and gestured that Buddha should say the blessing. Buddha did so with a clear, beautiful voice.

The food was offered first to Buddha, but he said once more, “Offer it first to your teachers.” The food was then offered to them, but everything they tried to take flew into the air. After the Buddha took food, everything came down into their hands.

After the meal, the host made the customary request to Buddha for teaching. Buddha again deferred to the six, saying, “Have your teachers speak of their doctrines.” Again the six teachers, unable to speak a word, could only motion for Buddha to speak.

Buddha spoke in a beautiful voice and each listener heard what fitted his own needs, deepening their understanding, bringing realizations and winning followers.

The six teachers were humiliated and angry, and went away to recruit demons to help them out. The demons then manifested as the six teachers, going to the marketplace to show miraculous feats and preach against the Buddha. The people were impressed.

In the public square, before their rapt audience, the demons challenged the Buddha to a competition of miraculous powers. They boasted that they would outdo everything the Buddha did two to one. “People shall see for themselves who is more powerful,” they proclaimed.

The six teachers went to King Bimbisara and asked him to deliver their challenge to Buddha. The King laughed at their arrogance. “You are foolish. Your miraculous deeds cannot begin to compare to those of Buddha’s. Your challenge is like the light of a firefly compared with sunlight, like the water in an ox’s hoof print compared with the ocean. It is like the fox challenging the lion.”

The six pundits persisted and said, “You will see. What happened before is no indication of what will happen now. When we compete, it will be clear who is the greater.”

King Bimbisara visited Buddha and told him of the challenge.  Buddha replied, “The time will be known. Prepare a suitable place.” 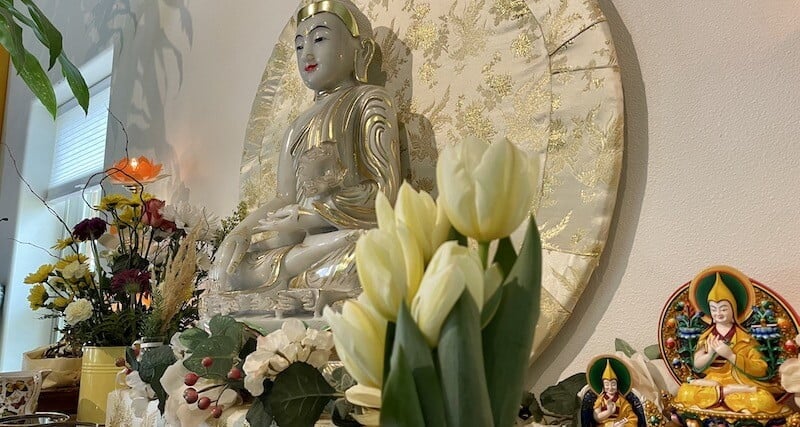 King Bimbisara had his ministers clean and prepare a broad field. There they erected a lion throne and victory banners of the conqueror Buddha. People eagerly awaited the sight of Buddha and the six teachers performing their miracles. However, to everyone’s surprise, Buddha left Rajagriha and went to the neighboring city of Vaisali.

The six teachers, of course, claimed that the Buddha was afraid to face them. They went to Vaisali to challenge him again, but then he moved on to Kausambi. The Buddha moved from town to town, with the six teachers following him. In each place the matted-haired ascetics petitioned the local ruler to deliver their challenge to the Buddha.

Finally, the Buddha went to Sravasti, the land of King Prasenajit. The kings of the all countries he had passed through came with him, along with thousands of their attendants, as well as the six teachers with their ninety thousand followers.

Again the six teachers petitioned, this time to King Prasenajit, challenging the Buddha to a competitive display of miraculous powers.

This time the Buddha replied, “The time is known. Prepare a suitable place.”

King Prasenajit had his ministers clean and prepare a wide field by burning incense and setting up lion throne and the banners of the Conqueror.

And so the demonstration began. The miracles were exceptional.

On the first day, after the meal offering, the Buddha placed his toothpick on the ground. It immediately sprang up us an extraordinary tree—miles wide—filled with flowers, fruits, jewels and lights. The Buddha then gave a teaching to the masses, and many attained realizations on the spot.

On the second day, the Buddha turned his head to the left right and left, prompting two jeweled mountains to arise on either side—laden with pure, sweet waters and lush foods for humans and animals. The Buddha again spoke, his voice reaching every being, invoking understanding and realizations in the minds of all who heard.

On the third day, after eating, Buddha rinsed his mouth with water. On the ground where the water fell, a great lake formed. It extended for hundreds of miles. Filled with the purest water, jewels, and sweet-smelling lotuses, it also emitted a marvelous light. People were very happy, the Buddha taught again, bringing equally marvelous benefits to the minds of the follower

On the fourth day, after the lunch offering, the Buddha created a pool from which eight streams flowed outward in circular paths. In the sound of the streams people heard the teachings that led them to higher rebirths and increased their virtuous efforts.

On the fifth day, Buddha showed a brilliant golden light that purified everyone present of all afflictions, making them very peaceful in body and mind. Again, he gave teachings and transformed their minds.

As the days progressed, kings and gods came to make offerings, which the Buddha accepted. Then, before the crowds of thousands of people, Buddha made marvelous displays and taught as before. Some people realized a wish to do virtuous deeds and planted seeds for higher rebirth. Others became arhats, and some realized bodhicitta.

On the eight day, after seeing the miracles and hearing the teachings, the 90,000 followers of the matted-haired ascetic teachers asked to join the sangha. Their matted hair and beards fell off, and they became Buddha’s disciples.

The display continued. Day after day, the Buddha gave luminous teachings that transformed the minds of all listeners. 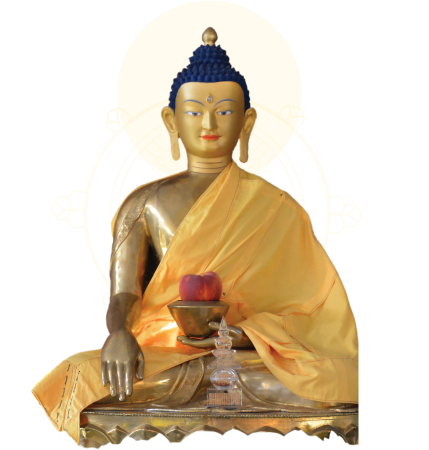 On the fifteenth and final day of the spring celebration, King Bimbisara brought gifts to Buddha. Buddha then told King Bimbisara to bring vessels for food and the vessels were miraculously filled with foods of a hundred different tastes. When the assembly ate them, their bodies and minds were completely satisfied.

Buddha asked them, “Why is there such immeasurable misery in the world?” By his blessing, even the eighteen kinds of demons realized that their misery was caused by deeds they had done themselves. They felt great faith in Buddha.

We can see from this story the Buddha’s extraordinary skillful means. Although reluctant to show his powers, when the time was right, his powerful display illuminated the minds of many thousands of beings at that time and continues to inspire disciples to this day.

Let’s rejoice in having met Buddha’s teachings in this time and place, over 2500 years later, and take advantage of our amazing opportunity to transform our own minds!

Go here to see practices to do on the Day of Miracles—celebrated this year on March 18.