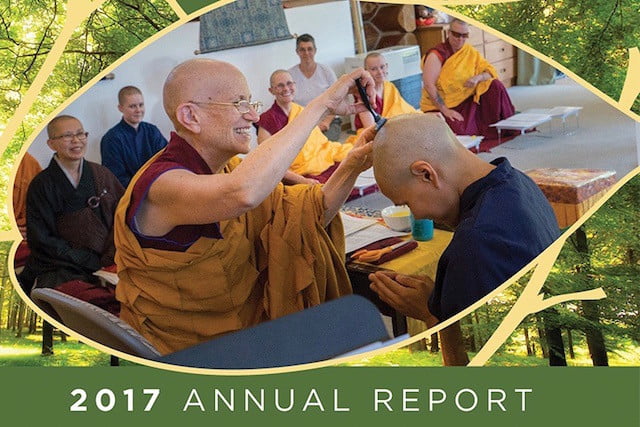 “Natural growth flows out from nurturing the Abbey’s mission: to support a flourishing monastic community where learning and practicing Buddha’s teachings cultivate peace in the hearts of the residents, visitors, and the world.”

Like trees in a well-tended forest, Sravasti Abbey grew in many ways in 2017 — grew in size and grew in the Dharma. This is a natural process as Abbey monastics mature in their practice. We thank each of you for your support and rejoice in the interconnected web of people around the world who share and treasure the Abbey’s values: non-harming, helping others, and thoroughly subduing our afflicted minds.

As the Abbey grows, we are also sending deep roots into American soil, roots that will help to hold the Buddha’s Dharma more firmly and clearly far into the future.

The year began and ended with an emphasis on monastic life as we studied the Vinaya. Vinaya is often defined as the monastic ethical code, but we are learning how it is so much more than a set of precepts. The Buddha’s compassion shines through the meticulous instructions he gave for how monastics can live together harmoniously to support our spiritual development and serve society.

Of course, as the monastic community deepens our lived experience of the Dharma, we have more to share with others, and the Abbey shared Dharma aplenty in 2017. In addition to many courses at the Abbey, monastics also traveled to teach the Dharma, including visits within the U.S. and to Italy, Russia, Mexico, Germany, Taiwan, Malaysia, and Singapore. 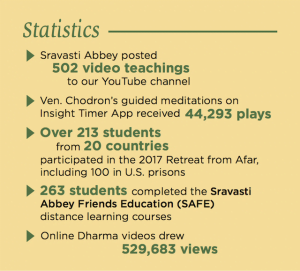 Creating peace in the hearts of residents, visitors, and the world

The Abbey’s natural growth in 2017 ripened in multiple publications: Approaching the Buddhist Path, the first volume in a series entitled The Library of Wisdom and Compassion that I co-authored with His Holiness the Dalai Lama; Practical Ethics & Profound Emptiness: A Commentary on Nagarjuna’s Precious Garland, teachings by one of my spiritual mentors, Khensur Jampa Tegchog; and a collection of six booklets on the Vinaya.

Outreach continued to be an important Abbey activity through our prison Dharma program, interfaith activities, and support for local homeless and at-risk youth. We also spread the Dharma online by posting hundreds of video and audio teachings. Most of the community was involved with our ongoing work in the Abbey forest and grounds.

In the background of all other activities, the community built Prajna Cottage, a small residence for the abbess. I thank every one of you for that!

Everything the Abbey does is enhanced and supported by volunteers, supporters, and well wishers around the world. We rejoice that people near and far join us in creating peace in a chaotic world. Through our efforts, may kindness naturally grow in our own hearts and in the world.

Thank you for all you do to support the Abbey’s efforts to benefit others.