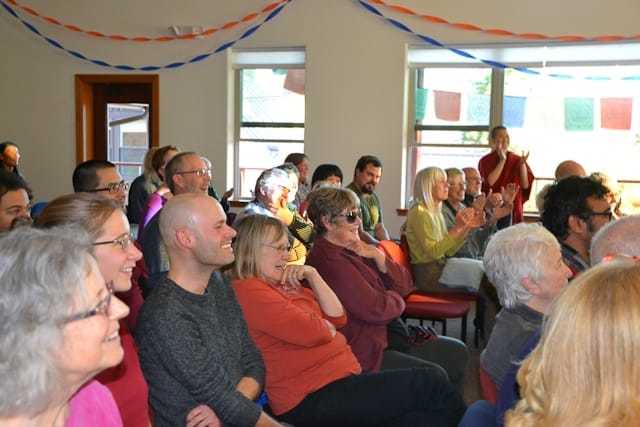 The Sravasti Abbey community—Abbey residents, guests and lay followers from near and far—gathered to celebrate this auspicious occasion on October 28. The day began with an invigorating Tara Puja, a monthly ritual practice at Sravasti Abbey, which invokes the swift enlightening influence of Green Tara.

On this occasion, about 75 attendees focused on generating bodhicitta, making offerings to all the Buddhas and bodhisattvas, and petitioning Tara with the specific dedication for the long life and good health of their teacher.

The ceremony was sealed with a flower offering of a different kind. In honor of her dedication to teaching the Dharma, students presented Venerable Chodron a paper rose containing a 40-day practice commitment of their choice—a day for each year of her ordained life. A basket full of paper roses was also presented, containing the commitments of many students who could not attend in person.

The afternoon was set aside for praise and play. Teachers, peers and students from across the world had written in to express their gratitude for Venerable Chodron’s contribution to spreading the Dharma.

What quickly became obvious was the far-reaching impact of a single being intent on benefitting others. A long-time Singaporean student wrote in expressing gratitude for her spiritual ‘mother’, who never failed to check in with each family members’ practice, guided them through difficult patches, and even named one of her sons.

A Zen Buddhist priest demonstrated how from small virtuous actions, big things can grow. A single visit to the local prison—encouraged and supported in person by Venerable Chodron—flourished into the seminal occasion of a female Buddhist chaplaincy position in Missouri State Prisons, Buddhist groups in 21 of these Missouri prisons, and a bakery that only hires ex-offenders, helping them to find their feet upon returning to society.

Local students also offered poems, songs and skits to demonstrate their appreciation. One student, inspired by Venerable Chodron’s example of living in monastic precepts, put to music ‘The Joy of Prātimokṣa Discipline’ – a poem by His Holiness the Dalai Lama, featured in his book co-authored with Venerable Chodron, Buddhism One Teacher Many Traditions, parts of which are excerpted below:

our supreme teacher, the Impeccable One:

it is becoming for us to engage with pure faith

beneficial and joyful, both here and beyond,

medicine for both self and others,

marvelous! We have met the Buddha’s Way!

Though difficult, we have encountered it this once;

those who seize it are even fewer.

With firm determination in our hearts,

Beyond doubt, this discipline subdues

even the duḥkha natural to householders’ lives—

what need to mention that this discipline eases that, too?

In short, the day was a wonderful celebration of the bountiful fruit that can arise from a life dedicated to the Dharma. May we follow Venerable Chodron’s example and take full advantage of our present opportunity to study and practice the Buddha’s teachings, so we may attain awakening and be of best benefit to all beings.

Below is an article on a Nov. 28 speech by Ven. Chodron on her decision to ordain, delivered during her 2017 teaching tour of Asia.

One of the pioneering Western Buddhist nuns, Thubten Chodron, shares the Dharma with the Buddhist Studies Department at Fo Guang University, Taipei, Taiwan

(Fo Guang University Reporting) Venerable Thubten Chodron is amongst the first generation of Western women who ordained in the Tibetan tradition. At the invitation of the Buddhist Studies department, she gave a talk on November 28 at the Buddhist Studies department in Yilan, sharing how her Buddhist education and efforts to spread the Dharma have straddled Tibetan, Chinese, and American cultures.

“Why did I decide to ordain?” Venerable spoke about how in the past she sought out different religions, hoping to find answers to her questions about life. As she has the character of an independent thinker, this led her to reject religion for a period of time. “However, I always believed that the greatest value in life must have something to do with ‘benefitting others’.” Later, by chance, she participated in a meditation class taught by Tibetan Lamas, and was astonished to hear them say, “You can completely disbelieve whatever I say, but you have to think about and practice what I have said, and see whether it benefits you or not.” From then on, she became interested in Buddhism.

In 1975, Venerable went to Nepal and India to study Tibetan Buddhism, and was ordained by Ling Rinpoche. In 1986, she went to Taiwan to take the bhikshuni ordination, and became connected to Fo Guang Shan through participating in a conference. The poor conditions that she studied in at the time in Dharamsala, India, made her even more appreciative of the opportunity to learn the Dharma, and the relationship between teachers and students was as close as that between parents and children.

In the process of learning, Venerable sought out female role models, but due to the lower status of women in the Tibetan sangha, they did not have the opportunity to develop their talents, and female role models were difficult to find. Aside from this, she often struggled with her afflictions when she perceived that she was not practicing well. Through repeatedly learning how to accept herself, to laugh at her weaknesses, and reflecting upon how afflictions and faults can be reduced over time, she was gradually able to release them.

When asked what school of Tibetan Buddhism she belongs to, Venerable replied directly that although she began learning the Dharma in the Gelugpa school of Tibetan Buddhism, she also received the precepts in the Dharmaguptaka Vinaya lineage practiced in the Chinese tradition, and thus feels a close connection with Chinese Buddhism. Furthermore, she believes in non-sectarian Mahayana Buddhism, “Therefore I only wish to say, I am a Buddhist.” Venerable encouraged students that as the Mahayana bodhisattva path is very long, they should study a broad range of Buddhist teachings in order to benefit all kinds of sentient beings. Even though there are misunderstandings between different Buddhist traditions, but in this age that is said to transcend national boundaries, there is greater opportunity to overcome these misunderstandings and conflicts between traditions.

In order to provide a conducive environment for Americans to learn and study Buddhism, Venerable established Sravasti Abbey in Washington State in America. The Abbey only accepts offerings from the kindness of others to sustain their entire economy. Although their location is rural, they have never gone hungry due to lack of donations. After a reporter visited and spread the word about the Abbey, then more people came to the Abbey to learn the Buddhadharma.

Finally, Venerable chanted the English version of the Three Refuges, and joyfully invited everyone, “We welcome everyone to visit Sravasti Abbey when you have the opportunity!”