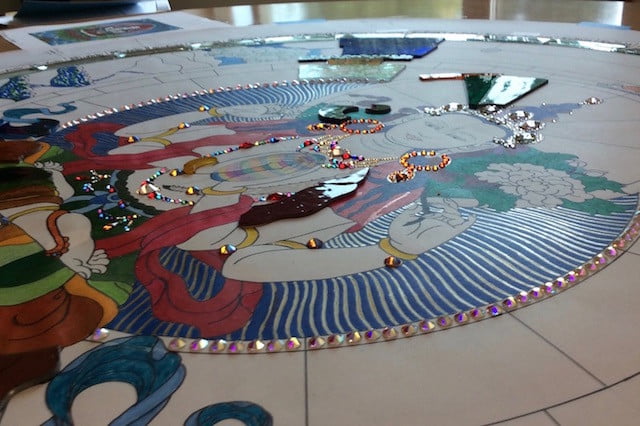 For glass artist Beverly Brecht, the creative process is like a meditation. She has offered beautiful additions to Sravasti Abbey: a stained glass window of the first Buddhist nun, Mahaprajapati Gotami that was installed in the nuns’ residence in 2009 and another window of 1000-Armed Chenrezig installed in the Chenrezig Hall dining room in 2015.

Bev is now working on a new window — Four-Armed Chenrezig — for the Kwan Yin Room in Chenrezig Hall. While Bev was here last fall to consult on the new project, she spoke with Venerables Chodron and Pema about her creative process.  Here is their conversation.

1. What inspires you to start the creative process? What sustains you through the process?

For the first window, the Gotami window, each day, before I would start working, I would meditate on White Tara. Then I would listen to Dharma talks from the Abbey and His Holiness (the Dalai Lama), or I would play Tibetan music while I worked. When I get inspired, it doesn’t seem to matter how long it takes. Whether it’s nine months or three years, it doesn’t matter really. The process just takes as long as it takes.

The creation process is like meditation for me. It’s even better than meditation. It’s almost like an out of body experience. I get into a state of mind where I don’t really know what time it is or I’m not that aware of my body. I’m just working and so focused on everything that I’m doing—cutting a piece of glass or figuring out how the work is going. It’s hard to explain. It’s like the very best meditation that I ever have.

The other stained glass projects that I have done and still do are enjoyable, but it’s work. Compared to the Abbey windows, it’s like the difference between washing dishes and sitting and having a great meditation. One is just work and the other is almost like bliss, really.

When I’m working on these windows, an inspired state of mind is really important because that’s what gives that window its spiritual power. I believe if I’m not focused, if I don’t have the right mental attitude, then the window won’t be as powerful. Someone will know.

If I can’t get in that state of mind, then I don’t work that day. I just go do something else. If it doesn’t feel right I don’t do it, because it’s so important to me to be in the right state of mind.

3. Can you give an idea of the time and effort that goes into it? How many hours does it take? How hard is it to get it right? How careful or detailed do you need to be?

I don’t know. I don’t know because right now for the third window, for the Four-Armed Chenrezig, I think about it on and off when I’m doing other things. I think about what I might do or what I could do when I get to my studio to work on it. It’s not possible for me to calculate how much time I spend because it’s in my mind all the time. The most difficult part is getting the design right in the first place. Once I start cutting glass, that’s the easy part.

Regarding getting it right, I think it’s either right or it’s not. There’s no middle option. Either a line is perfect and a piece of glass is cut perfectly or it’s not. If it’s not perfect then I don’t use it. If I were to use a piece of glass that wasn’t perfect, and I said, “Well, it will be ok. It’s just ok, good enough,” then maybe the next piece of glass won’t fit right either. So the mistake will just keep getting bigger. That’s why each piece has to be perfect to begin with because the mistake will just grow and get bigger.

That’s on any window, any project that I work on. I learned many years ago, every piece has to be right. With stained glass especially, you just can’t have any piece that doesn’t fit right because the window won’t be the right size. But with these windows for the Abbey, you can’t make any mistake because then the window won’t fit into the space where it’s supposed to go.

4. What’s the biggest challenge of doing something like this?

The biggest challenge was getting the drawing right in the first place. When I was at the Abbey with my patterns, with my drawings, I wanted everyone to help me get this correct because that’s the hard part. I’m not a trained Tibetan artist. A thangka painter would know exactly the right proportion and how everything should be in a thangka painting, but I’ve not had that training, so that’s where I needed everyone’s help, just getting the drawing right. That’s the hard part for me.

Bev hopes to install the new window in 2018. Watch the Abbey photo pages and enews for updates.