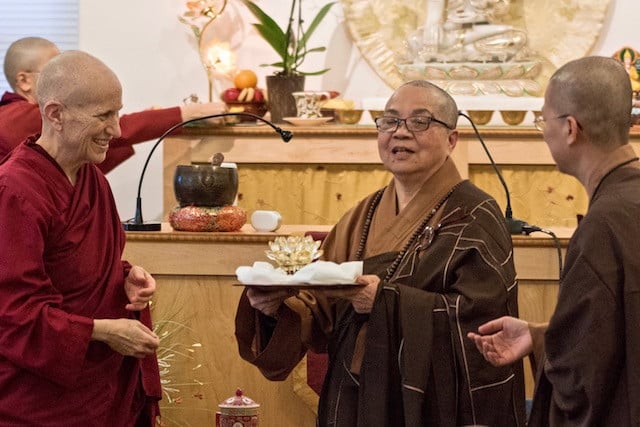 The entire Living Vinaya in the West program taught by Venerable Bhikshuni Master Wuyin and her disciples was a blessing for Sravasti Abbey, but one event at the beginning and one at the end were special.

During the initial convocation, Ven. Master Wuyin offered gifts to the Abbey. Among them were two crystal lotus lamps for the altar. One of Ven Wuyin’s disciples commented, “It was so meaningful to see the abbess of Luminary Temple light the lamp of the abbess of Sravasti Abbey.”

At the end of the last session, Ven. Master Wuyin read the verse she had composed for Sravasti Abbey.

The establishment of Sravasti Abbey embodies the paragon

As long as the Vinaya is upheld, the brilliant lamp of wisdom will be sustained.

She then unpacked the meaning.

“I came here to Sravasti Abbey because I witnessed a platform [for the existence and spread of the Buddhadharma] here and I wanted to see it for myself.

“The first bhikshuni in our world was Mahaprajapati Gautami, the Buddha’s aunt and step-mother. Through her life, she showed that women can enhance themselves and can attain awakening.

“Sravasti has long history in Indian Buddhism. During the Buddha’s time, the kingdom was an economic and cultural center, a place where the people were open-minded and talented. [The Buddha spent twenty-five summer retreats there, and both a nuns’ community and a monks’ community were located at Sravasti.]

“The Buddha was like a lion. Only with his wisdom, he was able to teach those contemporary wise men or scholars. He did not have to declare to a fly, ‘I’m a lion, you have to listen to me.’ Even if he did, flies would ignore who he was. The Buddha was able to evaluate different philosophical views and could invite other people to investigate the truth. The establishment of the Abbey is the beginning of your challenges; you’ll also be challenged by different people with different beliefs.

“The brilliant lamp of wisdom is the Buddha’s wisdom. It must be passed on to future generations, for it is the key to freedom from duhkha. How do we do this? It begins with upholding ethical conduct, in particular the monastic ethical code, the Vinaya. We start by studying it—in our case this is the Dharmaguptaka Vinaya, which has a living tradition of bhikshuni ordination. On the basis of Vinaya, we must cultivate other qualities, such as concentration and bodhicitta. When we do this, we can generate profound wisdom and fulfill all realizations of the path.

“Sustaining the brilliant lamp of wisdom requires faith, confidence, and commitment on our part. We must cultivate these qualities in order to spread the Dharma to all those who are interested and to preserve the Dharma for future generations. There are many fellow practitioners around us, and if we unite together, anything is possible.”

Read more Celebrations and Recognitions from the Abbey’s guest teachers.