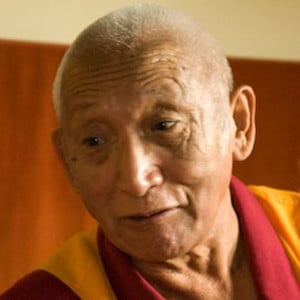 Venerable Thubten Chodron received many teachings from Geshe Sonam Rinchen. She went to him for advice throughout her ordained life and always found his counsel to be wise and supportive.

Geshe Sonam Rinchen was born in 1933 at Dhargyey, in the Trehor Kham region of Eastern Tibet. At the age of thirteen, he decided to become a monk and entered Dhargyey Monastery, where he excelled in his studies and in debate. When he was nineteen, he made the two and a half month journey on foot to Central Tibet in order to enter Sera Je College of Sera Monastery. He became a fully ordained monk and remained there for the next six years until his studies were interrupted by the Chinese invasion of Tibet in 1959, which forced him into exile in India.

For the following nine years, he lived with many other monks under extremely harsh conditions in Buxa Duar, West Bengal, in what had previously been a British internment camp. In 1967, he entered what is now the Central University of Tibetan Studies in Sarnath and stayed there until 1976, obtaining the degrees of Shastri and Acharya with honors. In 1980, he took the public examinations for the monastic title of Geshe. He received the highest qualification, that of Geshe Lharampa.

Geshe Sonam Rinchen taught at the Library of Tibetan Works & Archives in Dharmsala, India for over 30 years. He published ten books in collaboration with his translator Ruth Sonam including Aryadeva’s Four Hundred Stanzas on the Middle Way, The Heart Sutra, The Bodhisattva Vow, the Six Perfections, How Karma Works, and Atisha’s Lamp for the Path to Enlightenment.

Venerable Geshe Sonam Rinchen passed away in Dharamsala on 5th September 2013. He was cremated on the grounds of the Library of Tibetan Works & Archives.