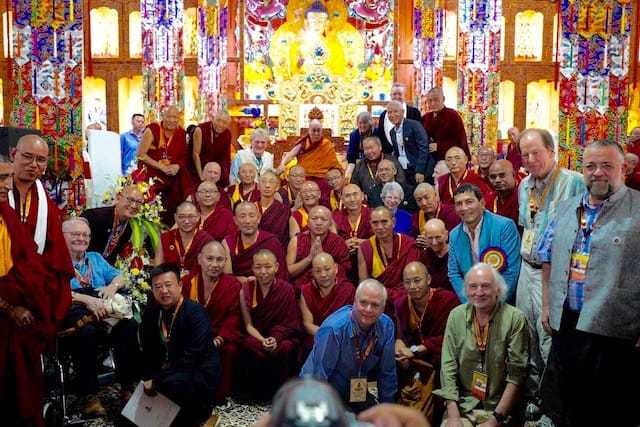 Ven. Chodron was invited to speak at an international conference on Je Tsongkhapa alongside other distinguished Western and Tibetan scholars at Ganden Monastery in South India December 18 to 23, 2019. The conference was part of the commemoration of the 600th Anniversary of Je Tsongkhapa’s parinirvana. Ven. Damcho followed as her assistant and shares about their time in India. See photos here.

“2019 represents the 600th anniversary of the nirvana of Je Tsongkhapa, the founder of Ganden Monastery. To commemorate this important landmark, Ganden Monastery is hosting a 3-day international celebration of the life, thought, and teachings of Tsongkhapa, one of the greatest masters of Tibetan Buddhism.” His Holiness the Dalai Lama, they said,  “will personally grace this international celebration.”

Citing her “special contribution to the study, translation, and dissemination of Tsongkhapa’s writings and thoughts in English,” the letter invited Ven. Chodron to attend..

Further, chief conference organizer Dr. Thupten Jinpa—principle translator for His Holiness the Dalai Lama and president of the Institute of Tibetan Classics—asked Ven. Chodron to submit a paper and give a short presentation on Je Tsongkhapa’s contributions to the understanding of bodhicitta.

After recovering from the shock of receiving such an invitation, Ven. Chodron could only say, “Yes!”

Ramesh, a friend and student in the Sravasti Abbey Friends Education program (SAFE), kindly met us at the airport and offered lunch. We caught a small plane to Hubli, and then rode on bumpy roads to finally arrive in the Tibetan settlement outside Mundgod that evening.

This Tibetan settlement is home to Ganden and Drepung monasteries, two of the three great Gelug monasteries. (Sera near Bylakuppe is the third). Jangchub Choeling nunnery is also in the settlement, as well as Nyingma, Kagyu, and Sakya monasteries. 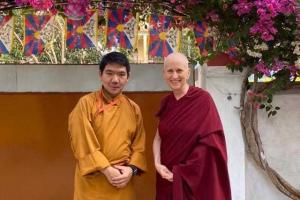 Ven. Chodron stayed at Serkong Rinpoche’s house, and I stayed at Dokhang Khangsten with some of the conference speakers just a five-minute walkaway.

The present Serkong Rinpoche is 35 years old; his previous life was one of Ven. Chodron’s root teachers. She has visited Rinpoche and the monks at his labrang in Dharamsala and Mundgod many times before and they are like family to her.

The next day, after settling in, we tried to attend a session of an Aryadeva symposium but, sadly, there was only an English translation during the morning session when His Holiness presided. (His Holiness’ opening remarks on the Aryadeva session, which we missed, are here.) We went in search of Jeffrey Hopkins but could not find him; instead we ran into Ven. Chodron’s old Dharma friends from Thubten Dargye Ling in California and had a nice time discussing Dharma and catching up.

December 18 was a very full day. It began with Ven. Chodron’s brief but wonderful opportunity to present Samsara, Nirvana, and Buddha Nature and Following in the Buddha’s Footsteps—volumes 3 and 4 of the Library of Wisdom and Compassion—to His Holiness the Dalai Lama. They are co-authoring the series together. His Holiness thanked her and insisted we take a photo with him.

Later that morning, we attended a welcoming ceremony for His Holiness when he moved from Drepung to Ganden Shartse, and that afternoon we went to pay respects to Ling Rinpoche, whose previous life was Ven. Chodron’s preceptor. There were more meetings in the afternoon.

In the evening we headed to a public talk by a geshema—a nun who has a geshe degree—at Jangchub Choeling Nunnery. The two Jangchub Choeling nuns who have been studying science at Emory University in Atlanta were the main organizers of a series of three talks by geshemas from the nunnery. Ven. Choyang, who visited the Abbey in 2018, was the emcee, and the other nun translated from Tibetan into English.

The talk was very well attended by Western guests and monastics, and we really rejoiced to see the nuns stepping forward to teach the Dharma and to organize Dharma talks for the public.

December 19 Ven. Chodron spent some time connecting with Serkong Rinpoche and preparing for her conference presentation in the morning. After lunch, Ven. Chodron and I met with our friend and teacher Geshe Dadul who moderated one of the conference panels, and we went together to a two-hour meeting for the conference participants. It was really amazing to see all the Western and Tibetan scholars together in the same space. The amount of knowledge and commitment to the Dharma in one room was inspiring.

International Conference on the Life, Thought, and Legacy of Tsongkhapa

You may enjoy reading an account of the first morning on His Holiness’ website. There is also a video of His Holiness’ keynote address here.

Each afternoon, there were two, two-hour sessions with five to six speakers giving 15-minute presentations each on a topic related to Je Rinpoche’s life and work. Half the speakers were Tibetans—which included two geshemas—and the other half was mostly Western academics.

The presentations were intense and excellent, but marred by a faulty PA system. Worst of all, the professional sound crew disappeared during Ven. Chodron’s talk so the monks filled in and gave her a makeshift microphone. While the Western audience could hear her talk, there was no translation into Tibetan and no sound on the live stream. This continued into the next talk by a geshema from Jangchub Choeling before conference chair Thupten Jinpa managed to get the sound crew to report back.

Nonetheless, Ven. Chodron’s presentation was very well received as she spoke on how Je Rinpoche’s teachings have helped to clarify misconceptions people have about compassion. She spoke strongly about ethical conduct being the prerequisite for compassion and bodhicitta, and stressed the need for monastics—especially monks who teach overseas—to keep good ethical conduct. I recorded her talk. After it’s edited, we’ll post it to ThubtenChodron.org. 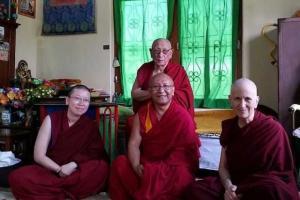 December 23 to 24 Ven. Chodron visited with a number of her teachers and was grateful for the opportunity to clarify difficult Dharma questions with them. Samdhong Rinpoche was especially generous with his time and wisdom, as was Geshe Palden Drakpa.

It was a beautiful rain of Dharma and we are so grateful to Geshe Dadul for translating. We also visited Geshe Thabkhe, who was being cared for by Geshe Yeshi Lhundup—both have taught at the Abbey and are scheduled again in 2020. (See the Event Schedule for info.)

On December 24 we took the overnight train to Bangalore and spent the day with Ramesh’s family and other friends. We enjoyed learning a lot about Indian history and society, including the situation of the Dalits. India is seeing major protests regarding a proposed citizenship law that smacks of discrimination, which our friends (and we too!) are concerned about.

December 25 we took the overnight flight to Singapore. Two nights in a row with little sleep! But we did all right and had some rest in Singapore on December 26 (although we both nodded off over lunch while talking with the friends!)

As Ven. Chodron said when we touched down in Singapore, “I can’t believe we were just in India; it all feels like a dream.”

December 27 was another busy day including a brief meeting with the abbot of Bright Hill Temple (Kong Meng San Phor Kark See) who showed us their new four-story meditation center that opens in February. Hopefully Ven. Chodron can lead retreats there in the future!

That evening, Ven. Chodron gave an engaging talk to 700+ people at Bright Hill Temple on the Pure Land practice. Like all the talks of this tour, this one will be posted on ThubtenChodron.org soon.

We departed for the US on the morning of December 28 after a lovely send off by many Friends of Sravasti Abbey. What a wonderful group of people they are!

While most passengers were asleep, a flight attendant on Singapore Airlines spent some time asking Ven. Chodron questions about Buddhism.