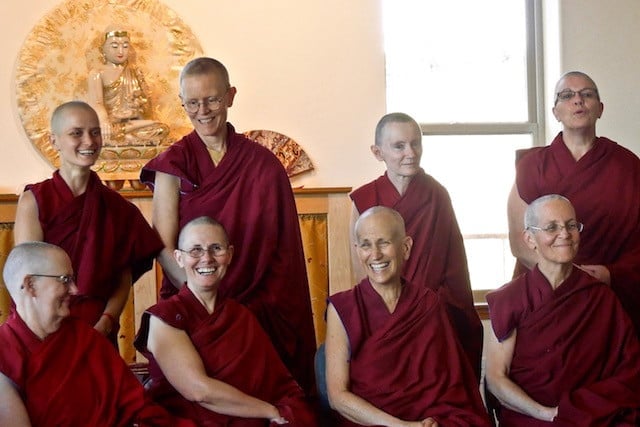 “Ask a Buddhist” is a recurring column on SpokaneFāVS, an online news source covering religion, spirituality, and ethics in the Inland Northwest of the U.S. Readers submit questions about Buddhist faith and meditation and Abbey monastics respond. Articles address everyday topics like handling disagreements as well as philosophical questions and wonderings about monastic life.

Click on the links below to read articles published from June 2018 to June 2019.

Have a question of your own about Buddhism? Submit it to SpokaneFAVS by clicking here.

• Animal Rebirth
Are all animals a result of negative karma in past lives and how can they leave this realm and achieve a more favorable rebirth?•

• Buddhism and Animals
Can you explain how a human would be reborn as an animal, and an animal as a human?

• Are Evil Spirits Real?
While the idea of an evil presence or evil force looms large in our Western culture, Buddhism takes a quite a different view.

• Buddha’s Commandments
Does Buddhism command you to love the Buddha?

• When Friends Disagree
I believe that true friends can disagree and still support one another overall.

• Daily Practice
What is the daily practice routine of a Tibetan Buddhist?

• Visiting a Buddhist Temple
What do you do when you go to a Buddhist temple?

• Is It OK to Go Fishing?
Are Buddhist allowed to pick up fishing as a hobby? If not, what are the reasons?

• Who, What is Buddha?
Shakyamuni Buddha, who lived 2,600 years ago, was once an ordinary being just like us.

• Desire for Enlightenment
It’s impossible to exaggerate the good qualities of liberation and awakening because their qualities are limitless.

• Raised in the Ways of the Buddha
If your dad has instilled Buddhist values as part of your life training, then you have a good ethical foundation to work from.

• What About Myanmar?
Your confusion about the contradiction between Buddhist teachings and the behavior of Buddhist monks in Myanmar is understandable.

• Monastic Robes
What are each of your robes called?

• Soul & Rebirth
How are memories, feelings, and other information passed and kept by the mind if no vessel exists to hold them?

• Recitation
What is recitation?

• Religion or Philosophy?
Depending on how we look at Buddhism, we may describe it as a religion, a science of mind, or a philosophy.