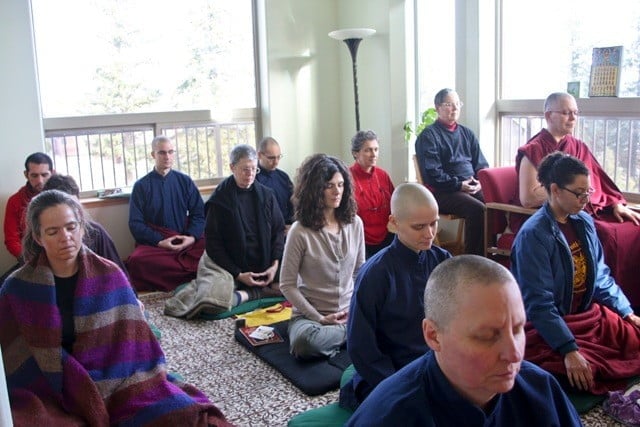 John attended the “Death and Caring for the Dying” course at Sravasti Abbey in May, 2010. While we were discussing the importance of having a virtuous attitude at the time of death, he shared how angry he becomes when he sees people texting when driving. But, he said, that’s not a very helpful attitude because if someone who was texting collided with him and he was killed, he would have a non-virtuous mental state, and no matter how much he was in the right about not texting while driving, being angry about it did not help him. What follows is an extract from a letter he wrote just after returning home from the course.

Thank you for the wonderful teachings this weekend. Before Jack and I got on the plane yesterday, I mentally went through the five powers from the mind training teachings in case the plane went down. I imagined taking on the suffering of each person in the plane and did my best to generate bodhicitta. I found this very useful to do before the flight. Then, last night I reflected on how to deal with the situation that was raised at the course regarding a plane crash or some other sudden death. I again contemplated the five powers before falling asleep.

When I sat on the cushion this morning and went through the preliminaries, I mentally said to myself that I would die today at the hands of a teenager texting, and I analyzed the scenario from all sorts of angles—my point of view, my partner’s point of view, the teenager’s point of view, her mother and father’s points of view, my mother’s point of view—and now I’m prepared for today. If a texting teenager hits me, my mind is prepared. If I make it home tonight, and moreover, if I wake up tomorrow, I’ll feel really blessed. This is why Tsongkhapa said that it is incorrect to think, “I could die today, but I’ll probably live.”

Here’s another hockey example. As you know, hockey pucks and hockey sticks can cause pain very quickly. When I sit down for even two minutes before I play and mentally imagine someone hitting me with their stick out of anger, or the puck hitting me in an unprotected spot, I just don’t react when it happens during that game. But, when I forget to prepare, I really react if I get hit. And that’s the point: if we mentally prepare every morning before our day as well as every evening before we go to bed, we’ll be ready for just about anything. It’s one reason I’m not too upset about receiving an e-mail today from an individual saying he was going to assassinate me unless I came up with a ransom of $70,000.00. I’m not kidding about this, and I will be meeting with the police here pretty soon.

I share this story in the hope that it may be useful to other practitioners. Thank you again. Words cannot express my gratitude and I promise to keep practicing the Dharma every day.