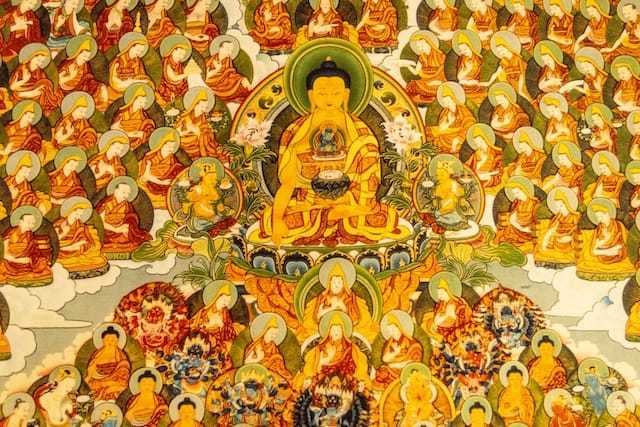 This excerpt from Approaching the Buddhist Path appeared in Sravasti Abbey’s September eTeaching, sent via email once a month. You can sign up to receive eTeachings on the form below.

from Approaching the Buddhist Path
by His Holiness the Dalai Lama and Ven. Thubten Chodron

In seeking out role models, I (Chodron) look to the Buddha himself.

In sūtra passages and in artwork, he is depicted in a variety of situations: sitting and meditating peacefully; speaking fearlessly to a crowd of non-Buddhists; tending to the needs of a sick monk; talking to merchants, courtesans, royalty, and paupers. He addresses one person gently and scolds a monk with wrong views.

He instructs that the food remaining from a meal offered to the saṅgha be given to the poor. In one instance, he praises the merit of a beggar who mentally offered the meal with a good motivation over the wealthy patron who actually gave the food but lacked a generous intention. He consoles a woman whose child died and those fearing the loss of their parents.

The Buddha sits under forest trees; he walks in towns. He spends time with others and is often alone. He speaks with men and women, monastics and lay. He knows how to address intellectuals, wandering ascetics, nonbelievers, the grieving, the impoverished, and criminals—the Buddha is everyone’s person. He fits no stereotype.

The Buddha engaged in so many diverse activities that he can serve as a role model for many different kinds of people with diverse interests. We can let go of the critical self-judgment that may arise if we aren’t among the best of the debaters or the most realized yogis. It’s important for each of us to find our own way of living a Dharma life while internally cultivating the same qualities of wisdom, bodhicitta, and so forth.

by His Holiness the Dalai Lama and Ven. Thubten Chodron
Wisdom Publications

* Tune in for livestream teachings every Friday at 6:15 pm PST on Approaching the Buddhist Path here.

* Pre-order Volume 4 in the The Library of Wisdom and Compassion, Following in the Buddha’s Footsteps here. The book will be released October 15, 2019.