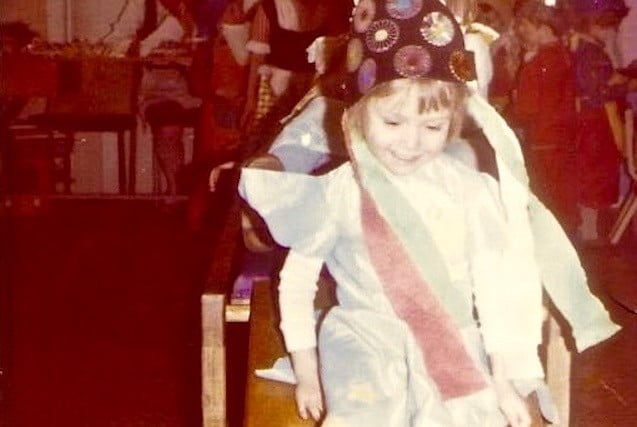 It’s Up to You: The rewards of joyous of effort

Venerable Thubten Jampa grew up in Germany, homeland of the Brothers Grimm, whose collection of popular European folk tales has influenced children for 200 years. Ven. Jampa has begun to recast these stories in a Dharma light. In the photo above, a very young, future Ven. Jampa is dressed as one of her favorite fairy tale characters, the pious little girl from the “Star Money” story. Ven. Jampa recently shared a re-telling of another Grimm’s tale, “Mother Holle.” You can watch her in this Bodhisattva’s Breakfast Corner talk or read it below. She also did the Hansel and Gretel story, which is here.

Many of us grew up on Grimm’s fairy tales. For some, these stories may have left a big impression on your young mind, as they did for me.

Today I want to share one of the Grimm brothers’ stories re-told from a Buddhist perspective. This tale emphasizes the role of our own effort when practicing the Buddhist path.

Do you know the story of Frau Holle?

Some translations call her Mother Hulde or Mother Frost. She’s very well known in Germany where I grew up.

Once upon a time there was a widow who had two daughters. One of them was kind-hearted and diligent; the other was reluctant and a bit lazy. The mother, however, loved the lazy one best, because she was her own daughter. The other girl was only a stepdaughter, and so she was made to do all the housework. She was quite the Cinderella of the family. Every day, the stepmother sent the diligent daughter out to sit by the well to spin yarn until her fingers bled.

Now it chanced one day that some drops of blood fell onto the spindle. As the girl stepped over the well to wash it off, the spindle suddenly sprang out of her hands and fell into the well. The girls ran home crying to tell of her misfortune, but her stepmother gave her a violent scolding and said to her harshly, “Since you have let the spindle fall into the well, you may go yourself and fetch it out.”

The girl went back to the well not knowing what to do. At last, in her distress, she jumped into the water after the spindle.

Some of us may have found ourselves in a similar situation. Our karma threw us into an environment that challenged us so much that we were in deep distress. Not knowing what to do or where to go, we may have followed a wrong path—taking refuge in drugs, for example, or boyfriends, or in overwork. And then we came to a point where we had so much mental pain we couldn’t go on. This is the turning point where we knew deeply that something had to change. This might have been the time when we jumped into the cold water, into unknown territory, and booked a ticket to Spokane to visit Sravasti Abbey to learn meditation and study Buddhism.

And then she awoke

The girl remembered nothing more until she awoke and found herself in a beautiful meadow full of sunshine, and with countless flowers blooming in every direction. She was at Sravasti Abbey,

She walked over the meadow, and presently came upon back kitchen door of Chenrezig Hall. Inside the kitchen she found an oven full of German bread, and the loaves cried out to her, “Hol uns hinaus, hol uns hinaus … Take us out, take us out, or alas! We shall be burnt to a cinder; we were baked through long ago.” So she found the kitchen mitts and took all the loaves out of the oven.

The girl went a little farther on the way to the garden, where she passed the old naga apple tree full of apples. “Shake me, shake me,” cried the tree. “My apples, one and all, are ripe.” So she shook the tree compassionately, and the apples came falling down upon her like rain. She continued shaking until there was not a single apple left Then she carefully gathered the apples together in a heap and walked on again.

After circumambulating the Buddha in the garden, she came upon Gotami House where the nuns live.There she saw several beings with bald heads wearing red clothing from top to bottom. That was quite an unusual sight for her. First she was terrified, and turned to run away. But one of the nuns called after her, “What are you afraid of, dear child of the Buddha? Stay with us; if you study, practice, and offer service with us diligently, you will be very happy. You must be very careful though, to have no complaints about our schedule, chanting, and food so that we all can beof greatest benefit to sentient beings.” The nuns spoke so kindly, that the girl summoned up her courage and agreed to fill out the long application form to stay as a long-term visitor.

The girl took care to do everything according to the nuns’ requests. Every time she diligently joined the nuns in study and meditation, the beings close and far away felt held in love and compassion. They knew that the nuns and guests at Sravasti Abbey practice every day with full devotion.

So the girl stayed on with the nuns for some time, but then she began to grow a bit unhappy. She could not at first tell why she felt sad, but she became conscious that she was longing to go home to share with her own people what she had learned, even though she was a thousand times better off with the nuns at Sravasti Abbey than with her mother and sister. Perhaps you could say she took care of her own well-being at the Abbey and now longed to share with her family what she had learned.

After a while, she went to the nuns and said, “I cannot stay with you any longer, for although I am so happy here, I must return to my own people to share with them what I have learned.”

The nuns said, “We are pleased that you should want to go back to your own people and share what you have learned. As you have studied, practiced, and offered service so well and faithfully, we will continue our work to benefit you and all others.”

Thereupon one of the nuns drove the girl to catch the shuttle. Arriving in Newport to meet the shuttle, the girl realized that she had gained tremendous riches that nobody could take away from her. It was more precious than any wish-fulfilling jewel.

“That is a reward of all your practice and generosity in being of service,” the nun said to her, and as she spoke, she handed her the book, Approaching the Buddhist Path, the first volume of The Library of Wisdom and Compassionseries by His Holiness the Dalai Lama and Venerable Thubten Chodron.

So, basically, her journey points out that through her own effort and diligence she made the most use of the Dharma and of her life. She was open and receptive, exhibiting some of the defining characteristics of a student who relies well upon her teacher and the teachings.

After a long, long drive the girl found herself back in the old world close to her mother’s house. As she entered the courtyard, the rooster who sat on the well, called out:

“Cock-a-doodle-doo! Your kind daughter’s come back to you.”

Then she went in to her mother and sister. As she was so enriched with all good qualities such as love, compassion, and wisdom, she received a warm welcome. She related to them all that had happened.

Let’s send the other one

When the mother heard how the girl had come by her great inner riches, she thought she would like her lazy daughter to go the Abbey as well. So she made the sister go and sit by the well and spin, then throw the spindle into the well, and jump in after it.

Like her sister, the lazy daughter awoke in the beautiful meadow at Sravasti Abbey, and walked over it until she came to the ovens in the Chenrezig Hall kitchen. “Take us out, take us out, or alas! We shall be burnt to a cinder. We were baked through long ago,” cried the loaves as before. But the lazy girl answered, “Do you think I am going to burn my hands for you?” and walked on.

Presently she came to the apple  tree near Ananda Hall. “Shake me, shake me, I pray; my apples, one and all, are ripe,” it cried. But she only answered, “A nice thing to ask me to do! One of the apples might fall on my head,” and she continued on.

At last she came to Gotami House where she was welcomed by the nuns and introduced in the same way as her sister had been.

The first day she was very obedient and diligent, and exerted herself to please the nuns, for she thought of the good qualities she should get in return. The next day, however, she began to complainover the work, and the third day she was more idle still. Then she began to lie in bed in the mornings and refused to get up. Worse still, she not only disobeyed the daily schedule but also complained about the food and chanting. So in the end nobody was really happy, neither the nuns nor the girl.

The girl still thought that just being at the Abbey should provide her with the inner qualities that she was aiming for without any effort, and she left with that illusion. One of the nuns drove her to the shuttle in Newport, as she had done with the her sister before her, but as the lazy daughter was entering the bus, instead of feeling enriched in qualities, she didn’t feel too good within. Due to the nuns’ compassion she was gifted with the book Buddhism:One Teacher, Many Traditions, the introductory book to The Library of Wisdom and Compassion.

“Maybe you will find inspiration in this,” said the nun, and the shuttle went off.

So the lazy girl had to go home feeling a bit odd within.

As she approached the house, the rooster on the well called out,

“Cock-a-doodle-doo! Your lazy daughter’s come back to you.”

A happy ending is up to you 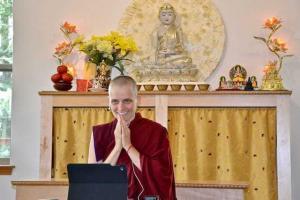 Once she was back home, some of the seeds the lazy girl had planted by observing the nuns at the Abbey came to fruition. She aimed for happiness but could not find it, so she started to read the book the nun had given to her and, indeed, felt inspired by it. Soon after, she made a conscious decision to think about and practice some of the teachings she had learned. With further diligence, she became just as happy as her sister and together they inspired many more friends and relatives to study the Buddha’s teachings and to apply them in daily life.

Everybody can do this. It’s up to us to change the route of our life. Even small steps can bring big results.