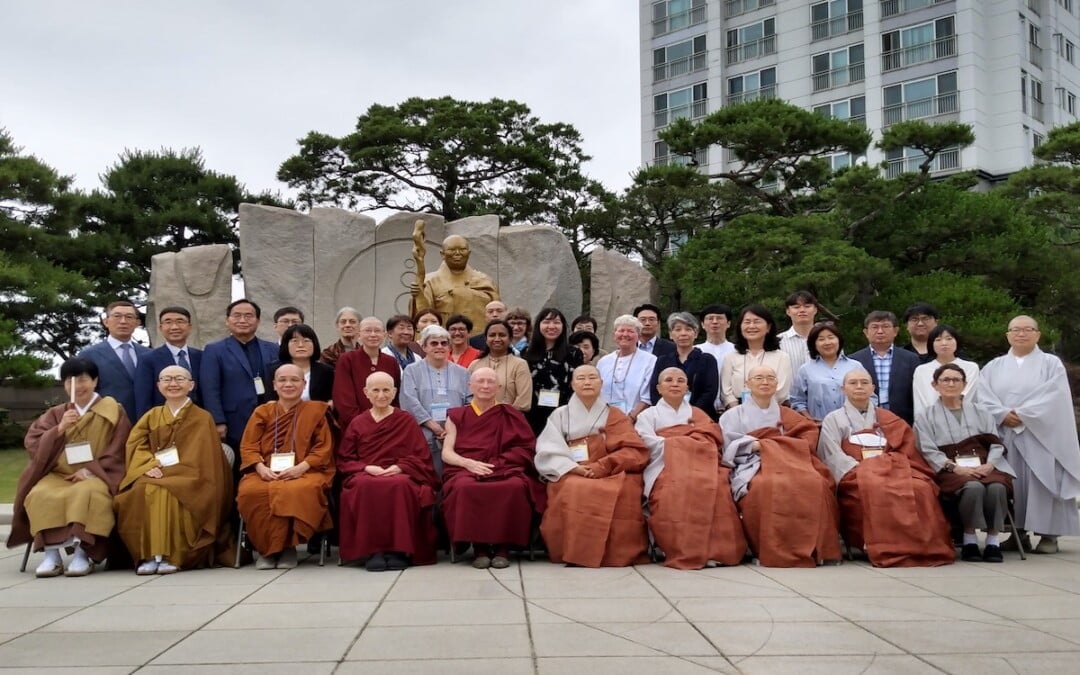 Last September, Sravasti Abbey abbess Venerable Thubten Chodron received an invitation to participate in an international conference hosted by Hanmaum Seonwon (One Mind Zen Center) in Seoul, South Korea. With  “Buddhist Nuns’ Sangha Around the World: Present and Future,” as the theme, the conference commemorated the 10th anniversary of the passing of Daehaeng Sunim, a renowned Zen practitioner and the female founder of Hanmaum Seonwon.

Ven. Chodron prepared a paper on “Western Buddhist Nuns in the Tibetan Tradition: Past, Present, and Future” over winter retreat.  Given the uncertainties of the ongoing Covid-19 pandemic, she was fully prepared to present it via video. Nonetheless, causes and conditions came together for Ven. Chodron to attend the conference in person. This marked her first trip abroad since the pandemic broke. Accompanied by Ven. Damcho, off they went to South Korea.

The conference took place June 17-18, 2022, at Hanmaum Seonwon’s headquarters near Seoul. Established in 1972, the organization now has 15 branches in Korea and 10 branches overseas, managed by a community of more than 150 monastics. While most of Daehaeng Sunim’s disciples are bhikshunis, she was unique in having bhikshu disciples as well.

The morning opened with conference presenters paying respect to the Buddha in the main Buddha Hall, followed by chanting of the Heart Sutra and Three Refuges. Monastic attendees from temples all over Korea sat in the main conference venue, while lay attendees watched the livestream in a separate room. After congratulatory speeches by senior monks from the Jogye Order of Korean Buddhism and the president of the Korean Bhikshuni Association, the first presenters stepped up to the podium. 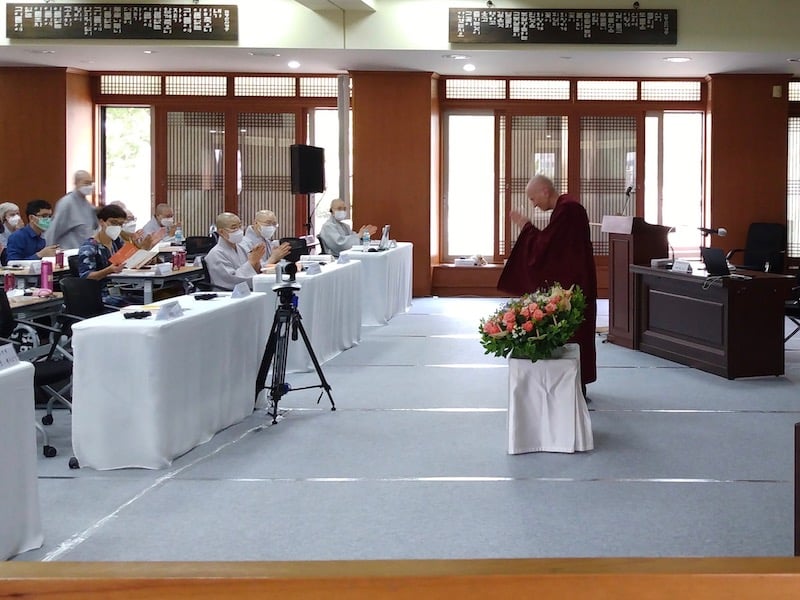 Nuns in the Tibetan Tradition

Venerable Karma Lekshe Tsomo delivered the keynote address on “Nuns in the Tibetan Buddhist Tradition: Transmission, Adaptation, Innovation.” She focused on the situation of Tibetan and Himalayan nuns. To everyone’s surprise, she revealed that the highest religious authority in Bhutan would  confer bhikshuni ordination to a group of Bhutanese nuns in a week’s time. Read about the historic ordination of 142 Bhutanese bhikshunis on June 21 here.

Ven. Chodron’s presentation filled out the situation for Western nuns in the Tibetan tradition. She also elaborated on why she had established Sravasti Abbey. Among many reasons. Ven. Chodron wanted to ensure that the next generation of Western monastics would have access to full ordination and proper training, not having to go through the same kind of struggles she had faced in her early monastic years.

The Zen Tradition and Nuns in East Asia

The morning presentations closed with the personal account of establishing Korean Buddhism in North America from Rev. Haju, the abbess of Ann Arbor Zen Buddhist Temple.

The afternoon presentations focused on Buddhist nuns in East Asia. There were two presentations on Japanese nuns—one on imperial Buddhist convents and their abbesses, and the other on ordained Japanese women in the modern era. Both papers were co-presented by academics and ordained practitioners.Together, they offered a range of perspectives on Japanese Buddhist women today, who hold diverse views about the importance of celibacy in the transmission of the Dharma.

The final presentation of the day was a pre-recorded video by Taiwanese Bhikshuni Changshen, who spoke about bhikshunis in three of the most prominent Buddhist monasteries in Taiwan and how they benefit society. 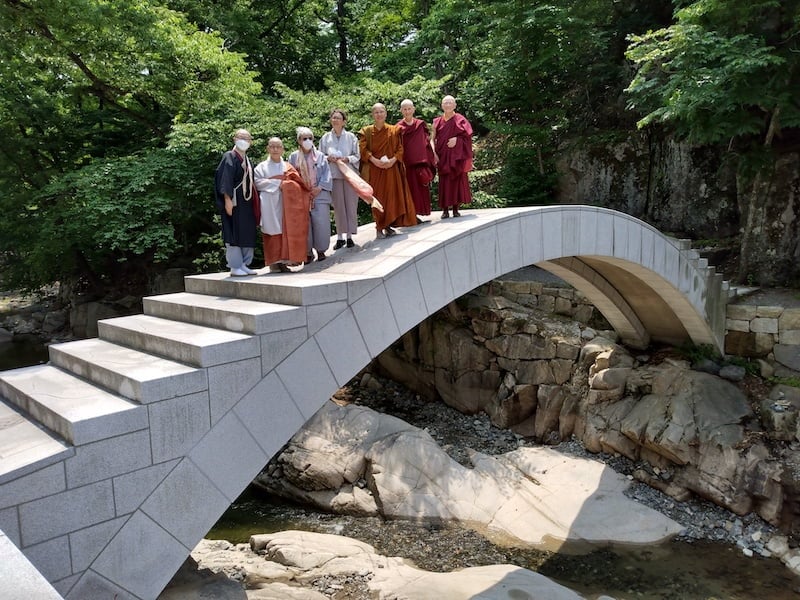 Nuns in Korea and Vietnam

The morning of the second day featured presentations on the situation of Korean bhikshunis. President of the Korean Bhikshuni Association, Bongak Sunim spoke about the results of a survey of Korean bhikshunis. She spoke frankly about the challenges faced by the Korean bhikshuni sangha, highlighting the effects of an aging population and the need to balance temple management duties with monastic education. Hyeseon Sunim from Hanmaum Seonwon offered an overview of the organization’s ongoing and future Dharma propagation efforts. Next, the sole male academic presenter put forward a positive view of the present and future prospects of the Korean bhikshuni sangha. In compliance with Korean government requirements, foreign presenters who arrived on June 16 were whisked away to the airport after lunch to take a PCR test within three days of their arrival. They returned in time for the afternoon presentations, which focused on the nuns in South and Southeast Asia. Ven. Lieu Phap from Vietnam spoke on Vietnamese bhikshunis in the Theravada  traditions (The majority of Buddhist nuns in Vietnam practice the Mahāyāna). The last set of presentations by women academics on Buddhist nuns in Myanmar, Sri Lanka, and Thailand were inspiring in their commitment to fieldwork and articulating the lived realities of nuns in these countries. All these excellent presentations were livestreamed, albeit with simultaneous Korean translation. Watch the Day 1 presentations here, and Day 2 presentations here. The Hanmaum Seonwon team celebrated a successful conference at a closing banquet at the hotel for the presenters and main organizing committee. 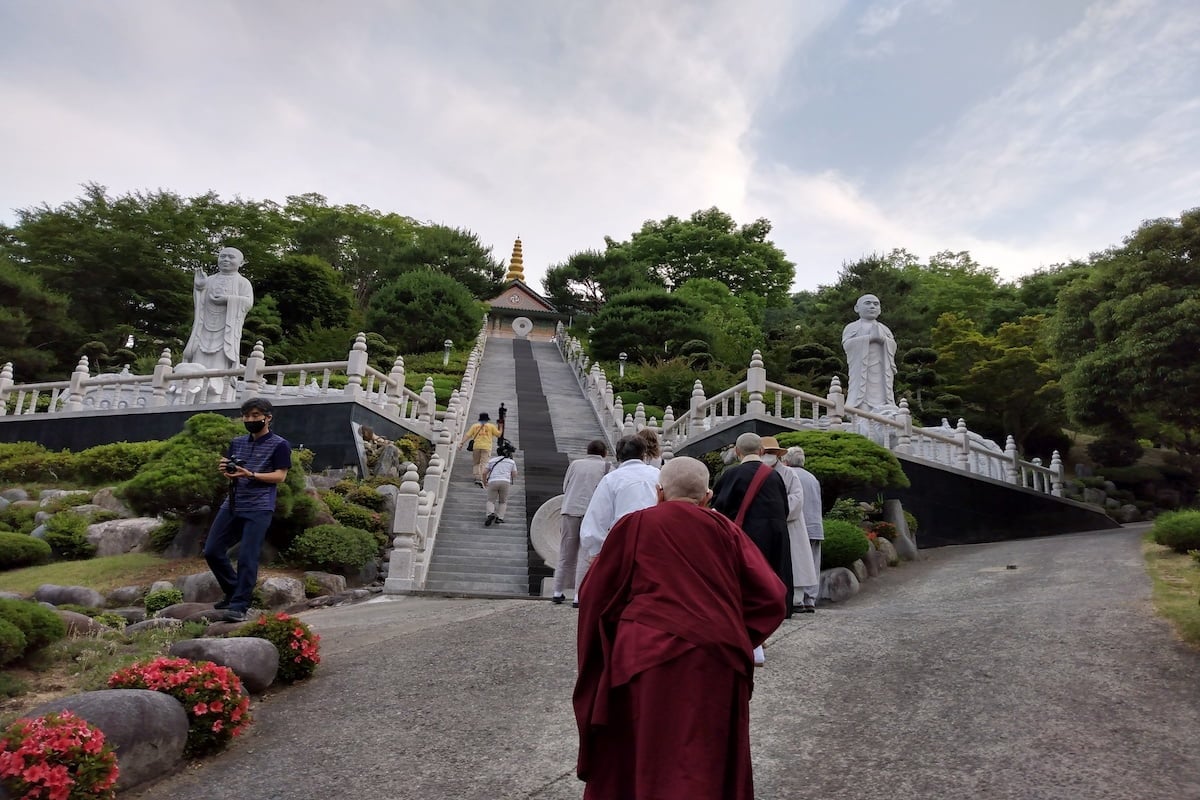 After two days of immersion learning about Buddhist nuns worldwide, Hanmaum Seonwon pulled out all the stops to organize a two-day tour of historic Korean temples and major Hanmaum Seonwon branches. Most of the foreign presenters stayed on for the tour and continued rich discussions about each other’s presentations on the train and bus rides.

The tour began with a visit to Tongdosa, a 7th century temple that houses Buddha relics and a traditional outdoor monastic ordination platform. Designated a UNESCO World Heritage Site, it is also the main temple of the Jogye Order.

The group had an audience with the 82-year-old patriarch of the order, Ven.  Seongpa Sunim, who offered reflections on the relationship between Buddhist study and meditation. Also a renowned artist, Ven. Seongpa has created numerous artworks ranging from a ceramic version of the Tripitaka to beautiful scarves that he offered to each participant on the tour.

Ven. Chodron asked him for a momento as an auspicious indication of the pure Buddhadharma spreading to the West. He gifted one of his bowls, which will be kept at the Abbey. Though our time together was short, everyone was moved by his wisdom and kindness. 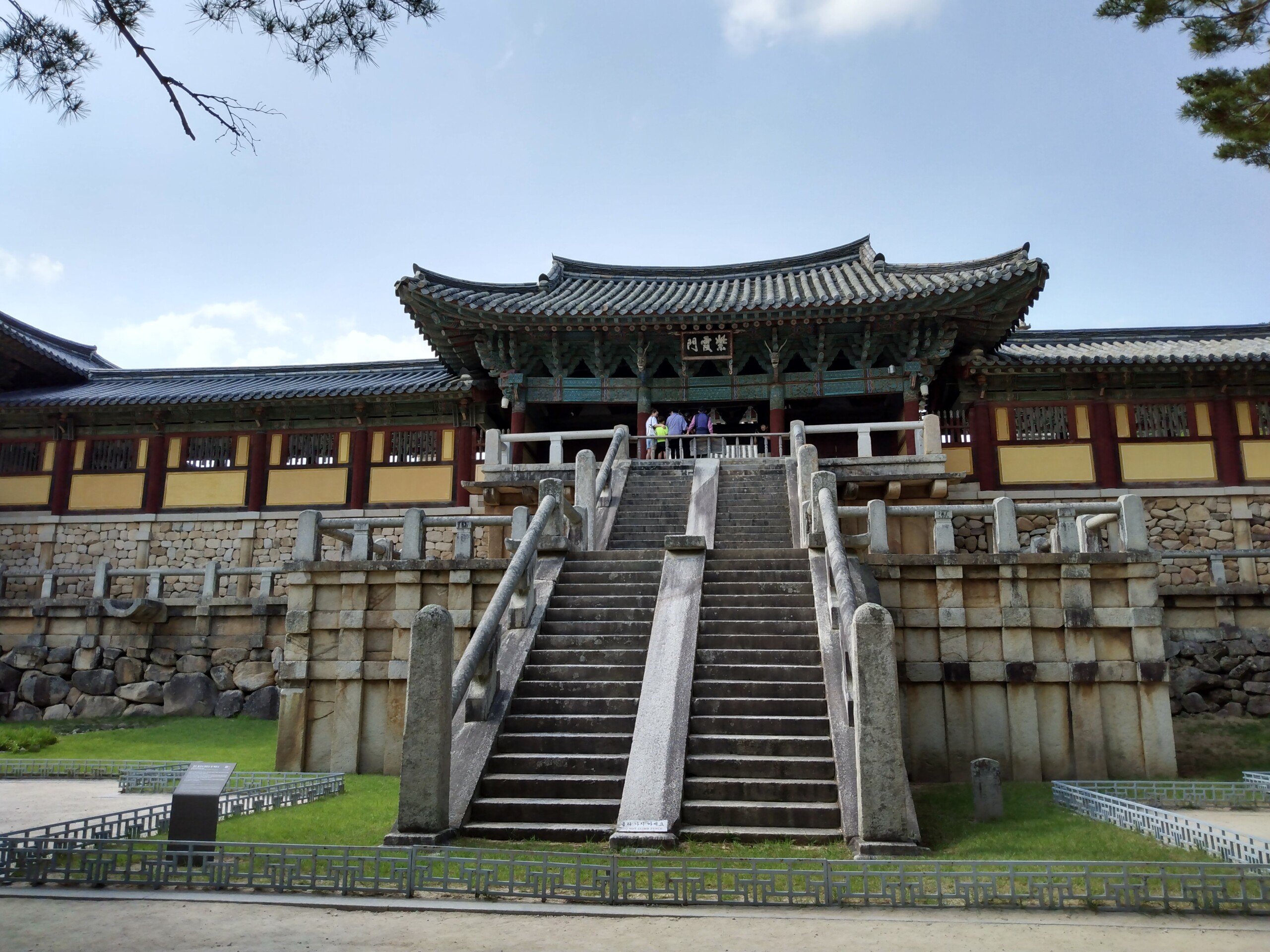 En route to the 8th century temple, Bulguksa, the group stopped for lunch at the Ulsan branch of Hanmaum Seonwon and was treated to a spread followed by a rousing choir performance. Each of the Hanmaum Seonwon branches has a choir with a repertoire of Daehaeng Sunim’s teachings set to music.

At Bulguksa, we were met by a tour guide who introduced key features of the site, such as the various halls dedicated to different bodhisattvas, and two large pagodas.

The highlight of the day was visiting Seokguram Grotto nearby, where a magnificent large Buddha surrounded by bodhisattvas, arhats, and deities were carved out of white granite in the 8th century. The caretaker monks from the temple by the grotto were so kind as to open up the usually enclosed space for the group to circumambulate the Buddha and sit in meditation.

After a full day admiring these UNESCO World Heritage sites, the group retired to the Hwangryongwon Hotel, built in the style of a historic Korean temple. The temple grounds included a nine-story wooden pagoda. 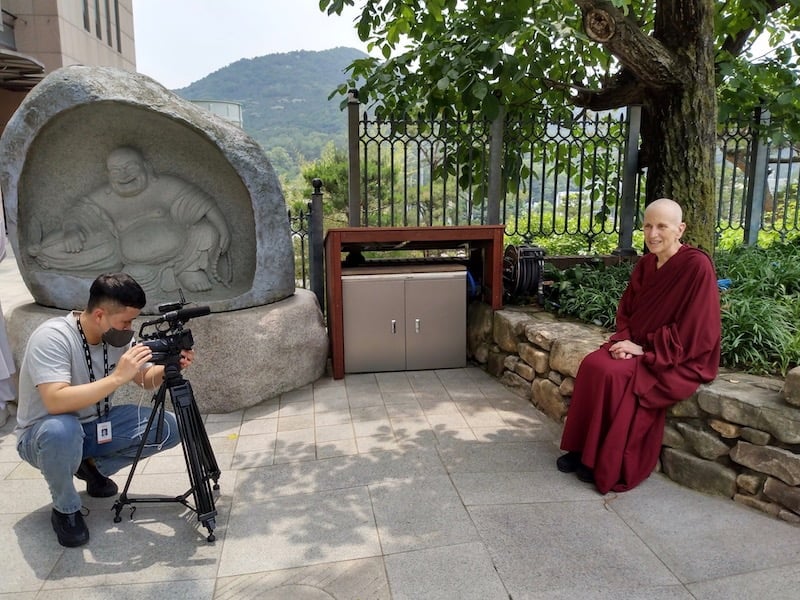 The next morning, Vens. Chodron and Damcho enjoyed wandering the temple grounds, taking photos of landscape features that might inspire the design of the Abbey’s future Buddha Hall.

The second day of the tour passed quickly with visits to the Buddhist Dongguk University, and the Hanmaum Seonwon temples in Busan and Jinju. At each stop, the group was met with great hospitality and a seemingly endless supply of tea and Korean delicacies.

On the final day back in Seoul, Ven. Chodron gave an interview at the Buddhist Television Network. A crew from the station had visited Sravasti Abbey back in 2009—watch their interview with Ven. Chodron here.

More than ten years later, Ven. Chodron responded to their follow-up questions about Buddhism in the West and how things are developing at Sravasti Abbey. We’ll let you know when the interview is broadcast. The interview was conducted by Korean nun Hyeju Sunim, a professor at Dongguk University, and the two bhikṣuṇīs had a lively exchange. We were warmly received by the production team as well.

After a very full five days in South Korea, we returned to the Abbey with a suitcase full of books and gifts—including a special one for the Abbey’s newest “resident,” Buddha Bear.