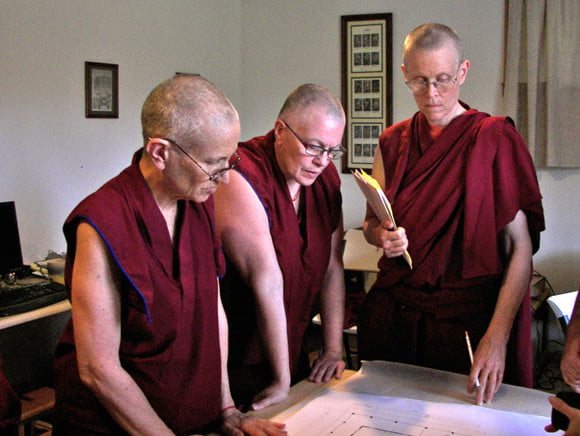 Named for the Buddha of Compassion, Chenrezig Hall, when finished in a year, will provide an array of facilities for growing numbers of guests. 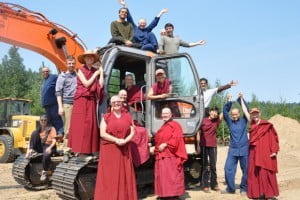 The community and guests celebrate groundbreaking for Chenrezig Hall.

At 9,882 square feet, the building will provide a kitchen and food storage facilities, a large dining room, a guest library, and guest sleeping rooms. It also will include a small chapel, and rooms for meetings, classes, and spiritual counseling.

“We want this building to radiate compassion,” said Tibetan Buddhist Nun Venerable Thubten Chodron, who founded Sravasti Abbey in 2003. “It will be the hub of activity when it’s completed, and the first stop for guests when they arrive at the Abbey. When they come, we want visitors to be welcomed by the open arms of the Buddha of Compassion.” Construction began in September, and the project is expected to cost about $2 million.

“Like all Abbey projects,” Ven. Chodron said, “Chenrezig Hall will be built through the kindness and generosity of Dharma friends everywhere.”

Over one-third of the funds—$850,000— have been offered as of December, 2012. The Abbey is actively inviting generosity to complete Chenrezig Hall as soon as possible.

“Chenrezig Hall is much more complicated to build than Gotami House was,” Ven. Chodron said. “It’s nearly three times the size and is classified as a commercial building, whereas Gotami House was a residence. We’ve had input from several engineering specialists to lay out the geothermal heating system, septic system, and so forth, and to plan the commercial kitchen. The whole process is complex and very exciting.”

In keeping with the Abbey’s commitment to thoughtful stewardship of the land and resources, we selected a builder, George Weaver of Alpha & Omega Construction, who is experienced with “green building” principles. 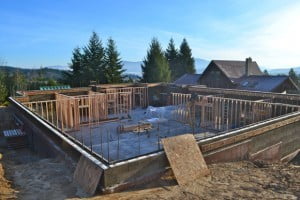 Framing begins for the first-story rooms, which include the Kwan Yin entryway, chapel, and women’s guest rooms.

For example, Chenrezig Hall is being constructed with Faswall, a “formed wall system” of blocks made from mineralized wood, a composite of wood from recycled wood pallets and concrete. Faswall is durable, environmentally friendly, virtually fire proof, and is not susceptible to insects, rodents, or rot.

We are also installing a geothermal heat pump system, which relies on the earth’s natural temperature to support heating and cooling the building.

“When I ordained 35 years ago, I never imagined building a monastery in the West and having to learn about the many things involved in doing so,” Ven. Chodron said. “But they say that bodhisattvas will learn anything to benefit sentient beings, so that is a comfort when we go from choosing building materials, to thinking about their ultimate nature.”

Sravasti Abbey’s resident community has grown steadily since its founding in 2003. The Abbey’s master building plan projected that the community would eventually outgrow the 3,000-square-foot residence that came with the property.

In 2008, pressed for residential space, the Abbey remodeled the kitchen and dining room, increasing seating capacity to a jam-packed maximum of 24. We also built Gotami House, a residence for nuns and lay women. 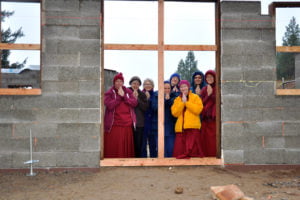 Rejoicing in the progress, as the structure rises.

With 13 residents (eight are nuns), our living and workspace are again becoming increasingly cozy. However, it’s the rapidly increasing number of guests that has prompted construction at this time.

In recent years, Sravasti Abbey has seen 750 to 900 individual guest visits per year, with retreats and teachings filling to capacity. Last winter’s long retreat brought the tipping point, when 28 meditators crammed into the dining space (which also doubles as a Dharma classroom) for three meals each day for a month. Clearly, the time had come to begin Chenrezig Hall.

“Chenrezig Hall is principally for our guests,” said Ven. Chodron. “Of course there will be many advantages for the resident community too, but the real need is for guest space.”

The project is continuing what has become a Sravasti Abbey tradition: The Buddhas arrive before the buildings do.

Back in the early 2000s, when Ven. Chodron had begun looking for a site to establish the training monastery His Holiness the Dalai Lama had already named Sravasti Abbey, she got a call.

During the conversation, friends at Shasta Abbey in California told her that someone had offered some Tibetan-style paintings of Buddhist deities, but being a Zen monastery, they didn’t have a use for them. Could she give them a good home?

Thus Manjushri, Buddha of wisdom, and Maitreya, Buddha of loving kindness, came to Sravasti Abbey before the monastery had a physical home. Today these two paintings hang to the right and left of the central Buddha image in the meditation hall, on Sravasti Abbey’s 240-acre property north of Spokane, Washington.

Last year, it happened again. As the Abbey community began to take the first steps toward constructing its new Chenrezig Hall, an anonymous benefactor (and a complete stranger to the Abbey) offered the funds to place a life-sized statue of Kwan Yin—the Chinese expression of the Buddha of Compassion — at the entryway. Today, as the walls of the new building are rising, the Abbey team is searching for a suitable Kwan Yin.

“People want to learn and practice the Dharma deeply,” Ven. Chodron said. “They want to transform their own hearts and minds, and they need a place to do this. That’s why we’re building Chenrezig Hall.”