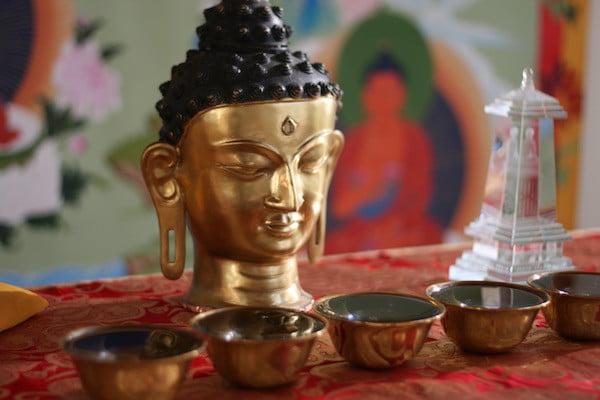 Vesak Day is an observation of the birth, enlightenment and passing away (Parinirvana) of the historical Buddha. It’s a celebration of the Buddha’s qualities of wisdom, compassion and skillful means as well as our own aspiration to develop those qualities. As Venerable Chodron said in one of her teachings: “it’s a day of great hope and optimism seeing the potential in ourselves to become Buddhas.”

The historical Buddha was born in Lumbini, to Queen Maya, on an auspicious full moon day. He was destined to rule a country, as the son of a king, but decided instead to pursue a spiritual life. He attained full awakening at the foot of the Bodhi tree, after vanquishing his own afflictions and ignorance. He then taught for 40 years, wandering the countryside and gathering a large following of monks and nuns. At the time of his Parinirvana, the Buddha asked his followers not to weep for him but rather to remember his teachings and devote themselves wholeheartedly to them.

The exact date of Vesak varies depending upon which calendar is followed. Some countries follow the lunar calendar and others the Gregorian calendar. This year, according to the Tibetan lunar calendar, the day falls on June 9.

Vesak is celebrated in different ways around the Buddhist world. In some countries, lanterns are lit and released into the sky, as offering of light to the Buddha. Lay followers gather at temples to offer prayers, food and incense. Many, if not most, practitioners take the Eight Mahayana precepts on that day and make monetary donations to temples, monasteries and dharma centers. Even the United Nations observes Vesak at their headquarters and offices.

All merit accumulated on this special day is multiplied 100 million times.

Below are some examples of how we can celebrate Vesak and accumulate merit on this auspicious day.

Another way to make merit this year is to support the building of Prajna House, a residence for our teacher and Abbess. You can make a Vesak Day offering here.