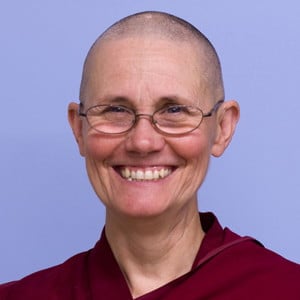 Ven. Thubten Chonyi began attending classes with Venerable Thubten Chodron at Dharma Friendship Foundation in Seattle in 1996 and has practiced steadily under Venerable’s guidance ever since.

She was a founder of Friends of Sravasti Abbey, which formed in 2003 to support Ven. Chodron’s dream to start a monastery. She moved to the Abbey in 2007 and took śrāmaṇerikā and śikṣamāṇā precepts in May 2008. See photos of her ordination.

At the Abbey, Ven. Chonyi is involved with publicity and inviting generosity. She also shares Buddha’s teachings at the Abbey, online, and, occasionally, at Buddhist centers in the US and abroad. She has co-taught meditation and Buddhist ideas at the Unitarian Universalist Church of Spokane for 13 years, and especially enjoys interfaith exchange and bringing Buddhist values into social justice issues.

Ven. Chonyi’s formal education was in theatre at Wesleyan College in Macon, GA. She worked for many years as a performer, publicist, fundraiser, and producer in the performing arts. As a Reiki teacher and practitioner for 19 years, she co-founded two Reiki centers and the Reiki AIDS Project, and led classes and workshops in Europe and North America. She was communications director for the international The Reiki Alliance and served eight years as Managing Editor for Reiki Magazine International.

Back to Community Members
View Calendar