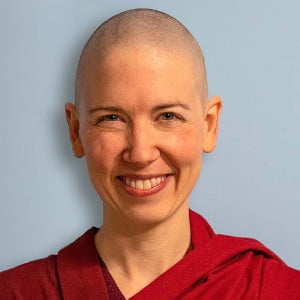 Ven. Thubten Rinchen met the Dharma at the Drepung Loseling Monastery in India in 2015, and then studied and practiced at the Drepung Loseling center in Atlanta, where she took refuge with Geshe Dadul Namgyal. She met Venerable Chodron during a trip to India in 2016 and was able to first visit the Abbey in 2017.  After another short winter visit, she was able to spend much of the summer of 2019 at the Abbey, including attending the Exploring Monastic Life program.

While Ven. Rinchen initially put her monastic aspirations on hold for opportunities in Atlanta and India, the COVID pandemic provided a helpful reminder about the impermanent and unsatisfactory nature of samsara. She moved to the Abbey in August of 2020 and began Anagarika training in October of that year. After a fruitful discernment period, she requested ordination and received her Shikshamana ordination at the Abbey from Venerable Chodron in August of 2021. See photos here and here.

Prior to coming to the Abbey, Ven. Rinchen was involved in the Emory-Tibet Science Initiative, which provided many opportunities to travel to the Tibetan Monasteries in India to teach physics to monks and nuns, which she did every summer from 2015 to 2019.  She taught physics at a college in Atlanta, and performed research in medical physics.

At the Abbey, Ven. Rinchen is part of the finance team, facilitates SAFE, assists with IT, and keeps the website running.  She also enjoys caring for the kitties, tending the vegetable garden, studying Tibetan, and cooking Indian food. 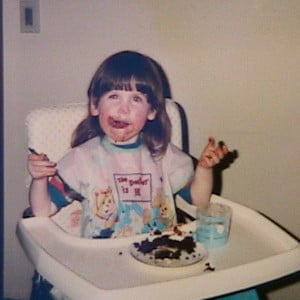 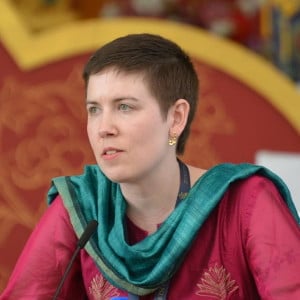 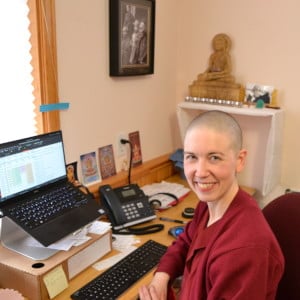