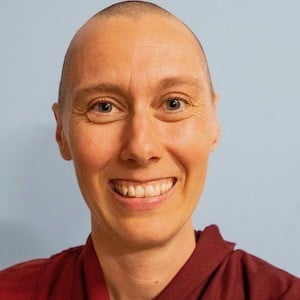 Venerable Thubten Dekyi grew up in Olympia, WA and earned a Bachelor of Science degree in Natural Resource Management and Wildlife Ecology from Washington State University.

For several years she led a seasonal life working in many places throughout the Northwest doing stream, plant, and wildlife surveys and skiing in the winter. She has been interested in Buddhism since she was 16 but never had a teacher or Dharma center until 2006. While living in Sandpoint, ID,  she saw a flier that a Buddhist nun, Venerable Thubten Chodron, was teaching nearby in Newport, WA.

Being greatly inspired by Venerable Chodron and the residents at Sravasti Abbey, the future Ven. Dekyi attended retreats and offered service while continuing to live less than an hour away in Sandpoint.

Wanting to do something more with life than be a ski bum and seasonal wildlife technician, she served in the Peace Corps in Ethiopia from 2012 to 2014. To pay off student loans and to fulfill her dream of becoming a Wildlife Biologist, she then worked for the US Forest Service in Newport, Oregon. This was a funny twist of coincidence since deep down she knew she wanted to live at the Abbey in Newport, WA.

After joining in a one-month Vajrasattva retreat at the Abbey in 2019, she decided to take the leap and move to the Abbey, which she did in October 2019. She trained as an anagarika for 11 months, and then received novice ordination on October 7, 2020.

At the Abbey, Ven. Dekyi continues to use her knowledge and passion of natural resource management to help restore the health of the Abbey’s forest, to reduce risk from wildfire, and to improve wildlife habitat. She is also learning to help with the Infrastructure Team with tasks that include unplugging sinks, driving the tractor in the winter for snow plowing, and all sorts of other fun and random tasks. 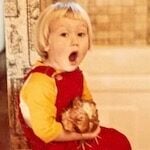 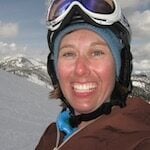 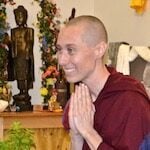