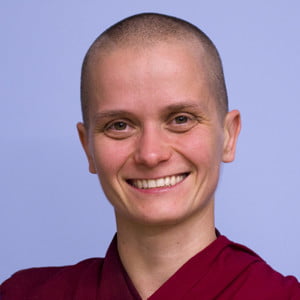 Venerable Thubten Jampa was born in Germany and met the Dharma at the beginning of her university studies in Berlin in 1999. She took refuge soon after and felt a strong aspiration to ordain as well. Meditation and studying the Buddhist teachings furthered her aspiration to ordain.

After finishing her Master Degree in Social Science in 2004, she worked for a non-governmental organization that advanced human rights in Tibet. But soon she discovered that social and political engagement are important but not sufficient to effect deep transformation. One also needs to work on inner development as an interdependent part of society.

Drawn to deepen her meditation practice, in 2006 she lived for several months in a Zen monastery in Japan to explore the monastic path. Many hours of meditation sessions brought clarity and firmness to her mind that a monastic lifestyle is what would give most meaning to her life.

Ven. Jampa moved back to Hamburg, Germany and worked and studied at the Tibetan Center in Hamburg. There she completed the 7-year systematic Tibetan Buddhism study program and received further teachings from His Holiness the Dalai Lama, His Eminence Dagyab Rinpoche, Geshe Lobsang Palden, Jhado Rinpoche, and Geshe Pema Samten.

She also studied with several Western teachers, such as Bhiksuni Jampa Tsedroen. However, there was no monastic community in Europe at that time that could provide Ven. Jampa with a thorough monastic training, so she decided to go to Sravasti Abbey where she has been studying and practicing since 2011.

What’s most compelling to Ven. Jampa about living at Sravasti Abbey is the thriving monastic community that provides a conducive training environment for monastics, engages in all the Vinaya practices, and integrates them into everyday life.

Ven. Jampa received her Anagarika (training) vows from Ven. Thubten Chodron in 2010 and her novice ordination in January 2013. See photos of her ordination here. In 2016, she received her full ordination, along with Ven. Damcho, at Miao Fa Temple in Taiwan. See the photos here.

Ven. Jampa is currently the events manager and chief photographer and photo manager at the Abbey. She is the creative sources behind our Instagram page and helps with facilitating the online Sravasti Abbey Friends Education courses.

One of the ways she shares her compassion in action is by representing the Abbey in local environmental protection events. She coordinates the Abbey’s recycling program with local volunteers. She also encourages discussions about the community’s environmental impact and how to minimize our footprint. 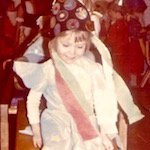 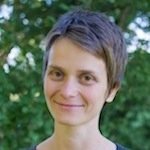 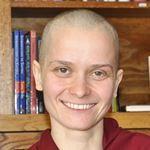