The Dharma has Taken on a New Look for Me

Robbie Groves has been interested in the Dharma since he was young, and first came to the Abbey in 2008 when he was sixteen. Here are his reflections in 2010 on how the Dharma looks new to him.

After reading a lot of Dharma books for many years, I’ve decided to start contemplating them more deeply now. I have been meditating on the Lamrim daily and can already notice a change (I can’t believe it’s only been a month). But I can also see how far I’ve got to go. For instance, I don’t think I’m even at an “initial level practitioner” scope, at least, on the gut (realization) level. I have to work to incorporate a Buddhist worldview into my life, every day.

Recently I’ve been working to transform skepticism. I’ve distinguished the difference between what I call “blind” doubt (doubting things “just because,” actually it’s quite similar to blind faith) and a healthy curiosity that I can use to treat Dharma principles with reasonable and logical analysis. In that way, I’ll be able to accept the Dharma with conviction and confidence, and live it everyday.

This has made my Dharma practice richer and more exciting. For instance, I often saw water-bowl offerings and prostrations as “devotional” practices, but by making an investigation, I now see them as opportunities to transform my mind. When I make offerings, it not only helps me to overcome attachment and develop generosity (the first far-reaching practice and an essential step on my path to liberation), but by seeing the positive qualities in the Buddha, Dharma and Sangha, I can work to develop them within my own mind. 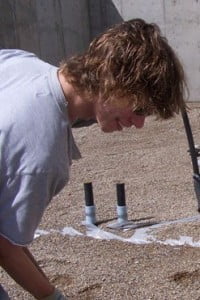 In addition, each bowl gives me the chance to meditate deeply. For instance, since incense represents ethical conduct, I reflect on the need for ethical conduct as a means for controlling the coarser aspects of my body, speech and mind so that I can focus on subtler ones. This will lead to concentration and I can then use that concentration to develop the wisdom of emptiness and progress towards liberation. In this way, offerings become a meditation in themselves and it usually takes me about twenty minutes to go through. I hope this doesn’t seem trivial because it has really helped me.

Similarly, instead of prostrations becoming a blind “act of devotion,” it has become transformative for my mind. I focus on a particular aspect of the Buddha as the object of refuge, e.g. the historical Buddha and his example as inspiration, the aspects of his enlightened mind, and my own Buddha-nature. Let’s say I focus on my Buddha-nature. When I reflect on my deepest level of awareness non-conceptually realizing the nature of phenomena and the non-duality of subject and object, instead of the white light emanating from the Buddha “magically” purifying all the previous destructive acts of my body, speech and mind, it’s that wisdom of emptiness cutting those subtle latencies at the root.

I’ve also been dealing with what Alexander Berzin calls “wego”. Having realized the disadvantages of self-cherishing (our ego mentality), we then turn into a a group ego, or “wego,” mentality. “I’m a Buddhist and we’re Buddhists, and we’re so right and all of you are wrong!” Now of course, my mind hasn’t thought in terms this coarse but I’ve had to confront tendencies in that direction.

It reminds me of my first visit to a Dharma center when I was 15. I was really surprised at the attitude everyone had: “Who are you? Don’t you know this is how this sangha works? No, no, this is how we say the prayers. We recite them in Tibetan.” Or what I call the Refuge Club: “My Refuge name is Tenpa Dhundrup, what’s yours? Oh, you haven’t taken Refuge yet? Then you can’t be a Buddhist, not like Us.”

I realized I wasn’t being much better, that obviously my meditations on everyone wanting to be happy equally (even though they may have confused ways of going about it), equanimity, bodhicitta, emptiness, etc. weren’t hitting me at the heart level. So now I’m trying to approach the Christian fundamentalists where I live with more compassion and understanding.