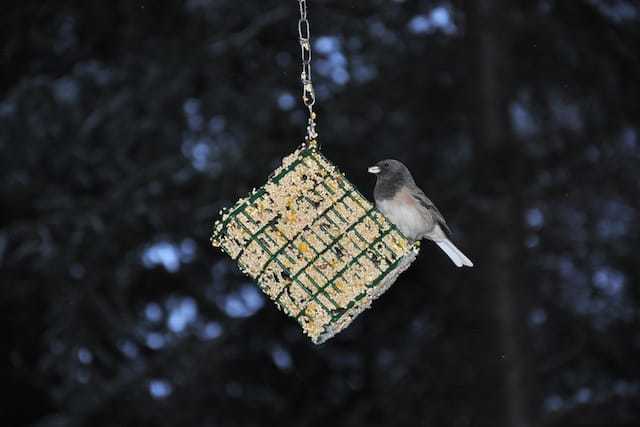 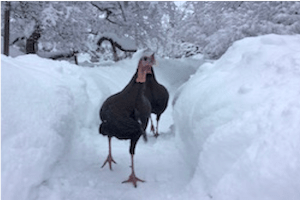 During the months of our winter retreat, there is little to write about because externally each day is pretty much the same; we follow the daily schedule with many meditation sessions and a time for study.

Internally there is lots of change and purification as we let go of negative thoughts and emotions, generate constructive ones, and contemplate the Buddha’s teachings.
Although January was moderate in terms of temperature and snowfall, February made up for it. We’re thankful for the cold temperatures and snow as that helps the forests and staves off summer fire danger. Occasionally the wind blew while snow fell, bringing snowdrift, and sometimes after the snow stopped the wind arose, creating beautiful snow swirls in the air.

Meanwhile we helped out the deer and the turkeys by giving them some food to supplement their daily search. They are our friends!
Enjoy our Winter Retreat photos here and here. 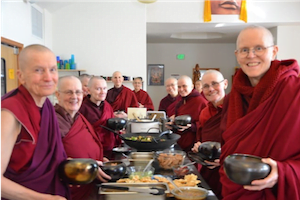 For most people the New Year comes but once annually, but at the Abbey we celebrate two and sometimes three times: on January 1, when we have a Vajrasattva purification retreat in progress, and again on Losar—the new year in the Tibetan lunar calendar—and on Chinese New Year, which is tracked on the Chinese lunar calendar. The latter two are often a month apart, but this year they both fell on February 5. You can watch Ven. Sangye Khadro’s Bodhisattva’s Breakfast Corner talk about Losar and Chinese New Year here.

Ven. Chodron and the Abbey have a strong karmic connection with Buddhists in Singapore, where Chinese New Year is the grandest holiday of the year. For many years now, our Singaporean friends have asked us to do a special puja on this day and dedicate merit for their good health, harmonious relationships, good rebirths for recently passed relatives, and so on. This year we did a Lama Chopa puja, making many beautiful offerings to all the Buddhas and bodhisattvas. We end the ceremony by reciting the names of the prayer requesters, along with their fervent wishes. Listen to Ven. Chodron’s motivation for the puja here.

Jason from Singapore made a special Chinese New Year offering to provide a meal for the sangha, which local friends Kuni, Mui, Rachel, and Terri happily (and scrumptiously) provided. Kuni is in the process of opening a restaurant in Spokane. She wrote to us afterwards: “Right after we got back, we got good news. Construction permit was approved. We did create a lot of merit!”

We rejoice in the faith all of these friends have in the Dharma and appreciate their generosity. We wish them and everyone a compassionate Year of the Earth Pig! Photos are here. 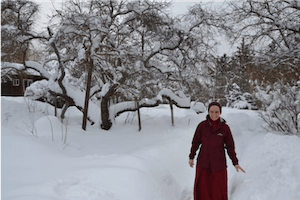 Motivated to Do Retreat

Since the Abbey’s beginning, during morning meditation each day, one of the nuns (or occasionally lay guests) gives a motivation to remind everyone of an important Dharma point.

One of Ven. Jampa’s motivations during retreat was based on the advice of Ven. Huimin, President of the Dharma Drum Institute of Liberal Arts, whom we rely on as our Vinaya Master during varsa, our Vinaya retreat in the winter. He told the community, “Last time [we met], I shared the greatest thing that I ever learned: to respect everybody, no matter whether they respect us or not.” Ven. Jampa elaborated on this here.

Ven. Chonyi also used this platform to share her thoughts on a sad event involving a turkey in “Hawk, Turkey, Nun,” as the animals on the Abbey property continue to be our Dharma teachers. Read her reflection here.

Outside of the hall, Ven. Jigme remains in good spirits as she does retreat propped up in bed with her arm in a sling and bandages on her shoulder. She had planned to do the three-month Vajrasattva retreat without distraction until her rotator cuff tore. She is healing well from her surgery in early February, during which her sister Doris came from Colorado to help care for her for a week, and then the Abbey community took over.

Photos of the three-month retreatants are here. 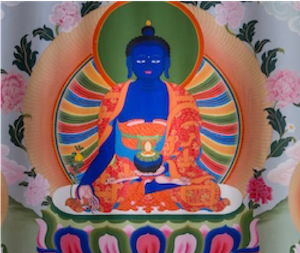 The Abbey received a call from someone we didn’t know asking for help. A relative had died suddenly in a nearby city, and the mother would be flying in the next day. Could some of the nuns meet her to do prayers and chanting over the body to help steer their dear one to a good rebirth?

Generally, we don’t leave the Abbey during retreat except for health concerns, but this was important to do. Vens. Tarpa, Chonyi, and Jampa met the family at the funeral home, and were very glad they did. Ven. Jampa said, “These couple of hours were some of the most valuable hours of practicing compassion, prayer, and concentration I have had in my life.”

The nuns spent about two hours with the grieving mother and the body, sharing Medicine Buddha practice and various other mantras and prayers, including the King of Prayers. Their main task was to embody the qualities of compassion and wisdom as they listened, supported, loved, and helped to ease suffering as best they could.

Although not Buddhist, the family was receptive, grateful, and clearly healed by the nuns’ sharing. Ven. Tarpa noted, “Medicine Buddha is such a healing presence, you could really feel how that was the best medicine in this time.”

In times like this one, when there is strong emotional pain, we are especially grateful to have met the Dharma ourselves. There are so many levels to how the Buddha’s teachings bring peace in a chaotic world. 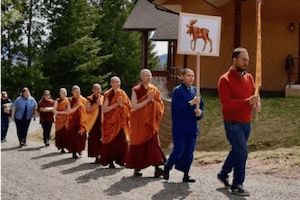 The Abbey’s monastic retreat (varsa) and our parallel winter Vajrasattva retreat end in March. To celebrate both, we invite you to join us on Sunday, March 24, for two joyful annual ceremonies: Kathina and the end-of-retreat Lama Chopa Puja. It’s our first public event of 2019.

The day begins at 10 am with the Kathina ceremony. Practiced since the Buddha’s time, Kathina is an opportunity for the lay and monastic communities to connect and celebrate our interdependent relationship. You can read about it here.

After the Kathina ceremony, we’ll break for a potluck lunch (always delicious!), then continue with a joyful Lama Chopa puja—done partly in English and partly in Tibetan—to make offerings to all the Buddhas and bodhisattvas in gratitude for our retreat. We conclude with special recognition of the volunteers who keep the Abbey going all year, but especially during this winter retreat time. 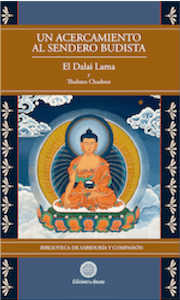 The first volume of the Library of Wisdom and Compassion entitled Approaching the Buddhist Path has been published in Spanish! Ven. Nyima gives an introduction (in Spanish) to the book—watch it here. Get the book here.

In addition, our web team has posted the videos and Spanish transcripts of short videos that Ven. Chodron recorded in English for the Dharma Latino Youtube Channel last year. Enjoy the teachings in Spanish here. The videos with English transcripts are also available here.

We’re delighted that ten more Tibetan Buddhist nuns have received their geshe degree this year, bringing a total of 36 over the last three years. Read about it in the Northwest Dharma News here. (Photo courtesy of the Tibetan Nuns Project.) 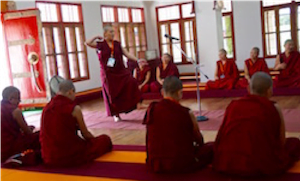 One of the nuns who became a geshe this year was Ven. Dawa Chozom. A friend of Ven. Chodron’s for over 25 years, she visited the Abbey one summer five years ago. She has 80% hearing loss, and one of the Abbey’s friends made sure she got the latest in hearing aids. Another Abbey friend helped her learn to use them. She had her heart set on earning the geshe degree and despite a big hindrance like this, she did it!

The nuns from Gebchak Nunnery in Tibet were asked “What do you do when you have problems, get tired or discouraged, feel down etc.” Watch some of their replies.

Ven. Chodron gave a webinar for Jewel Heart Center on the far-reaching practice of concentration. Watch the recording here. She’s also made new, better quality audio recordings of some of the guided meditations on her website. Check out the meditations on kindness, gratitude, and love here, and others in the Deity Meditation section here.

Dharma Drum Mountain Monastery in Taiwan interviewed Ven. Chodron again last year for a column on “care for contemporary society” in their monthly Humanity Magazine. They discussed how to bring a Buddhist perspective to contemporary social issues. Read the interview in English here. The Chinese version is here.

We received a letter from an incarcerated man describing how the Dharma teachings helped free him from his own personal Special Housing Unit. SHU is polite for “The Hole” Read his letter here.