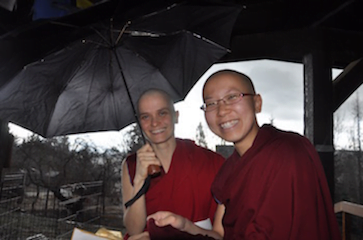 Spring is definitely here with its snow/rain one day and glorious sunshine the next. We welcome all the weather—even the storms—especially since last year there was drought that resulted in the horrendous forest fires in the state. 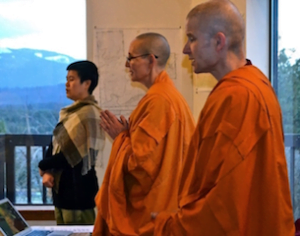 Writing the enews for the last month of winter retreat is either the easiest or the most difficult, depending on how you look at it. Why? Because externally each day looks like the previous one, while internally the mind goes here and there—from the past to the future, sometimes staying in the illusory present. It goes from the suffering of the hell realms to the joy of Sukhavati, Amitabha Buddha’s pure land.

Each day begins with meditation, then breakfast, followed by more meditation, then lunch (and lunch dishes, of course). Since everyone wanted more time for Dharma study this year, the afternoon is devoted to that, then medicine meal and meditation. Twice a week, we have chanting before evening meditation; once a month there is Tara Puja, and twice a month Lama Chopa. Also twice a month is posadha, our confession and restoration of precepts ceremony. But there are no guests, so we can focus on our practice, and only when the weather permits, is any outdoor work done.

We had a ripple of excitement when Venerables Jampa and Damcho headed off to Taiwan to begin 7 weeks of monastic training for their bhikshuni ordinations. They’ll return at the end of April. We sent them off with care, confidence, and good advice, then resumed our retreat routine. Their send off photos are here.

What else to tell you? The deer are fine; they come to visit us every evening. The turkeys are also well; they can sense spring coming and so are beginning to rev up for the strutting and squawking that accompanies mating season. Maitri, Karuna, and Mudhita have made friends with the new kitty, Upekka, and Sonam continues to live in the barn. With the melting of the snow, the grouse have moved on; the blue jays, robber jays, nuthatches, and chickadees are here, and yesterday I heard the first woodpecker tapping away.

The snow bells have been out for a couple of weeks, and some crocuses and a Siberian iris are blooming. Daffodils and irises are beginning to grow too; we wish for tulips but it seems the voles have snacked on the bulbs.

The day after I wrote the above, we received a call from a friend who is the president of the Spokane Interfaith Council. Bernie Sanders was coming to Spokane the next day and wanted to meet privately with the interfaith council and religious representatives. We were invited. So we put on our best robes (we have two sets, so this means the clean one) and off we—Venerable Chonyi and I—went.

The senator was running late so the interfaith meeting was very short, maybe ten minutes, with questions and a photo afterwards. He spoke about medical care, education, poverty, and discrimination of all kinds as moral issues. Even though they get politicized, these issues are actually moral concerns; isn’t it imperative as ethical human beings that we care for each other? He said that a society is not judged by its wealth but how it cares for its most vulnerable people.

We were most struck by the incredible enthusiasm people—especially young people—have for his campaign. They nearly vibrated with excitement and have such a sense of hope in the possibility of making things better in the world. We were heartened by the young people’s participation and their wish to bring kindness, compassion, and inclusion into the public discourse.

We pray their enthusiasm and effort will continue, regardless of the outcomes of the primary and the general elections. We need a sustained effort and commitment to living, practicing, and promoting the values that serve and care for the people of our country and our world.

Buddhism One Teacher, Many Traditions at Maitripa

Maitripa College in Portland, OR invited Venerable Chodron and Bhante Seelawimala, a Theravadin monk who is the founder of the American Buddhist Seminary in Sacramento, to do a weekend seminar based on the book Venerable Chodron co-authored with HH the Dalai Lama, Buddhism: One Teacher, Many Traditions.

Intra-Buddhist dialogues like this one enable us to see the similarities and differences in the various Buddhist traditions and thus the Buddha’s skill in presenting the Dharma in different ways according to the dispositions and interests of diverse people.

Venerable Chodron reports, “We discussed the four truths of the aryas, rebirth and karma, the eightfold noble path, the perfections, and selflessness in very practical terms so that people could put the teachings into practice easily. The discussion the last morning was especially interesting as we answered questions about practice and about the future of Dharma in the West.”

Maitripa’s Leigh Miller writes, “We were so fortunate to receive these teachings! Many people found it very valuable, interesting, and beneficial.”

Conclusion of the Retreat

The cherished time of quiet retreat is coming to an end, and we began to speak again as part of the transition of retreat. For a change of activity, all of us went to Tara’s Refuge and began to clean up the dead organic debris and fallen trees that litter the land around the creek and pond. These community building activities are a lot of fun, and at the end of the afternoon we looked around and could see the progress. There remains a lot more to do, but that means more fun working together.

An anonymous donor has offered lunch to all the retreatants at a local restaurant to celebrate the conclusion of a successful retreat. And we are preparing for the first post-retreat Sharing the Dharma Day this Sunday, April 3, and hope that many of you will join us then. In the afternoon we’ll do the Lama Tsongkhapa practice and thank all the volunteers whose kindness enabled us to do retreat.

Immediately after the puja, I depart for a five-week teaching tour to Michigan, Spain, Germany, Denmark, and Russia. The rest of the community will finish planning work projects and travel schedules for the year and then get busy enacting them. The silent peacefulness of retreat will remain inside of all of us, ready to be tapped into in the break times as we now enter the time of the year for sharing the Dharma and sharing the Abbey with all.

End of retreat photos are here.

A Song to Mummy Tara

The Friends of Sravasti Abbey Russia have steadily built a warm connection with the Abbey and will host Venerable Chodron’s teachings in the Moscow area next month.

Venerable Tenpa, a mainspring of the Russian group, recently wrote that many people in Russia are troubled “about the general ill-being in the world of suffering.” He asked Venerable Chodron to compose a prayer “towards the goals of world peace, interfaith harmony, gender equality, establishment of true ethical values, and genuine compassion and wisdom in the minds of all.”

Venerable Chodron said that, at first, she wasn’t sure she could write something that would help. “But when I read Venerable Tenpa’s message,” she said, “it sounded exactly like how people in the US are feeling, so I decided to give it a try.” The result is a “Song to Mummy Tara in These Dire Times.” Venerable Chodron explains, “One of my teachers, Lama Yeshe, used to refer to ‘Mummy Tara,’ so I address her that way.”

Traci Thrasher has set the prayer in a graphic design which you can download  in English here or in Russian here.

“From our side,” Venerable Tenpa promised, “we will diligently recite the prayer and try to embody it!” You are welcome to join him, and dedicate the merit towards wisdom and compassion in all governments and harmony among all people.

Our 2015 annual report is out in hard copy and PDF. Venerable Chodron’s annual message begins:

“In 2015, the Abbey’s slogan seemed to take on a greater meaning and urgency than we could foresee when it was coined in 2003.

“The Abbey responded to reports of mass shootings, suffering refugees, terrorism, and more by sharing the Dharma—compassion, tolerance, fortitude, and wisdom—in our daily YouTube talks, during courses and retreats at the Abbey, in our nearby towns, and in places around the world. People are thirsty for the Buddha’s teachings and we are glad to help.

“Meanwhile, Sravasti Abbey had much cause for rejoicing in 2015, and we celebrated kindness—including yours—in many ways.”

Note that, to protect our donors’ privacy, we post an abridged version on the web that doesn’t include names of benefactors. If you would like the complete report, write the Office.

Sravasti Abbey Friends Education (SAFE) is a distance learning program that guides students progressively in their Dharma studies. The facilitated online course includes weekly readings and writing, weekly contact with the course facilitator, and audio and video teachings. One student said, “SAFE has been like the rock of my spiritual development. I especially appreciate the strong emphasis between the theory and the practice.” Check it out here, or just write the SAFE Coordinator to sign up. New 12-week session begins May 2.

Ken wrote a piece on the Navy’s KISS policy—Keep It Simple, Stupid—and its relationship to Dharma practice.

Tanya wrote about her continuing investigation regarding rebirth: does she believe it or not?

Al’s poem, “A Big Piece,” written in prison, is a thoughtful take on the near-universal “Why me?” mindset and how to change it.

The German translation of Preparing for Ordination is now online!