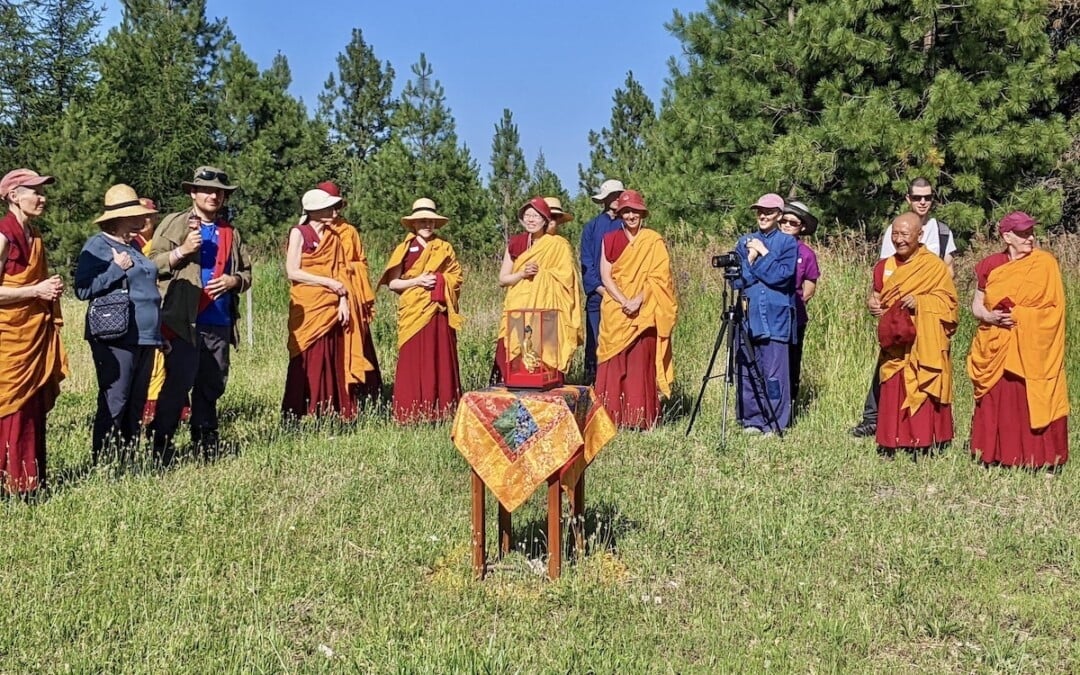 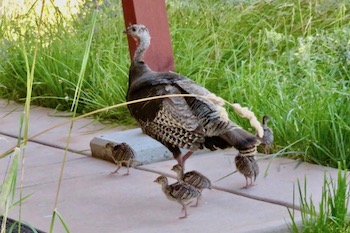 What’s new at Sravasti Abbey? Just ask the ravens who are cawing loudly every day. Ask the young doe and her two babies. Ask the twelve chicks of the mother turkey. They all say, “It’s hot, many guests are here attending retreats and courses, and construction of the Buddha Hall has begun!” 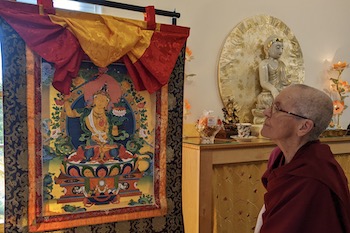 Twelve guests joined the growing Abbey community to spend a week “on vacation” with Manjushri, the Buddha of Wisdom.

Ven. Samten has put the “Homage to Manjushri” to an inspiring melody that we chanted before each teaching session. Ven. Chodron taught the Manjushri practice using transcripts from Lama Yeshe’s teachings on this magnificent Buddha.

In the afternoon, she explained the three types of compassion, based on Chandrakirti’s “Homage to Great Compassion” that comes at the beginning of his Supplement to the Middle Way. There were three or four meditation sessions daily and discussion groups every other day.

At the end, everyone felt inspired, and several people commented that they understand much better how compassion and wisdom work together on the path to full awakening.

Teachings on the Manjushri practice will be on YouTube soon. You can watch the Chandrakirti teachings on the Gompa Tibetan Monastery Services’ Facebook channel. Check it out here. 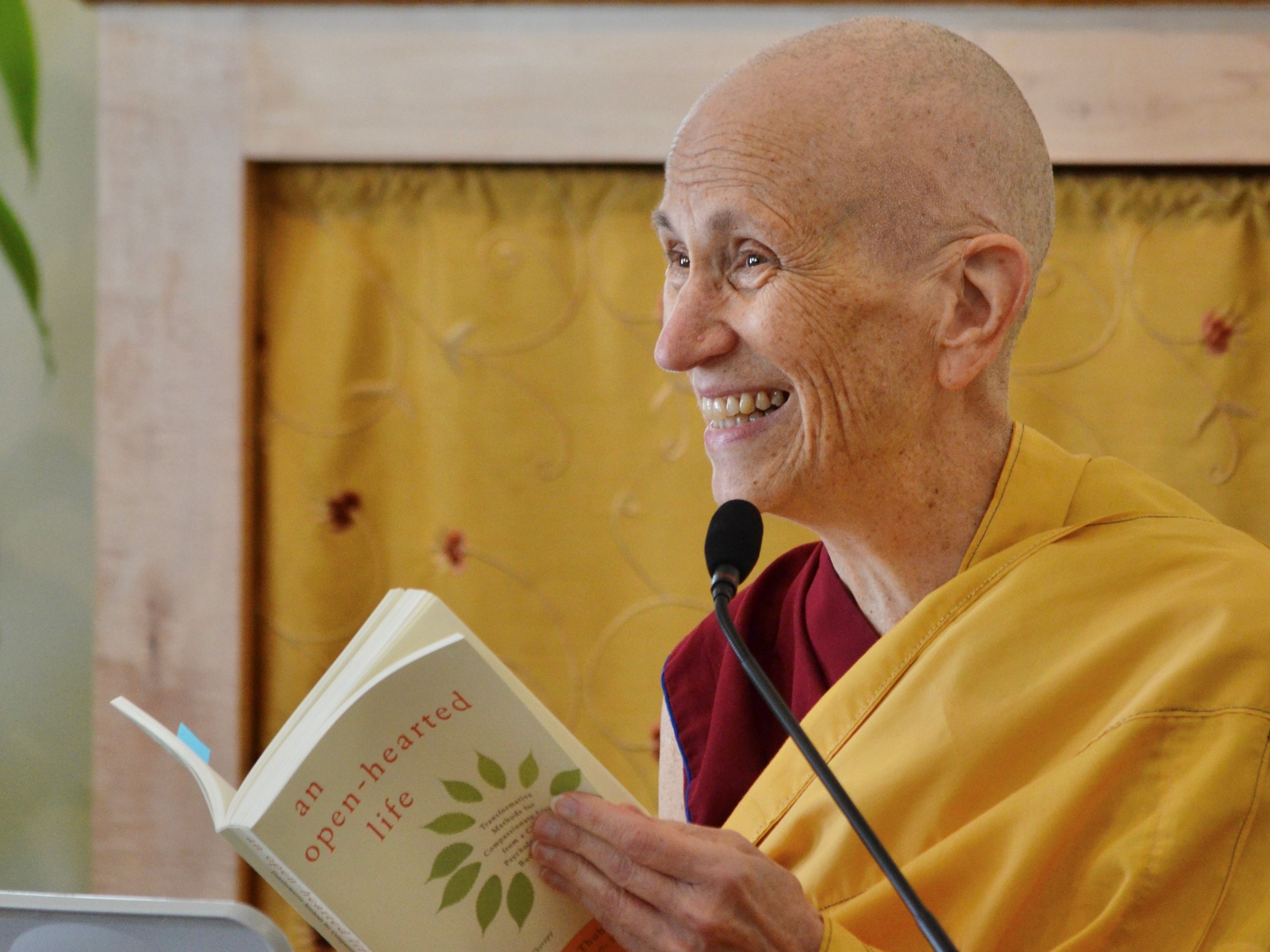 This month’s topics, from An Open-Hearted Life, were “Survival of the Most Cooperative” and “Compassion and Attachment Relationships.” They were both captivating subjects. Watch the guided meditation by Ven. Sangye Khadro here.

We had good discussions about these topics over a delicious potluck lunch. 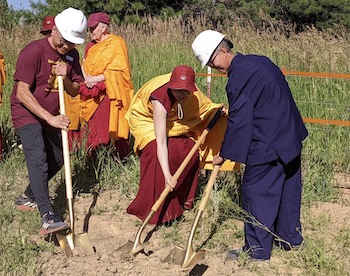 After the morning Sharing the Dharma Day program, we re-assembled in the dining room for the Ground Breaking Ceremony. About 40 people gathered to recite prayers and mantra and learn about the Buddha Hall project.

We also unveiled the beautiful Manjushri painting for the main altar. Commissioned from a traditional thangka painter, it had been hand-carried from India in time for the ceremony. Watch the updated video about the making of the thangka here.

Next, we adjourned to the building site to bless the land and dedicate prayers for the project to benefit everyone involved: the local beings who inhabit the land, the construction workers, all benefactors, the sangha now and in the future, and all sentient beings.

Stephen, a former architect, had borrowed some golden shovels for the occasion. Everyone took a chance to turn the earth—symbolically or literally—to formally launch the next phase of this beautiful project. We also blessed the building site of Metta Cabin, a new home for Venerable Sangye Khadro that will be built at the same time as the Buddha Hall.

Watch the joyful Ground Breaking Ceremony highlights here. Or you can read about it and see photos here. 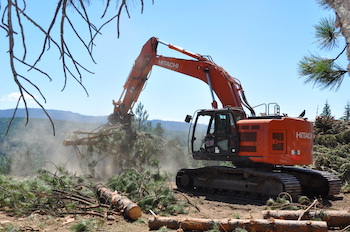 We were delighted to see a huge excavator come up the hill to the Abbey on Monday morning, July 25. Its first step was to clear the building site and surrounding area where the septic system and infrastructure items will be placed.

Standing a distance away, we stared in awe at these huge, strong trees being taken down, including their roots. See the video here.

Suddenly we could directly see parts of the upper meadow from the lower meadow, which was previously veiled by trees, and envision a beautiful Buddha Hall there in their place.

And with the space in the meadow revealed, we can now imagine a 17,000 sq. ft. Buddha Hall there with golden ganjira—traditional Tibetan roof ornaments—shining in the sunlight and moonlight.

Peter, the talented sculptor, showed us the two side statues (7 ft. in height) of Ananda and Mahaprajapati that will flank the 10.5 ft. statue of the Buddha on the main altar. Their faces seem alive, even though they aren’t finished yet. Read about them and see photos here.

Now that construction is underway, we hope to be able to continue building until the finishing touches are in place, but doing so depends on adequate funding.

Inspired by the Buddha Hall vision, two Abbey donors offered $300,000 and challenged supporters to match their gift. Then, as soon as we announced their Ground Breaking Challenge, another donor stepped in to make it $500,000! What a beautiful gathering of virtue! Ven. Chodron explains how Kindness Will Meet the Challenge here.

You can read about the $500,000 Ground Breaking Challenge here, and see the many different ways people can be involved to help bring this temple to life. You can make an offering or monthly pledge here. 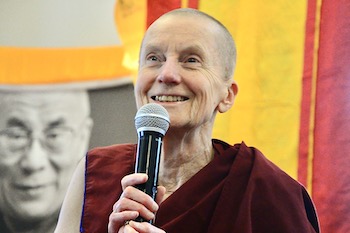 Ven. Sangye Khadro completed the three-month online course on “Seventy Topics,” requested by Thubten Norbu Ling Center in Santa Fe. This explains the bodhisattva’s path to awakening in greater detail than is found in the Lamrim.

The teachings included looking at bodhisattvas’ excellent qualities and how their minds transform into the omniscient mind of a buddha and attain the four buddha bodies. Watch the series here.

Ven. Sangye Khadro also teaches a weekly in-house tenets class that is now discussing the Svātantrika-Madhyamaka philosophical school and will soon take up the tenets of the Prāsaṅgika-Madhyamaka school. In her monthly online talk to the Sandpoint Sangha, she is teaching Langri Tangpa’s mind training text, “The Eight Verses of Thought Transformation.”

The weekly Zoom class, led by several of the Abbey nuns, continues reading and discussing An Open-Hearted Life by Russell Kolts and Thubten Chodron. In the class discussion, people apply the teachings to their lives and share their successes and efforts to reduce their anger and judgment of others and to cultivate compassion. This class has been going on for many years, although we don’t always mention it in the eNews.

Following in the Buddha’s Footsteps

Ven. Chodron continued a series of monthly teachings requested by Vajrayana Institute in Australia on her book, Following in the Buddha’s Footsteps, co-authored with the Dalai Lama. June’s teaching focused on “Refuge in the Three Jewels,” and the class explored the Dharma Jewel as the real spiritual refuge. This is because true paths and true cessations, when actualized, protect our minds from the duḥkha of cyclic existence. Having looked at the Three Jewels of Refuge from the viewpoints of the Pāli tradition and the general Mahāyāna tradition, the July teaching, “Three Jewels in the Vajra Vehicle,” began to look at the Three Jewels from the perspective of Tantra. The next class is August 20. 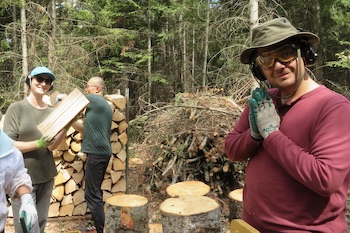 A great crew of kind volunteers came to help the Abbey community this month. Many people worked in the forest—bucking up wood from trees that had been taken down last year, felling dead trees, and limbing and removing debris—all work that is valuable for fire mitigation. Other volunteers tended the veggie and flower gardens.

About ten days before this, we had just finished removing large piles of debris from the forest with the intention to burn it in the upcoming days. Then, at 6pm that day, the county sent out a notice that a burn ban would go into effect at 12:01am the next day. That gave us 6 hours to burn the debris or leave it as a fire waiting to happen until the fall when temps cool down.

The ol’ team spirit at the Abbey jumped up, and we organized two teams to burn the debris. Some people stayed up well past midnight to watch over the embers. It’s a pity we didn’t have graham crackers, chocolate, and marshmallows around or we could have handed out s’mores. 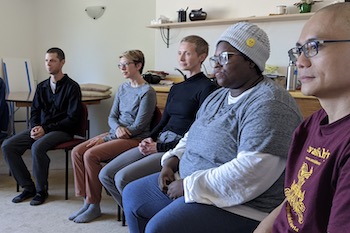 Ten guests, as well as the Abbey’s 8-precept-holder anagarikas and six siksamanas, are attending our yearly Exploring Monastic Life program. This two-and-a-half week program enables guests to learn about and experience monastic life with the Abbey community. We share teachings, discussion groups, meditation sessions, and offering service together.

This year it overlaps with construction of the Buddha Hall, which brings in new elements as we experience firsthand what it means to bring the Buddha’s teachings to the West, both in terms of our physical environment (dust, noise, and excessive heat warnings) and inner development (joy and excitement that construction has begun, as well as trying to maintain concentration in our meditation as we recite the list of things to take care of like a mantra). 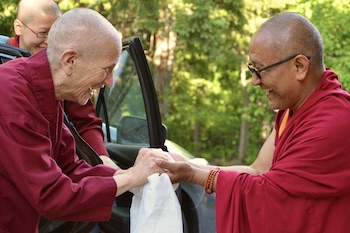 The Abbey enjoyed many guest visits this month, some for days, others for weeks. Among them were Geshe Dadul Namgyal from Drepung Loseling Monastery and the Emory-Tibet Science Initiative in Atlanta, who delighted the community by joining us in our daily schedule. We learned so much in the informal exchanges and Dharma discussions we had with him.

Geshe-la gave a few Bodhisattva’s Breakfast Corner (BBC) talks while he was here, including this tribute for His Holiness the Dalai Lama’s birthday.

Tan Nisabho, a Theravadin monk, also joined us for four days. Tan Nisabho, who’s been coming to the Abbey since he was 16 (he’s now in his 30s), just started Clear Mountain Monastery near Seattle. He too joined in our daily schedule, giving us the opportunity to learn about the Theravada tradition. He also gave a BBC talk. Watch it here.

We appreciate very much our friendships with monastics from other Buddhist traditions. 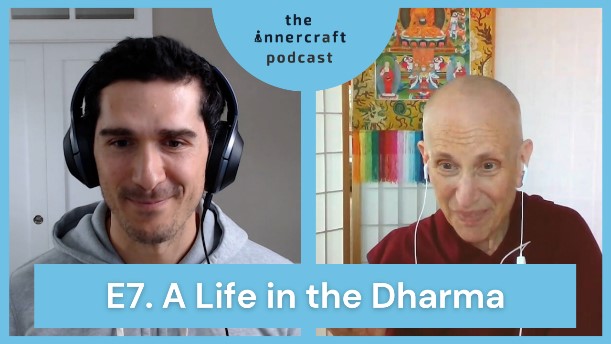 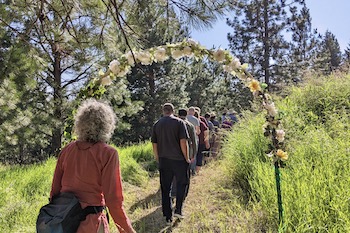 Here’s what’s happening in the next few weeks:

Check the Abbey Events page for much more.