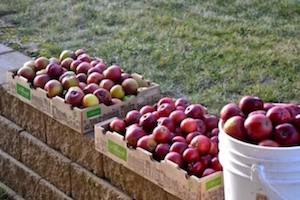 After a very rainy and cold October, we had a beautiful Indian summer in November. And now the first snow has come.

We marveled at the views that opened up at Tara’s Refuge once the old barn and carport were torn down. We were also amazed by the approximately 750 lbs. of apples the trees there bequeathed us.

Another event that stunned us and the world was Trump’s election as president. In response to the many emails from upset and frightened people, Ven. Chodron gave a series of Bodhisattva Breakfast Corner talks emphasizing the need for empathy, dialogue, and compassion. They are here, here, here, here, and here. Also, here are some applicable meditations: Working with Prejudice and Working with Disturbing Emotions.

Ken shared how he is processing the election here.

Buddhism: One Teacher, Many Traditions

About 30 people attended the second installment of teachings on the book Ven. Chodron co-authored with His Holiness the Dalai Lama, Buddhism: One Teacher, Many Traditions.
After a review of last year’s teachings, we dove into the chapters about the higher training in wisdom, emptiness and selflessness, dependent arising, and uniting serenity and insight.
Weaving compassion and bodhicitta in with wisdom, Ven. Chodron challenged us to get a feeling for emptiness and dependent arising, not simply to recite the words. We also had some lively discussions on our perfectionistic tendencies and how to bring acceptance and rejoicing to our actions rather than self-criticism for not meeting our own unrealistic expectations.

The third installment of the live course will be offered next autumn at the Abbey.

About 45 people were at Sharing the Dharma Day in November. It was a smaller group than usual, probably due to the pouring rain earlier that morning.
The talk was on using mind training teachings to transform adverse conditions into the path. We discussed how to practice when our possessions are stolen, when we are criticized in front of a group of people, and when our reputation is ruined or people talk behind our back. From the viewpoint of bodhisattvas, all these are wonderful opportunities to overcome the self-centered attitude, which is an enemy that destroys our happiness.

The discussion group in the afternoon was lively as people shared examples of adversities and how they can apply the Dharma to them.

The next Sharing the Dharma Days is Sunday, December 4.

Gary Payton, who was an official climate activist observer at the Paris Climate Change Conference in 2015, came to give a presentation on the talks and what comes next.
All of us are very interested in protecting this planet—our home and the home of many sentient beings. We were enthusiastic to hear Gary speak and to learn that the Paris agreement officially went into effect on November 4. Here is a brief synopsis of what is happening.

Ven. Jampa shares a report on climate change and the Abbey’s approach to environmental issues in this article, which she also gave as a Bodhisattva Breakfast Corner talk.

You may also want to join us as part of the global interfaith community in showing our support for all nations to take practical steps to preserve our home.

Ven. Chodron, with Ven. Damcho assisting her, was planning to go to Asia the end of November, but an announcement came into her inbox saying that the Chinese Buddhist Bhikkhuni Association had chosen her as one of the awardees of the Global Award for Bhikkhunis of Outstanding Contributions.
The award was given to 50 bhikkhunis from Taiwan, China, Cambodia, Malaysia, Thailand, Singapore, Sri Lanka, USA, Great Britain, Austria, and Korea.
To attend the award ceremony and the pilgrimage to various Chinese monasteries that came with it, Ven. Chodron had to depart for Asia two weeks earlier than planned. “While I haven’t done anything special,” she said, “I’m delighted to see bhiksunis’ contributions to spreading the Dharma and benefiting sentient beings acknowledged.”

The three-hour award ceremony was held on a Saturday evening at a stadium in Kaohsiung with about 15,000 people in attendance. The program included speeches by various dignitaries and some of the awardees as well as entertainment. Lay followers said they were deeply touched to see so many bhiksunis together and to know of their talents and contributions. (Watch Ven. Chodron’s acceptance speech.)

From the side of the Western nuns, they, too, were deeply moved to be in a Buddhist country that values female monastics. The speech of a 90-year-old bhikshu, President of the World Chinese Buddhist Sangha Congress, Venerable Master Ching Liang, especially touched them. Saying that the number of bhikshunis in Taiwan is twice the number of bhikshus, he praised the nuns’ study, practice, and outreach for the flourishing of Buddhism in Taiwan today.

In conjunction with the awards ceremony, the hosts organized a temple pilgrimage, which illustrated some of the bhiksunis’ achievements. The Ching Liang Mountain Temple and the Dih Yuen Temple—both headed by bhikshuni abbesses—were huge complexes with outstanding bas reliefs of scenes from the Mahayana sutras, statues of the 500 arhats, and calligraphy of sutra passages. The groups also visited Fo Guang Shan and Wanfa Pingtung Temple. There, on the final day of the pilgrimage, 100 nuns established the World Bhikkhuni Association.

Photos are here. You can also see the video of Ven. Chodron’s life made for the presentation and see Taiwanese press coverage with translation.

From the Global Bhikkhuni Award Ceremony, the nuns  departed for Manjusri Vihara, founded by Ven. Mingjia, a long-time friend of Ven. Chodron.
Ven. Chodron spoke on the three principal aspects of the path there, and then walked around the vihara’s land while Ven. Mingjia described her plans to build a new temple. The two abbesses also discussed the difficulties of construction projects, a necessary step to spread the Buddha’s teachings in the world by establishing the sangha and creating a place for lay practitioners to learn and practice as well.

Ven. Wu Yin has given Ven. Chodron valuable advice for establishing Sravasti Abbey and training new monastics and will come to the Abbey in January 2018 to give a two-week Vinaya course. During this visit, she also gave generously of her time in giving suggestions and sharing experiences of heading a monastery.
Vens. Chodron and Damcho continued north, staying three days at Pu Yi Temple, a nunnery built into the side of a mountain with a beautiful view. The Abbesses there, Ven. Zhao Yin and Ven. Zhao Hui, were also generous with their time, giving them a tour of the nunnery—including the nuns’ quarters, where they chatted and laughed with the nuns, and a huge dormitory where 120 lay women stayed during retreats—and the new translation institute they wish to establish. Ven. Chodron gave a talk to the nuns and lay people there on equalizing and exchanging self and others. They also visited with Ven. Heng-Ching, another long-time friend.

They also visited Dharma Drum College of Liberal Arts, where Ven. Chodron gave a talk on the history of bhikshuni ordination in Asia and its present situation in the West. The audience consisted mostly of monastics with some professors and lay practitioners who all have keen interest in the experience of contemporary bhikshunis. They had a lively discussion and Q & A session.

After this wonderful and inspiring trip to Taiwan, the venerables headed to Singapore, where about 20 people met them at the airport. Ven. Chodron will be teaching in Singapore for the upcoming days, and then will go to Malaysia and India.

The Abbey’s new website is up and running.
Ven. Chonyi, who is the head of the website team, led the Abbey community and volunteers from afar in a consecration of the new website. We chanted om mani padme hum as we scrolled through each page and dedicated so that the Dharma will be sustained and all sentient beings will benefit from the new website.

Traci, one of the volunteers from afar, wrote us afterwards, “The web consecration was so incredibly beautiful. You can’t possibly imagine what a beautiful gift it is to those of us who are not there to be able to see and participate in something like that. It feels like I’ve been in the desert without water, on the verge of dying and somebody gave me a huge glass of the most delicious nectar I’ve ever tasted. All of you can never, ever know how powerful what you do for others is.”

Ven. Chodron was interviewed by Sr. Maureen Fiedler on interfaithradio.org. You can listen or download the interview, entitled “Nuns Now: Crimson Robes and the Pursuit of Compassion.”
A student wrote, “Question: How can we transform adversity into joy and courage, so that we don’t get overwhelmed by situations and become unhappy?” Read Ven. Chodron’s advice.

The Abbey community shared a Thanksgiving meal with everyone pitching in to help create it. See photos of why we are thankful for community life. Our local newspaper, the Spokesman Review, included the Abbey in its Thanksgiving Day story about gratitude.

Ven. Thubten Tenzin from Moscow, a leader in Friends of Sravasti Abbey-Russia, is visiting for a few months. Ven. Thien, a nun from the Vietnamese tradition, is still with us too. It’s wonderful to have sangha guests stay for a while. Christina and Alex are also visiting for several months and settling right into community life.

Holiday shopping can actually bring support to the Abbey if you do it through the Amazon Smile program.  Amazon will donate 0.5% of your purchases to support the Abbey when you sign up for the program and name the Abbey as your preferred charity. Check it out on their About page.