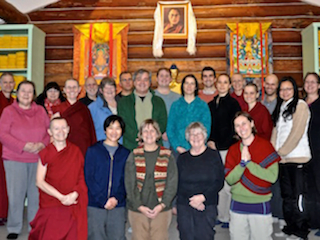 Unlike last winter, we’ve gotten a reasonable amount of snow this year, and you can almost hear the trees in the forest singing every time the snow or rain falls.

The animals are happy this winter too: looking out my window I see the grouse snacking on the willow tree and the blue jays carousing for scraps of bread. An occasional magpie makes an appearance too, and a robber jay just stopped by to see what’s happening. Meanwhile the chickadees and nuthatches are perched on the bird feeder, munching.

Most hilarious is the after lunch parade of thirty turkeys following Ven. Jampa or Ven. Losang down the hill where they receive cracked corn at Tara’s refuge. I think these monastics are creating the cause to have a very cooperative group of disciples in a future life when these turkeys are born as humans. You can see Abbey Life photos (but, unfortunately, no turkey parade pics). 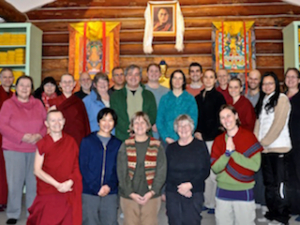 We welcomed 2016 with Vajrasattva’s mantra and purification practices. Twenty-four people gathered from New Year’s eve through the weekend to purify past negativities, generate merit, and commit to a life of peace and non-harmfulness.

Venerable Tarpa led a thorough introduction to the Vajrasattva practice, and Venerable Chonyi’s talk the next day showed how dependent arising is the key to purification. All the residents pitched in to guide meditations, lead discussions, and serve the meals, and the guests joined in with their heartfelt practice and good energy for snow shoveling.

In the closing go-around, several people recalled how they had spent New Year’s Eve in previous years. They were grateful to purify those past actions and resolved to make different choices—marked by an appreciation of virtue— in the future. You can read Kathy’s Vajrasattva “rap song” about the retreat.

Several long-time Abbey friends attended this retreat, and many others came for the first time. All promised to return again to deepen their connection with the Dharma. Photos are here.

His Holiness the Dalai Lama’s Teachings in India 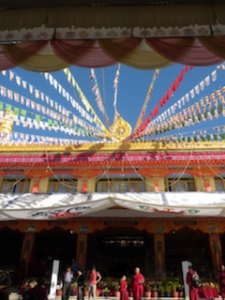 Venerables Chodron and Damcho arrived in the Tibetan settlement of Bylakuppe in India on December 17 with great anticipation for the fourth installment of the Jangchup Lamrim teachings, in which His Holiness the Dalai Lama has been giving the oral transmission and commentary on eighteen great lamrim treatises. The teachings were held at the newly constructed prayer hall of Tashi Lhunpo Monastery, which was inaugurated on December 19. Unfortunately the nuns missed the inaugurations thanks to a pre-teaching purification of the digestive tract!

Nevertheless, they made a quick recovery and gladly continued with teachings on Pabongka Rinpoche’s Liberation in the Palm of Your Hand, and Zhamar Pandita’s Treatise on the Stages of the Path to Enlightenment and his Treatise on Special Insight. The latter text is stunning and many lamented the lack of an English translation of the written text. May this text soon be translated into English for the benefit of all beings!

The lamrim teachings concluded in ten days with His Holiness offering refuge and the five precepts to the lay audience and the bodhisattva vow to everyone who wished to receive it. The hall was beautifully decorated with flowers for the latter ceremony, which His Holiness clearly enjoyed giving.

On the two following days His Holiness conferred the empowerment of the Sixteen Drops of Kadam. Everyone delighted in the opportunity to usher in the New Year with a long life puja for His Holiness the Dalai Lama on January 1. Even more garlands of flowers decorated the inside and outside of the hall, and abundant beautiful offerings were made to him to request him to live long. As he reminded us, the best offering to make and the best reason for him to live long are our putting into practice the teachings he has given. 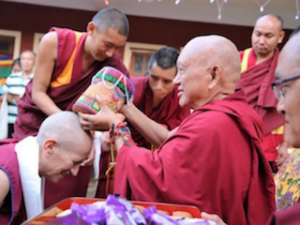 One highlight of attending teachings in India is the opportunity to connect with great masters and long-time Dharma practitioners. The nuns met with the incarnations of Venerable Chodron’s teachers, Ling Rinpoche, Tsenzhap Serkong Rinpoche, and Zong Rinpoche, and visited Kyabje Zopa Rinpoche.

The nuns enjoyed Dharma discussions with Geshe Yeshe Thabkhe, Khandro Rinpoche, Geshe Dadul Namgyal, and Geshe Ngawang Samten, many of whom accepted our invitation to teach at the Abbey in 2016. Venerable Chodron also met with many old friends—Tibetans and Westerners—who encouraged and inspired each other after decades of Dharma practice.

For the past year, Venerable Chodron has been an advisor to Reimagining Doeguling, a project spearheaded by Tibetan-American banker Tsewang Namgyal to bring about community-driven, sustainable development in Doeguling Tibetan Settlement, near Mundgod, India. At a benefit dinner to raise awareness about the project, Venerable Chodron spoke of her aspirations for Doeguling Tibetan Settlement to share its Dharma treasures and cultural heritage with the world as a way of repaying the kindness of those who have supported the Tibetans in exile. Many Tibetans stepped up at the dinner to offer monetary support, which was heartening. You can watch a video about Reimagining Doeguling here. 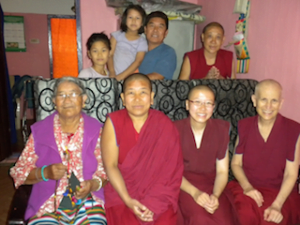 Both nuns were very well taken care of at the teachings thanks to the kindness of many friends, including the family of Venerable Dawa Chonzom—a Tibetan nun who has been friends with Venerable Chodron since 1996—who hosted them in their home. We are grateful to so many others who kindly provided the conditions for us to attend the teachings and who helped us while we were there. Now our job is to practice what we learned!!

Having 30,000 people together in close quarters for six hours a day means that if one person gets a cold, almost everyone else will as well. So as another purification, both nuns returned to Singapore nursing colds.

Venerable Damcho was invited to give a lunchtime talk at the Government Investment Corporation of Singapore on how she found her passion in life. She enjoyed the exchange with financial managers on living a meaningful life. She also had the unexpected opportunity to give the scheduled talk on “Developing a Giving Heart” at Pureland Marketing, because Venerable Chodron had completely lost her voice! Venerables Chodron and Damcho are now back at the Abbey, with their hearts full of the teachings and gratitude to everyone who helped them on this trip, especially all the friends of the Abbey in India and Singapore.

Photos from India are here, and more Singapore photos are here. 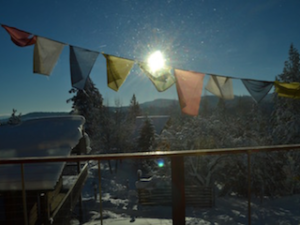 This month we focused on verse 31 of The Thirty-Seven Practices of Bodhisattvas:

If you don’t examine your errors
You may look like a practitioner but not act as one.
Therefore, always examining your own errors,
Rid yourself of them—
This is the practice of bodhisattvas.

Venerable Semkye’s talk struck a chord with the 40 people who gathered for Sharing the Dharma Day. She likened The Thirty-Seven Practices to a road map produced by the Three Jewels that helps us stay on the Dharma path. This verse advises us to be honest with ourselves and others, so as not to mislead anyone and go astray. In the afternoon discussion, we examined our experiences with pretense—putting up a front to cover up our perceived shortcomings—and the pain and confusion that comes from pretending to be something we’re not.

Skyler and two friends drove up from Moscow, where they attend the University of Idaho. He sent his appreciation for the day. Read it here. 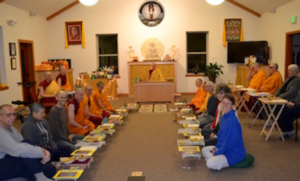 This year, our annual winter retreat focuses on taking refuge in the Three Jewels of the Buddha, Dharma, and Sangha and meditations on the stages of the path.

Ten guests have joined the community to do retreat here at the Abbey, while more than 275 are doing the Retreat from Afar by doing at least one session of the retreat each day at home. (We do five meditation sessions and one study session here at the Abbey).

We’ve posted photos of the retreatants from afar in the dining room and are amazed by the variety of people participating. People from Australia, Canada, Ireland, India, Italy, Mexico, Singapore, South Africa, Sweden, Russia, UK, Uruguay, and USA are doing the retreat, including 148 people who are incarcerated in the US. We appreciate all of their support and give them our encouragement as we all practice together.

We also appreciate the many holiday gifts that people have sent the community and the many gifts that continue to arrive from kind people wanting to make sure we are warm and well fed in the winter. May your merit ripen in full awakening (and everything good before that)! Photos are here. 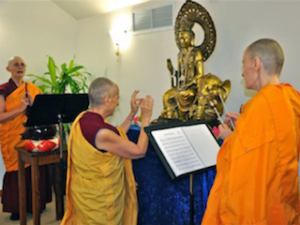 One of the three principal Vinaya practices that the Buddha prescribed for monastics is abiding in the “rains retreat,” named after the summer monsoon season in India. However, our summer months have little precipitation, so we do the retreat in the winter, making it a “snows retreat.”

The ceremonies we do for entering the retreat enhance our feeling of community and individually leave us feeling calm and centered. While part of the snows retreat overlaps with part of the Abbey’s winter retreat, they are not the same.

View photos of the beginning ceremony. 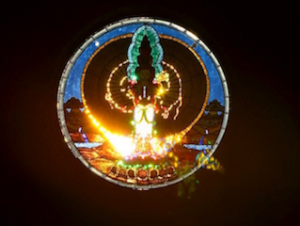 Venerable Jigme continues to heal after the surgery on her foot. She is staying in Chenrezig Hall, using the platform lift to go from the bottom floor up to the dining room where we’re having teachings (as well as meals) during the retreat. She’s offering free rides on the scooter she uses to get around as she cannot put any weight on her foot at all for two months. Her sister, Doris (who is a little bit like a sister to all of us), came for a week to help out with Venerable Jigme’s recovery and joined in the Vajrasattva retreat.

Recently there has been a lot of discussion on mindfulness and secular Buddhism. In Singapore, among a full program of teachings, Venerable Chodron gave two talks that touch on these topics that are particularly relevant for 21st century Buddhists: “Areligious Buddhism: Is there Such a Thing?” and “How to Be a 21st Century Buddhist.”

Hong Kong’s Joy of Living magazine published an article by Venerable Chodron, “Wisdom You Can Taste,” about bringing mindfulness to eating and how to use eating to create the causes for full awakening. Download an online edition here. Her story is on page 26.

Last month we mentioned Venerable Chodron’s talk with Bhanta Dhammaratana to launch Buddhism: One Teacher, Many Traditions in Singapore. Here’s the video of their teaching in which they share perspectives on the Four Immeasureables from the Pali and Sanskrit traditions.

Venerable Jigme tells how she used the Dharma to prepare for a surgical procedure and Mary Grace shares about applying to the Dharma when she was in a car accident.

Ramesh wrote a lovely piece about overcoming miserliness and connecting with others, and Ken tells us “Why I Support Sravasti Abbey.”

You’ve heard us discuss prison programs that help the men we work with. Here’s an example of one where incarcerated people train dogs.

Here’s a haiku from Al who is incarcerated in North Carolina:

Adherents of the Dharma
Let your practice bloom
As ten thousand Buddhas smile!