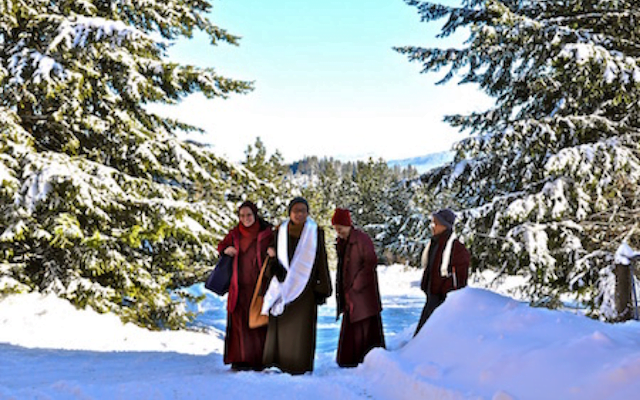 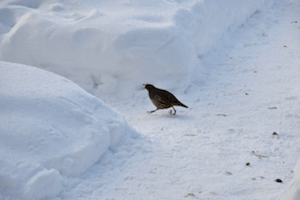 Quiet descends upon the snowy Abbey landscape as we shift into winter retreat. Turning our attention away from the distractions of the wider world, we focus on the contents of our own minds, practicing to retreat from the afflictions, immerse ourselves in Buddha’s teachings, and develop our good qualities.

Eager guests have arrived to join the first month of retreat, and many of you have signed up for the Retreat from Afar.

We appreciate everyone’s support as we train our minds to create peace in a chaotic world. By this merit, may all beings benefit.

Check out the photos of Winter Days. 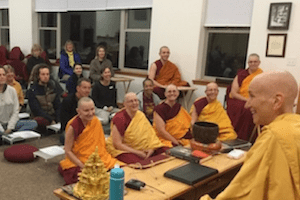 A record attendance for an Abbey retreat—54 people—came for the Vajrasattva retreat over the New Year’s weekend. The group was engaged and lively, and the energy of the mantra reverberated through the Meditation Hall when we chanted it together.

We enjoyed heartfelt discussions, and the provocative teachings challenged and inspired us to look at our actions honestly, recognize our potential clearly, and cultivate kindness and forgiveness for ourselves and others. Watch the talks here.

Our efforts were rewarded on New Year’s Day with a shower of pristine Vajrasattva snowflakes falling from the sky. In the evening, when the snowfall stopped, we got to work shoveling. Photos are here.

Lunch with the Sheriff 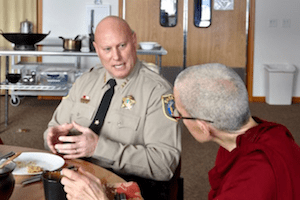 Law enforcement has been getting a bad rap in America lately, so we decided to invite our local sheriff and deputies to lunch and get to know them. And were we impressed!

The sheriff, assistant sheriff, sergeant, and captain came and we spent over two hours talking with them as they told us about law enforcement in our rural community—the high ethical standards they follow, the challenges they face, and their motivation to serve.

We really connected with them on the latter point, and I joked that we hope our service to living beings prevents people from ever encountering their services. They commended our involvement with Youth Emergency Servicesand said that they knew about the Abbey’s existence, but don’t always have the opportunity to meet with the helpful people. We asked the sheriff to give the BBC talk that day. Watch it here. Be prepared to laugh when he tells the story of wanting to pull someone over for speeding. 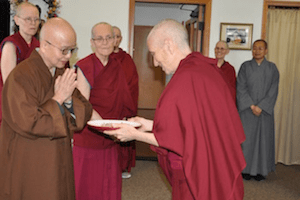 We were delighted that a long-time friend of Sravasti Abbey, Ven. Heng Ching from Taiwan, accepted our invitation to teach Vinaya for eight days at the Abbey. She was accompanied by another long-time friend, Ven. Tien Chang, who helped translate the ordination ceremonies we use at the Abbey into English.

Ven. Heng Ching’s teachings inspired and energized us as she made Vinaya practical in our daily lives. We had many open and forthcoming discussions during her classes that continued long after the class ended. The teachings strengthened our confidence in the way we’re doing things at the Abbey and gave us new ideas for areas that could use some improvement. We were sorry to see our Chinese sisters depart and hope they will come again soon!

Vinaya and Varsa photos are here 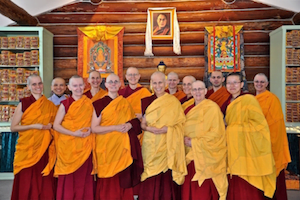 This year the Abbey is doing its fourth varsa—a three month retreat done by monastics since the Buddha’s time. Initially done during the summer rainy season in India, we have adapted it to be done in the winter, when the quiet and the snow is conducive to study, reflection, and practice.

This year fourteen monastics are doing this retreat (which is not the same as our winter retreat, although the two overlap for part of the time)—thirteen resident monastics (see below for news on Ven. Pende) and a monk visiting from Russia.

The ancient ceremonies we do to enter—and in three months conclude—the retreat are very inspiring. Doing them slowly and contemplating their meaning joins us to a 2,600-year-old tradition and centuries of people who have the same spiritual yearnings and aspirations as we do.

Ven. Chonyi describes the significance of varsa for the existence of the Buddhadharma in the world here. 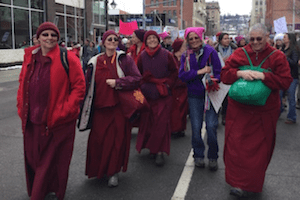 Many of the Abbey’s monastics, together with lay guests, attended the Women’s March in Spokane in order to express our respect for all people and our wish for equal rights and civil rights for all.

The organizers expected 2,000 people to attend the march but estimate that 8,000 came! The speeches were inspiring, especially from one woman in her 80s, and everyone was friendly, peaceful, and supportive of each other.

Anagarika Alicia gave her first Bodhisattva’s Breakfast Corner talk about Nagarjuna’s advice to the king about social policy in Precious Garland here. She was nervous but did beautifully and we all were impressed.

Over the last few years we have developed a relationship with the chaplain at a nearby county jail. Occasionally he calls and asks us to visit an inmate who wishes to speak to a Buddhist about spiritual questions. Recently, Ven. Tarpa met individually with two interested people there, one female and one male. Their sincere heartfelt questions and openness to learning were heartening. We find this to be typical with people we meet who are incarcerated. If they want to speak with us, it is because they are serious about making changes in their lives.

We encourage you to think about volunteering in your local correctional facility, where they offer programs that range from teaching meditation to knitting, yoga, chess clubs, reading and math classes, and more. The positive impact on others’ lives can be tremendous. 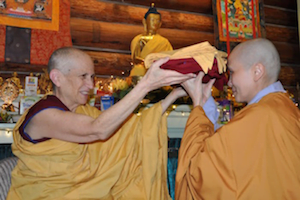 As is the tradition at Sravasti Abbey, we do a puja every Chinese New Year in honor of our Chinese supporters in Singapore, Taiwan, and the USA, as well as for all our supporters whose kindness enables the Abbey to exist. We dedicate the merit for your long life, good health, successful Dharma practice, good relationships, and freedom from hindrances. Together may all of us create peace in a chaotic world.

We also took the puja as the occasion for the former Ven. Tien to become Ven. Thubten Pende. In a short rite, she was given Tibetan robes as well as her new Tibetan name as we welcome her as part of the Sravasti Abbey monastic community. Ven. Pende received sramanera and siksamana ordination last June from a Vietnamese sangha.

Our two Singaporeans, Ven. Damcho and Hsiao Yin, made a traditional Chinese auspicious salad to celebrate the new year and taught us how to toss it. Everyone gathered around the table, lifting the different ingredients high in the air while expressing auspicious aspirations for the new year. We had a lot of fun doing this and enjoyed a delicious salad too! Ven. Damcho wishes everyone an auspicious Chinese New Year here/a>. New Year photos are here. 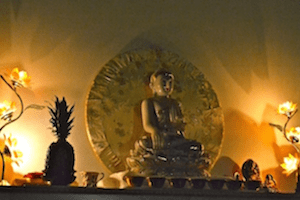 The guest retreatants are gathering at the Abbey now to join the residents in the annual winter retreat. They are excited and eager, studying hard and preparing well.

There will be twenty-seven of us here for the first month, in addition to all of you Retreatants from Afar who are joining us at home.

May everyone have a productive and enlightening retreat, filled with wisdom and compassion! 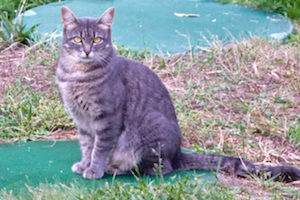 We want to share with you here the speech Venerable Master Jingliang gaveat the Bhikkhuni Award Ceremony in Taiwan. In it, he highly praises the contributions of Chinese bhiksunis in preserving and spreading the Dharma in Taiwan.

Al, an inmate from North Carolina, has shared his reflections on the allure of drugs hereand drug addiction here. He also expresses his expanded sense of sangha as support on the path. Read it here.

Christiaan shares some haiku he wrote at the Abbey during his 2013 visit here.

Rebecca arrived here from Australia to spend a year at the Abbey. She shares some of her initial impressions of Abbey life here.
Sonam, one of the Abbey’s kitties, is looking for a loving home. Can you help? Read this flyerto find out more about Sonam.

It’s not too late to sign up for Retreat from Afar, joining the Abbey’s winter retreat from wherever you are. And it’s not too soon sign up for the Sravasti Abbey Friends Education (SAFE) session that begins April 24.