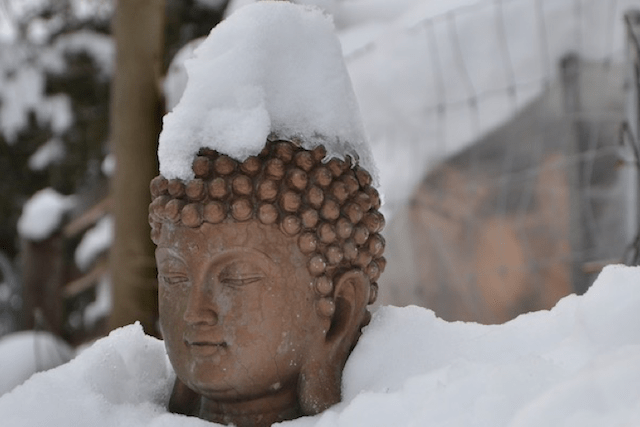 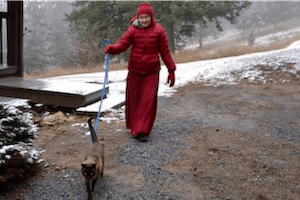 After welcoming in the new year, we were still waiting for winter to come. There was some snow early in January, but it usually melted the following day and temperatures did not stay below freezing for very long.

Just as we were beginning to envision a winter without much snow and a summer with resulting forest fires, it snowed for four days continuously as we scrambled to clear the paths so our winter retreatants could get from one building to another.

The electricity went out for a day and we were grateful to the linemen who worked through a snowstorm overnight to restore it. Meanwhile, the Internet went out for four days.

On the fifth day, there was a break in the snowfall long enough for us to visit Tim Wilson, our architect, before it resumed. Then in the last two weeks of January, the temperature became unseasonably warm and the snow has turned into slush. Now we’re wondering: will winter return? Or has climate change taken over? 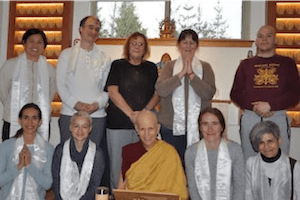 Many people want to do some reflection and purification at the end of the year. It’s a time to pause, evaluate, and reaffirm our priorities or set new ones. The Vajrasattva practice is extremely good for this purpose, and so the Abbey had close to a full house of retreatants for a five-day retreat.

Ven. Tsepal began guiding the retreat, inspiring people to do the four opponent powers of purification. When Ven. Chodron returned from Asia, she took over leading the teachings, encouraging people to generate kindness, forgiveness, and bodhicitta. Watch the teachings here.

On the last day, seven people took refuge and precepts. Take a look at the photos of the retreat and rejoice! 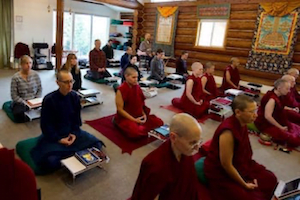 This year, our annual winter retreat is on Shakyamuni Buddha and the stages of the path to awakening. Thirteen guests joined the monastic community for the first month of the retreat, in which we do five meditation sessions and one study session.

At the conclusion of the retreat, the participants did the Vajra Daka fire puja to purify negativities and then had a go-around to share their thoughts and experiences. Take a look at the smiling faces of the guests who joined us for the one-month retreat here. You can read some of their reflections here.

Almost everyone dedicated their mantra recitation to help collect the merit to construct a beautiful new Buddha Hall with multiple meditation halls, classrooms, a library, and more. Our target is to to join with others around the world to recite at least 3 million of the Buddha’s mantra—om mune mune maha muneye svaha—by Vesak Day on May 7, 2020. You can join too, even if you’re not doing the retreat. Find out more here.

The Abbey community will continue in retreat until March 27. Then, on March 29, we welcome all of you to join us for Sharing the Dharma Day and a celebration of the completion of the retreat. 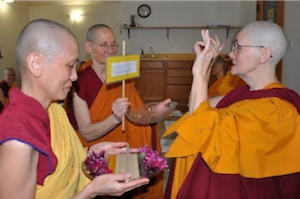 In keeping with Vinaya (monastic discipline), the bhiksunis at the Abbey do the three important Vinaya rites and practices each year: posadha (fortnightly confession and restoration of precepts) varsa (rains retreat), and pravarana (invitation at the conclusion of varsa).

Because we don’t have monsoon rains here, instead of doing varsa in the summer, we have made it a “snows retreat” and do it in the winter. When a monastic community of four or more fully ordained people do these three practices, the land in which they live becomes a “central land,” one of the ten fortunate conditions for a precious human life.

This year we entered varsa on January 11—see photos of the ceremony here and learn more about vinaya and our three rites here. The varsa lasts for three months and is not the same as our annual winter retreat, although the two overlap partially. 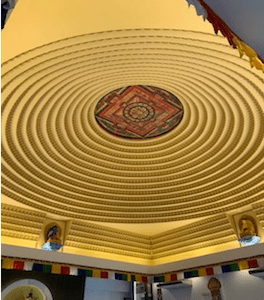 Having continued with research for the Abbey’s new Buddha Hall while in Asia, Vens. Chodron and Damcho returned with new ideas and information. They were inspired by a ceiling dome filled with Buddhas that they saw at the Butterworth Lay Buddhist Society in Penang, Malaysia, and shared ideas for something similar with our architect, Tim Wilson of Momentum Architecture. He was immediately taken with the idea. The Buddha Hall team will meet with him again soon to see what he has come up with.

Meanwhile Tim introduced the team to Mark, who will be the mechanical engineer. He has a great plan for the heating and air-conditioning for the hall. Both Tim and Mark are impressed that we want to build for the long-term so that the Buddha Hall and our other buildings will be used by Dharma practitioners for centuries (with some improvement, of course, as technology develops).

Many people have asked when we will start construction. Before doing so, we need the input of many experts—a structural engineer, mechanical engineer, civil engineer, electrical engineer, acoustician, septic field designer, and so forth. How long this takes will influence when we start building.

Due to the climate here, beginning construction in May is most opportune for having the shell and envelope nearly complete by the time winter snow comes. Starting later in the year creates many difficulties. When we built Chenrezig Hall, we began construction in August and experienced first-hand the problems when the snow falls and the shell and envelope aren’t finished. We want to avoid that this time!

If all the engineers’ plans are complete by May 2020, Tim has the construction documents ready, and we’ve been able to interview and select an excellent contractor for the project, then we’ll break ground. But if all these causes and conditions don’t come together in the next four months, then we’ll begin construction in May of 2021.

We’ll keep you posted as we know more. In either case, keep saying Shakyamuni Buddha’s mantra, filling your piggy bank, and watch our website to learn about the project and see the latest updates. 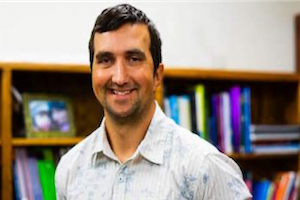 The Abbey received a request for a speaker to participate in an interfaith panel discussing the role of mindfulness in spiritual practice. Since we are in retreat, we asked our friend and long time Dharma student Ryder Delaloye, who is also an educator and consultant on Social, Emotional, and Ethical (SEE) Learning, to represent us. Here is his report:

I was grateful to represent Sravasti Abbey at this forum to share about how Buddhists approach and practice mindfulness. Members of the interfaith community discussed the place and history of mindfulness within their respective faith traditions. Panelists included representatives from the Buddhist, Catholic, Hindu, Muslim, and secular communities.

In representing Buddhism I focused on the role that mindfulness plays in the development of ethical discipline, virtue, kindness, and compassion and situated this important quality within different domains of Buddhist psychology, practice, and philosophy.

The panel identified how each faith tradition supports the development of mindfulness and how mindfulness serves an essential role in the development of spiritual traits and qualities. I felt inspired and encouraged to know that practitioners from these faith traditions put forth such strong effort to direct their minds toward the pursuit of virtue and taming their afflictive states of mind.

Each year at Ven. Chodron’s talks in Singapore, people have the opportunity to make prayer requests for harmony in relationship, good rebirth, good health and long life, freedom from obstacles, and so on.
The Abbey does a puja every Chinese New Year—this year on January 25—to create merit and dedicate it as all these people have requested. It is a happy occasion to bring in the new year by engaging in virtue and reinforcing the strong connection we feel with our Dharma brothers and sisters halfway around the world.

See photos of the puja here. 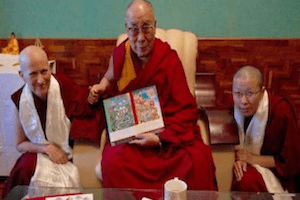 Offering to His Holiness
Ven. Chodron had the opportunity to offer Volumes 3 and 4 of The Library of Wisdom and Compassion book series to His Holiness the Dalai Lama directly while in India last year. Rejoice in the offering and see photos here.

Talks in Asia
More talks from Ven. Chodron’s travels in Asia have been posted on ThubtenChodron.org. Listen to her talk at the Je Tsongkhapa Conference on misunderstanding kindness in Mundgod, India. Listen to the final talks she gave in Singapore—How a Buddhist Deals with Burnout and Creating the Causes for Rebirth in Amitabha’s Pure Land. You can also listen talks given in Penang, Malaysia—Following in the Buddha’s Footsteps, Creating Habits for Happiness, and Anger and it’s Antidotes.

Chinese Translation
The translation of Approaching the Buddhist Path, Volume 1 of The Library of Wisdom and Compassion series, into traditional Chinese has just been published! Chinese readers can purchase it here.

College Behind Bars
Because the Abbey is engaged in outreach to incarcerated people—sending them Dharma books and DVDs of Dharma talks, speaking to Buddhist groups in prisons, and corresponding with them—we were very interested in a new four-part series produced by Ken Burns on PBS about Bard College giving college courses and offering degrees to inmates. Learn more about College Behind Bars here. We encourage you to watch this moving and inspiring documentary series.

Prayer from Tibet
Our friend Kenryuu made a dedication for the Buddha Hall when he visited Tibet. Watch it here.