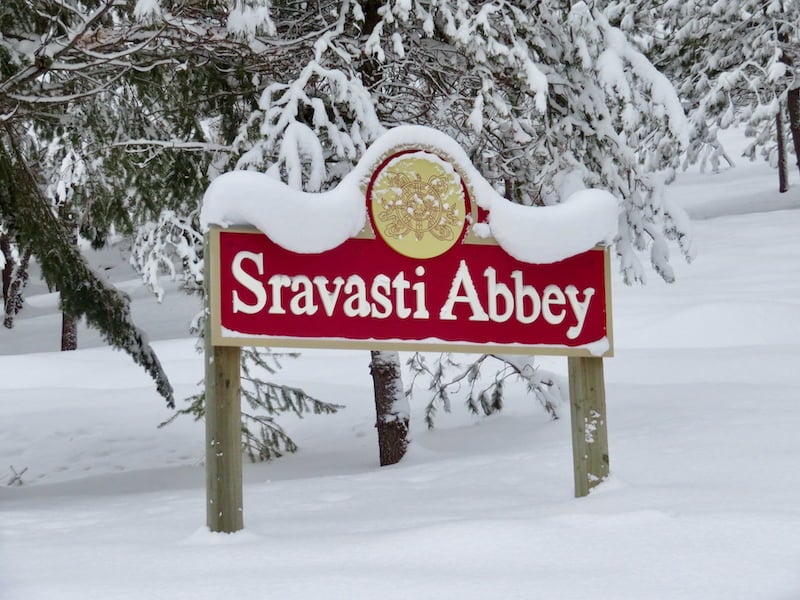 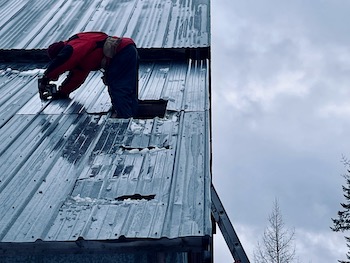 Just as the heat last summer broke records, a few cold days this winter have also broken records. But we’re not complaining about all the snow—the trees are delighted!

The only downside was that the heavy snow combined with wind made the chimney in the workshop break off. We had to patch the roof to keep further snow from entering the workshop, but it has made working in the workshop in the winter difficult to say the least! 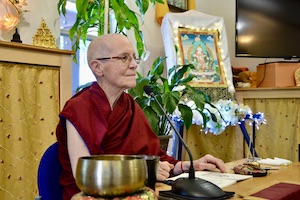 Although the New Year’s Retreat this year was short, it was powerful according to the participants. Meditating on Vajrasattva, they reviewed their past actions not only to see what they wanted to purify but also to rejoice at the virtue they created.

After an introductory talk, the retreat centered on answering questions about the practice. The questions reflected participants’ engagement with the practice and their sincere aspirations to transform their minds.

Ven. Chodron gave instructions that resonated with people’s lives—generating regret instead of guilt for misdeeds, establishing a valid sense of self-confidence, leaving aside notions of reward and punishment gathered from other religions, opening our hearts to others’ situations, and recognizing that we have been the recipient of tremendous kindness from other sentient beings. You can watch the videos of the teachings here. 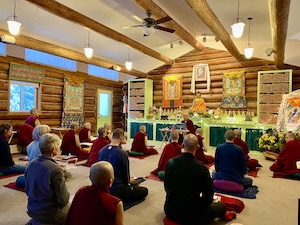 The Abbey monastics and eight long-term guests have begun the annual three-month winter retreat. This year, most of us are meditating on the Medicine Buddha while a small group is doing the Vajrasattva ngondro (preliminary practice).

The Medicine Buddha retreat is taking place in the Meditation Hall and the Vajrasattva retreat is in the small chapel in Chenrezig Hall. Ven. Chodron put us in retreat on Jan. 6, and now we’re settled into the retreat routine.

We’re fortunate to also receive teachings during retreat—it’s especially powerful to be able to meditate on the teachings as we receive them.

In addition to the teachings on Shantideva’s Engaging in the Bodhisattva Deeds on Thursday morning and the teachings on Saṃsāra, Nirvāṇa, and Buddha Nature on Friday evenings, Geshe Yeshe Thabkhe accepted our request to teach Kamalasila’s Middle Stages of Meditation on Saturday mornings, and Katrina Brooks, an excellent translator, makes them accessible to us in English. All these teachings are livestreamed.

Right now, Geshe Thabkhe is giving detailed instructions on the meditations on equanimity and heart-warming love. Based on overcoming our attachment to dear ones and aversion to those who harm us, we contemplate the kindness of others. This leads our heart to open with affection towards all beings. This heart-warming love sees all sentient beings as valuable and worthy of happiness and respect.

These joyful states of mind require practice on our part to generate, because our hurts, fear, resentment, and grudge-holding get in the way. This is where the Shantideva teachings on Thursday morning come in—they give us techniques to dissolve our anger and make peace with others.

See pictures of all the retreatants here.

Also, Ven. Thubten Chodron offers advice on “How to Structure a Meditation Session,” in an excerpt from The Foundation of Buddhist Practice. 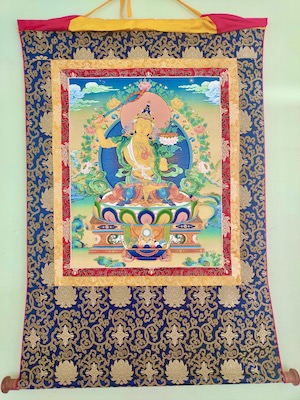 All the revised plans for the Buddha Hall have been submitted, so that all the engineering, the building layout, and so forth comply with the many regulations for commercial buildings. The State Fire Marshal’s Office Plan Review Program has given us feedback on what is needed.

We were also required to submit a SEPA (State Environmental Policy Act) document, which we have done. So, we are nearing completion of the long and complicated process of getting a building permit!

And, we just received a photo from the Tibetan artist in India who has completed the thangka of Manjushri, the Buddha of Wisdom, for the main altar in the Buddha Hall. The painting is gorgeous—very inspiring—and will serve not only to remind us of the wisdom we want to cultivate but also act as an object for developing serenity (shamatha) when doing concentration practice.

We’ve also been in touch with Peter, the British artist in France who is sculpting the three large statues for the main altar. He may come to the Abbey in the spring to work on the statues here. We’ll have more news on that soon. 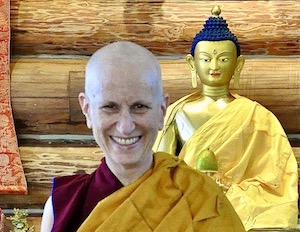 Venerable Thubten Chodron gave an online talk to an audience in Turkey organized by Merve Karakus, a mindfulness meditation teacher based in Istanbul. About 440 participants attended her talk on “The Path to Self-Acceptance” in which she spoke on how to become your own friend and cultivate inner peace.

Ven. Chodron emphasized the importance of releasing the pressures of social conditioning and expectations, stopping the comparing mind, and recognizing guilt as an erroneous mental state. The talk was followed by a rich Q&A session with more questions raised than could be answered in the time given.

The participants rejoiced in the opportunity to reflect on a meaningful topic and took away practical advice they could apply in their daily lives. The talks will be posted in Turkish and English shortly.

Venerable Sangye Khadro taught a two-day online class on Buddha Nature, the potential for enlightenment that resides within all sentient beings. The class was hosted by O Sel Ling in Spain. Ven. Sangye Khadro explained the methods that the Buddha practiced to transform his mind from an unenlightened state to an awakened one. The talks will be posted in the near future. 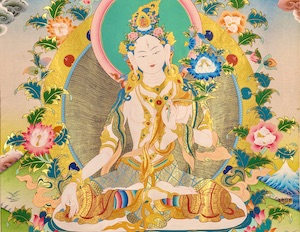 The Abbey community reconnected with Khensur Wangdak Rinpoche recently. Rinpoche had blessed the land after it was purchased and taught at the Abbey in the early years. He has been unable to come since then due to health issues.

When we learned that he would give the White Tara permissory rite every month, we immediately asked him if we could join over Zoom and he agreed. His translator, Jeff Allen, did a wonderful job translating from Tibetan into English.

All of us were very grateful to Rinpoche and Jeff for making this possible. Now it’s time to practice! 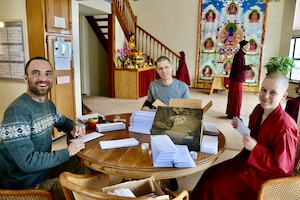 The Retreat from Afar gives those unable to join the retreat at the Abbey an opportunity to participate from home.

The Abbey community does five sessions a day, while the retreatants from afar do one session of the Medicine Buddha practice daily.

We also make weekly teachings on the practice available. It’s never too late to join the Retreat from Afar. Contact the Abbey’s office to enroll.

Gavin Discovers the Secret to Happiness 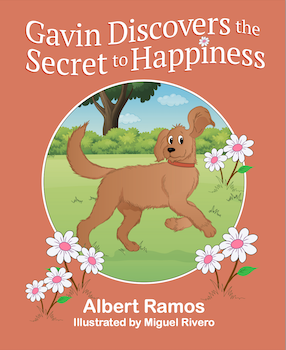 One of the book contests in which we entered Gavin Discovers the Secret to Happiness provides reviews that are sent out via their mailing list. This book received a five-star review!!! Wow!

The review is moving—the book really touched the reviewer’s heart. Read it here and congratulations to our friends Al Ramos (author) and Miguel Rivero (illustrator).

Also, Tracy Simmons from Spokane Faith and Values interviewed Al Ramos for the Religion News Service. Those of us at the Abbey who participate in the Abbey’s prison project are delighted that Al shared how the Buddhadharma has benefited him, enabling him to share his talents and compassion with others.

In addition, Northwest Dharma News published Ven. Chonyi’s article about the Abbey’s prison work, including interviews with two people who wrote books that the Abbey published. One was Al Ramos, who was mentioned above. The other was Calvin Malone, who co-authored Unlocking Your Potential: How to Get Out of Your Own Way with Ven. Chodron. 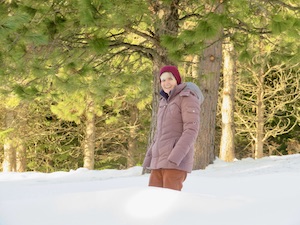 Mary Grace, a long-time friend of the Abbey, has joined us for winter retreat. Arriving at a snow-covered Abbey, she wrote:

The sublime stillness of this winter season
Cultivates a deep listening to the truth of the Dharma.

At times my practice is like the gentle falling snow.
Other times like a blizzard with no direction,
Being pulled by the full force of saṃsāra.

Or like walking under the eaves mindlessly
And startled by the weight of the heavy snow
Suddenly giving way, like a major karma ripening.

And on those rare moments,
It is like standing firm on the frozen earth,
Awakened by the chill of Mara,
Eyes held firm on the majestic snowcapped mountains
Of the possibility of full awakening.

Watching your vision flourish
Like the glistening crystals in the field
Fills my heart with joy and gratitude. 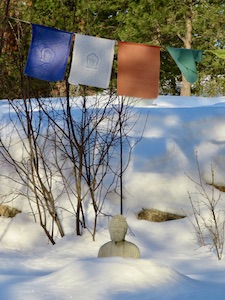