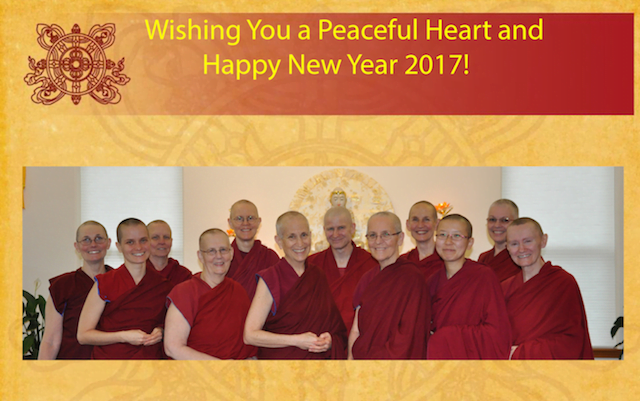 December has seen much coming and going, and plenty of snow. Present accumulation is around 10 inches.

A flock of about 30 quail have hung around, charming all of us with their adorable clowning around. While our winter turkey population is down from recent years, Ven. Jampa faithfully delivers a daily dose of bread scraps and a little cracked corn to the ones who show up, while Ven. Semkye keeps an eye on our local deer.

As Ven. Chodron and Ven. Damcho engaged in Dharma events in various Asian countries, the community carried on by studying, practicing, and sharing the Dharma at the Abbey.

Ven. Chodron and Ven. Damcho in Singapore and Malaysia

Ven. Chodron made her annual visit to Singapore and taught widely at many different centers and temples in the island-nation from the Theravada, Chinese Mahayana, and Tibetan Buddhist traditions.

She taught the Vimalakirti Sutra at the Vimalakirti Buddhist Centre, and gave a talk on self-confidence at Kong Meng San Phor Kark See, the largest temple in the country. Poh Ming Tse Temple hosted a talk and book launch of her newest publication, Good Karma, where donors sponsored 210 copies for free distribution.

Venerable spoke on healing prejudice at Buddhist Library, and taught on meditation and morality at the Tibetan Buddhist Centre. At Pureland Marketing, she spoke on The Power of Joyous Effort (two talks here and here), and returned to Buddhist Fellowship for talks on giving up blame and living authentically. (Click on the hyperlinks to access audio recordings for each of the talks.)

In addition, Ven. Chodron met with many old friends and students and greeted many new students and friends. The folks at Pureland Marketing and their volunteers took good care of the nuns, and the volunteers from Friends of Sravasti Abbey Singapore did a wonderful job organizing the tour and making Venerable’s books available. Our deep Dharma connection with Singaporeans continues to the appreciation of all. Photos are here.

Vens. Chodron and Damcho then traveled on to Malaysia, where they were hosted by Dhamma Vijaya Buddhist Centre in Kuching, Sarawak, on the island of Borneo. Ven. Chodron taught a two-day retreat at the Borneo Tribal Village and Ven. Damcho led the meditation sessions in English and Chinese. After the retreat, Ven. Chodron gave two public talks at the city centre, and the nuns had a spot of time to visit the national and Chinese history museums to learn more about Sarawak’s fascinating history. Photos are here.

The two venerables continued their journey to Bangalore, where Ven. Chodron gave a talk to a yoga class at the School of Ancient Wisdom, and another talk organized by the Garden of Samadhi Mind Centre at the Srishti School of Art, Design, and Technology.

They then went to Mundgod for the first international Emory-Tibet Symposium of Scholars and Scientists: Bridging Buddhism and Science for Mutual Enrichment. Western scientists and Tibetan monks who have studied Buddhism and science were the core presenters and panelists, discussing topics such as reliable cognition, the existence of mind, the origin of the universe, and what it means to be a living being.

His Holiness the Dalai Lama has encouraged and participated in Buddhist-science dialogue for 30 years, and as many of the monks have been studying science at Emory University in the USA, the dialogue is now exceptionally rich. Read about day one of the event here, day two here, and day three here. Videos of the panel discussions are here.

In Mundgod, Ven. Chodron also spoke to 50 students at the Pema Ts’al Hostel-School and to about 230 nuns at Jangchub Choeling Nunnery. Both events were very special to Ven. Chodron, who commented, “For four decades I’ve received kindness from the Tibetan community. Being able to teach young Tibetans and the nuns gives me the opportunity to repay that kindness.”

The two Abbey nuns stayed in Mundgod to see His Holiness the Dalai Lama award Geshe degrees to the first 20 nun-Geshes ever!

What a truly special and historic occasion! (Read about it here.) After the four-day debate session at Jangchub Choeling Nunnery that many nuns participated in, His Holiness presided over the convocation on December 22, granting the Geshe degrees to the 20 nuns.

The prime minister of the Central Tibetan Authority spoke, as did other officials, monks, and the nun who scored the highest on the exams. For the new Geshes, this was the beginning of their lives as empowered leaders and teachers.

The ceremony was a celebration of a dream come true, and we rejoice for all those at the Tibetan Nuns Project and the Central Tibetan Administration Department of Religion and Culture who have worked tirelessly for decades to provide the nuns with a Dharma education equivalent to a Ph.D. degree. We also honor the monk geshes who taught the nuns for decades.

Photos of the Geshe-ma Convocation are here. Ven. Damcho shares her reflections on the entire Asian tour in two Bodhisattva’s Breakfast Corner talks here and here.

Meanwhile, back at the Abbey, the community enjoyed a full month as well.

Forty-plus people gathered for Sharing the Dharma Day (SDD). Ven. Tarpa gave the talk, emphasizing some of the real-life stories in Ven. Chodron’s book, Don’t Believe Everything You Think, wherein people share how they practice verses from the Tibetan poem, “The 37 Practices of Bodhisattvas” in daily life. You can see the talk here.

The afternoon discussion focused on ethical conduct, and, never to be underestimated, the potluck lunch was fantastic. Winter Dharma photos are here.

This was our next-to-last session on Don’t Believe Everything You Think. Chapter by chapter, month by month, we have delved into it for three years. We will finish the book on January 8 with the final SDD before winter retreat.

When Sharing the Dharma resumes in the spring, we will begin An Open-Hearted Life, a beautiful guide to growing compassion by Ven. Chodron and psychologist Russell Kolts. The first part of the new 2017 schedule is posted. Please join us this new year.

Abbey residents value opportunities to share their knowledge and compassion with others in society.

Ven. Jigme, who was a psychiatric nurse practitioner before becoming a Buddhist nun, visited Eastern State Hospital, a psychiatric hospital near Spokane, at the invitation of one of the administrators. There she spoke to the staff about meditation and led them through some basic meditations. On her second visit, she spoke with the chaplain about introducing meditation to the patients. Read more here.

Vens. Chonyi, Samten, and Tsultrim attended the Good Neighbor Conference: Addressing Hate through Advocacy and Action in Spokane on December 3. Responding to the marked rise in public hate speech and hate-related vandalism since November, four Spokane organizations quickly organized the conference at Gonzaga University, which drew nearly 300 people. The City of Spokane, Spokane police, and Spokane County sheriff were involved, as well as interfaith organizations and the Gonzaga Center for Hate Studies.

Citizens of all ages joined together with enthusiasm to hear panels that included discussion of social media’s role in addressing hate crimes, LGBTQ advocacy, immigrants in America, Islamophobia, and “Gracism,” a religious panel on the intersection between racism and grace. The nuns were proud of our Spokane-area community and look forward to more opportunities to share and deepen understanding.

On December 17, Youth Emergency Services (YES) hosted a holiday celebration for homeless and at-risk teens, their siblings, host and birth families, as well as YES volunteers and staff. The event was held at a local church and close to 80 people attended, with two Abbey monastics and two anagarikas pitching in to help cook and clean. It was a rewarding and fun experience to see the families connect with each other over a “home-cooked” meal. Teens and their families received gifts donated by many area residents, including knit hats to keep them warm during the winter, and stockings full of baked goods.

Most of the residents and long-term guests took a field trip to see the Bodies Human exhibit at the Mobius Science Center in Spokane. The exhibit displays human bodies, preserved through plastination, showing what we all look like underneath the skin. This winter on the Four Establishments of Mindfulness Retreat, we will reflect on the body’s foulness. Our meditations will be more vivid after this outing!

We concluded our 8th season of now-weekly teachings at the Unitarian Universalist Church of Spokane. An average of 40 people—church members and others from the wider community—come together each week to learn and practice meditation and Buddhist ideas for cultivating virtuous qualities. Five Abbey nuns, teaching in pairs, rotate the opportunity to share the Dharma. For over two years we have studied An Open-Hearted Life by Dr. Russell Kolts and Ven. Chodron, a superb text for developing compassion. The class will continue as a student-led group through the winter. Nuns will return in April.

See photos of the Community We Live In.

December’s special and holy days came back to back this year. On December 23, the community celebrated Lama Tsongkhapa Day, commemorating the parinirvana of the magnificent Tibetan scholar, yogi, and founder of the Gelug lineage. We took the eight Mahayana precepts together, then offered a mid-morning Lama Chopa Puja, making many beautiful light and food offerings on the altar.

Late in the afternoon when the sun was nearly set, the community again made light offerings, chanting the Request to Lama Tsongkhapa as we circumambulated the Meditation Hall. In a fitting close to the special day, we reviewed teachings on the Gomchen Lamrim that evening. As we dedicated the merit of our day, people’s minds seemed especially directed towards peace in the world.

Two days later the community did our annual Christmas Day reading of Shantideva’s Engaging in the Bodhisattva Deeds. Everyone gathered in the Meditation Hall after breakfast and quietly began to read the text aloud at their own speed. It’s beautiful to hear the gentle murmur of voices reciting the instructions on how to develop bodhicitta.

Although not an official holiday, there was much rejoicing when Vens. Chodron and Damcho returned from their long and meritorious journey. Finally, on the last day of 2016, we were together again in the Meditation Hall engrossed in Vajrasattva purification meditation with over 50 retreatants. Holy day event photos are here.

May the light of Tsongkhapa’s teachings dispelling the darkness of ignorance always increase!

Ven. Chodron’s teachings on the lamrim—the graduated path to awakening—are now available as free e-books! Wee Chiang, a volunteer from Singapore, has put together transcripts from teachings at Dharma Friendship Foundation in the 1990s. The teachings are divided into four books: Foundations of the Path, Initial Scope, Intermediate Scope, and Advanced Scope. Download all four e-books here.

In addition, Wisdom Publications launches the first installment of their new Wisdom Academy course, Buddhism: One Teacher, Many Traditions with Ven. Thubten Chodron.  Beginning January 9, the 10-lesson course includes Ven. Chodron’s video teachings, guided prayers/meditations, an ebook version of Buddhism: One Teacher, Many Traditions, quizzes with each lesson, and access to a discussion forum with an international community of learners. There is a tuition charge for the course. You can learn more here.

A wonderful photo of Ven. Chonyi was featured as part of the Chase Youth Commission’s “Dear World” photography project at the Spokane anti-hate conference. It was the cover of their Facebook album. What a great picture! You can see all the Spokane Dear World photos here.

The Spokane Spokesman Review interviewed Ven. Chonyi, among others, about the meaning and benefits of gratitude. Read it here.

Stephen shares his reflections on self-acceptance.

Ramesh, who lives in Bangalore, India, tells us about the death of his father and what he learned from it.

Mary Louise joined long-term visitors Ven. Thien, Ven. Tenzin, Alejandro, and Christina to offer service and practice with the community. We appreciate their practice and their help.