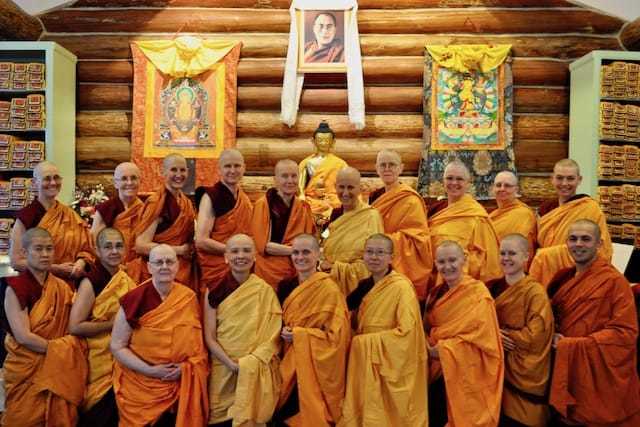 We wish all of you a New Year filled with Dharma wisdom and great compassion. May your fortitude increase to transform difficulties into joy and courage such that your inspiration to generate loving-kindness toward all radiates to everyone you encounter. May you become an agent for peace in our chaotic world.

We have had many guests over the holiday season and on Christmas, as per Abbey custom, we all read Shantideva’s Engaging in the Bodhisattva’s Deeds from beginning to end.

This inspiring book focuses on the two bodhicittas—conventional and ultimate-and encourages us to approach the New Year with hope and optimism, knowing that our happiness and suffering are related to our thoughts. By changing our perspective on external events, we can change our experience.

The Abbey community entered our annual monastic retreat for the sixth year running, with a record-sized group of 19 monastics. In addition to the 14 resident monastics, we have guest monastics joining us from Russia and the Netherlands. We are also thrilled to have senior bhikshuni Venerable Sangye Khadro observing varsa with us.

Everyone rejoiced to see the sea of red robes in the Meditation Hall- which we are fast outgrowing-and felt privileged to continue to carry out these rites passed down by the Buddha and the Sangha for more than 2,500 years. By carrying out the poṣadha (bimonthly confession), varsa (rains retreat), and pravarana (invitation for feedback), we are creating the causes for America to be a central land where the Three Jewels flourish and the sangha can become firmly established.

Sharing the Dharma Day and Vigil for Victims of Gun Violence

A nice crowd of about 50 people gathered for our last Sharing the Dharma Day of the year. Many Dharma friends wanted to take the opportunity to be at the Abbey before we enter our three-month winter retreat.

Ven. Lamsel led the morning meditation, a reflection from the book, An Open-Hearted Life. Ven. Chonyi’s Dharma talk, “A Healthy Diet for the Mind,” wove together several themes from the day: the importance of “mental hygiene” (the term His Holiness the Dalai Lama uses to refer to practices that care for our minds); a candlelight vigil for victims of gun violence; and the celebration day of Lama Tsongkhapa, one of the great scholar-yogis of the Tibetan Buddhist tradition and founder of the Gelugpa lineage. Watch the talk here.

Ven. Semkye led a thoughtful discussion about how we take in and process the news. The program concluded with a lovely, simple candlelight ceremony to recall that compassion and wisdom are the pathways to peace and the ultimate end of violence for all beings. See photos here.

(Photo by Tracy Simmons)
Kathy Elton, a skilled mediator and friend of the Abbey, graciously offered a mediation seminar to the community for five days in December.

Kathy has decades of experience in the mediation field, and knowing our community, she was able to select pertinent aspects to teach us. Everyone enjoyed the experience and benefited a great deal from her lectures, discussions, films, and role plays.

Kathy introduced us to restorative justice, conflict styles, negotiation, mediation processes, and the Quaker Clearance Committee, a practice to help us hear our own inner wisdom with the support of others. Learning about the role of a mediator was illuminating, and we found the seminar helpful in increasing our self-awareness, listening, and communication skills.

Learning subjects such as mediation and non-violent communication helps us as Dharma practitioners to identify parts of ourselves that we weren’t previously aware of. We also learn practical skills that help us express our compassionate motivation more effectively.

The Compassionate Kitchen is Published!

The Compassionate Kitchen: Buddhist Practices for Eating with Mindfulness and Gratitude is now in print.

Based on talks by Ven. Chodron on how to bring our Dharma practice to procuring, preparing, and eating food, the book explains how to cultivate constructive attitudes around food, the verses for blessing and offering our food, and chapters by students who have successfully dealt with eating disorders.

Take a look at the webpage about the book, where you can find recordings of the chanting done before and after meals. Read the lovely article about the book done by the Religion News Service. Here’s a good article from Tricycle on it, and another review that gets to the essence of the book.

Outreach in the Community

Ven. Semkye was invited to Spokane’s KYRS Thin Air Radio to give an interview on the program “Personally Speaking,” which features people in the Spokane area who are engaged in interesting activities. The interview focused on the founding and history of Sravasti Abbey, Ven Semkye’s personal journey, and how Sravasti Abbey aspires to fulfill its slogan of creating peace in a chaotic world. Listen to it here.

Our local Youth Emergency Services delivered a Merry Christmas to 220 children living in the greater Newport area. Through the generosity of many-including Abbey residents and our friends from the Unitarian Universalist Church meditation class in Spokane-the children received gifts and enjoyed a nice family dinner.

With pizza, hot and cold drinks, candy canes, balloons, and a special visit from Santa and Mrs. Claus, the evening was a hit. In true community spirit, the local middle school hosted the event, the local hospital provided toiletry bags for the kids, and an anonymous donor provided a large box of children’s books to be given away. No child left empty handed. Vens. Tsepal, Nyima, and Tenzin attended the party, helped wrap last-minute gifts and hand out presents.

We reported on the first part of Ven. Chodron and Ven. Damcho’s Asian tour-beginning in Taiwan and Indonesia-in the December eNews. The nuns continued on from Jakarta to Jambi and Palembang on Sumatra island in Indonesia and ended their teaching tour in Singapore.

The Buddhist history of the Jambi province-situated along the east coast of the Island of Sumatra-dates back to the Srivijaya Kingdom of the 8th through 12th centuries. Archeological discoveries are still being made in Muara Jambi, the site of over 100 Buddhist candis (stupas, monuments, and temples) about a half hour’s drive from Jambi City, where Ven. Chodron led a short retreat.

About 80 temples remain buried under plantations, industrial work sites, and a large mosque. The local government is not so keen to uncover the area’s Buddhist past, as Indonesia has a majority Muslim population. Read a short article about the temple complex.

Touring the ruins, which involved walking on a path through the jungle, gave the nuns a feeling for life back when this area contained a flourishing Buddhist monastic university. Watch Ven. Chodron’s Bodhisattva’s Breakfast Corner reflections.

Ven. Chodron’s retreat at Wihara Sakyakirti Jambi focused on “True Happiness through Bodhicitta.” About 80 people came together to learn about the two methods of generating bodhicitta. They also took the eight Mahayana precepts for a day, something they had not done before. The last session of the retreat was open to the public and about 400 people attended.

On the last day, retreat participants made a pilgrimage to Koto Mahligai Temple, where many ruins lie under ancient trees, and a hill where it’s said that Lama Atisha lived with his guru, Lama Serlingpa, the master who instructed him on the methods to generate bodhicitta. The retreat ended with everyone chanting and circumambulating one of the large candis, letting the energy of this special place sink in.

See lots of photos of the ruins-plus wonderful pictures of the nuns visiting a K-12 school-on Facebook.

The next day, the Venerables left for Palembang, the capital of South Sumatra. After visiting some Buddhist archaeological sites, Ven. Chodron gave an evening talk at Wihara Dharmakirti that was attended by at least 600 people. She spoke on how we can learn from Lama Atisha, who traveled from India to Jambi to receive teachings on bodhicitta and later brought them to Tibet. She then turned to the topic of “Living an Open-Hearted Life,” focusing on the importance of seeing the kindness of our friends, enemies, and strangers. Listen to the talk here.

The Venerables then flew to Singapore, where many sincere listeners attended the talks and the Friends of Sravasti Abbey Singapore volunteers helped actively at book tables. The teachings began with “The Three Higher Trainings” at Awareness Hub (listen to the talk here), followed by the launch of Volumes 1 and 2 of The Library of Wisdom and Compassion at Poh Ming Tse Temple. (Watch for Volume 3, coming out January 22!) Benefactors kindly sponsored 100 sets of both books for free distribution! Listen to the talk here.

Ven. Chodron then conducted a weekend seminar at Amitabha Buddhist Centre, focusing on the four seals- the four characteristics that mark a Buddhist teaching-and on mind and rebirth. Watch the teachings here. At Tibetan Buddhist Centre, she spoke on Vasubandhu’s Ten Great Vows. If your practice of bodhicitta needs a boost, listen to this talk here!

Keeping up connections with centers in other Buddhist traditions, Ven. Chodron spoke at the Buddhist Library on “Right Speech in an Age of Fake News,” and at Buddhist Fellowship on “One Teacher, Many Traditions: But What is the Path?” Listen to those talks here and here.

She finished teaching Chapter 7 of Shantideva’s Engaging in the Bodhisattva’s Deeds–hear the talk-and led a one-day Medicine Buddha workshop at Pureland Marketing. Teachings on both the Shantideva text and the Medicine Buddha practice will be continued next year.

Ven. Chodron sums up her thoughts on the teaching tour in Asia in this Bodhisattva’s Breakfast Corner talk. Keep an eye out as the remaining talks are posted on ThubtenChodron.org in the coming weeks. The talks in Taipei have been posted here, here, and here. Talks in Jakarta are here, here, and here.

Many practitioners request Ven. Chodron to perform the refuge ceremony in which they can also receive any or all of the five lay precepts.

The Abbey has assembled a short book from many resources and Dharma teachers to help people prepare to take refuge in the Three Jewels and to receive the five lay precepts.

You can read it online here or download the PDF version here.

Watch a wonderful short 7-minute video here about the Dalai Lama’s recent pilgrimage to Bodhgaya, including a compact teaching on the essence of the Buddha’s teachings.

For those of you who want to shed fun activities that you did in the past motivated by questionable intentions, Stephen shares his thoughts in “Ethical Ways to Meet Our Needs.”

For Spanish speakers: Dharma Latino, a YouTube channel that shares Dharma teachings in Spanish, has published a series of short talks by Ven. Chodron on practical Dharma questions with Spanish subtitles. See them here.

Ken reflects on “The Ultimate Journey“—researching the mind.

Luis shares his poem “The Warrior of Dawn.”

Bob talks about “Transforming Aging and Illness into the Path.” Read his thoughts here.

Click here for a quick look at the Abbey Event Schedule