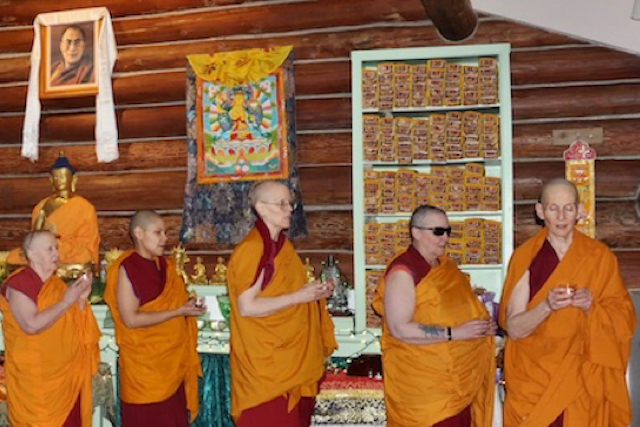 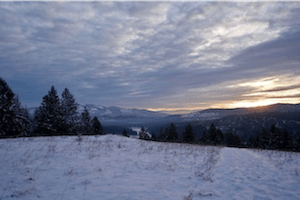 New Year’s Day is merely designated as a fresh beginning, for each day and each moment is a new opportunity to cultivate wisdom and compassion. Still, we wish you a joyful new year filled with wisdom and compassion as all of us work together to create peace in a chaotic world. 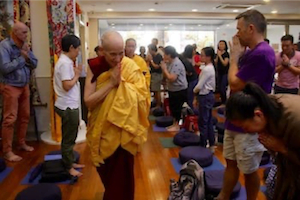 Vens. Chodron, Chonyi, and Damcho just returned from a five-week trip to Singapore, Malaysia, with a continuation to India. Ven. Damcho wrote two travelogues about the trip. Read about the Singapore and Malaysia journey here.

It was a wonderful experience sharing the Dharma. See Singapore photos here and Malaysia photos are here.

Part 2 of Ven. Damcho’s Travelogue recounts the time in India. (Read it here.) Highlights of the trip included an interview with His Holiness the Dalai Lama and Ven. Chodron’s participation in an international conference on the life, thought, and legacy of the great Tibetan Buddhist scholar-yogi Lama Tsongkhapa to commemorate the 600th anniversary of his passing into nirvana. Photos are here.

Back at the Abbey, the resident community and guests commemorated Lama Tsongkhapa day by doing the Lama Tsongkhapa Guru Puja and making many light offerings. See photos here. 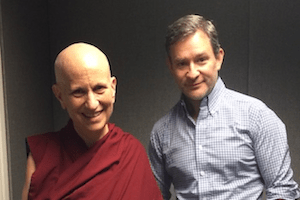 Dan Harris from ABC News interviewed Ven. Chodron on his Ten Percent Happier podcast. The interview covered a wide range of topics and a combination of serious and humorous dialogue.

Listen to the interview entitled “What’s Your Motivation?” on Ten Percent Happier with Dan Harris. 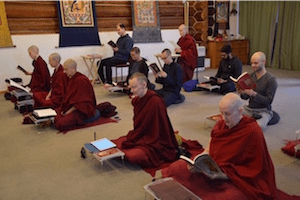 As is our annual custom, the Abbey community read aloud Shantideva’s Engaging in the Bodhisattva’s Deeds on Christmas Day. Written in ten chapters of verse, it is one of the most widely respected texts on the methods for generating bodhicitta and engaging in the six perfections that bodhisattvas practice to attain full awakening.

Everybody felt very inspired afterwards, and we all look forward to Ven. Chodron teaching on this extraordinary work after our winter retreat. Monastics shared their insights from doing this annual practice on Bodhisattva’s Breakfast Corner—watch their Christmas Day talk here. 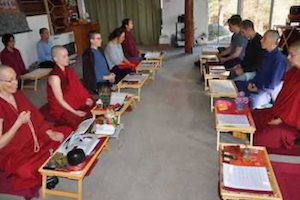 Nyung Ne purification retreats are a rare occurrence in the US, making the Abbey’s annual Thanksgiving Nyung Ne retreat a special event.

This year, participants arrived from Spokane, Los Angeles, Denver, Atlanta, New York City, Montana, South Carolina, Florida, and beyond to participate in the five-day retreat—23 for the first round, 15 for the second.

Because of participants’ committed efforts to join in two consecutive Nyung Nes and the collective sincerity of our practice, together we created a gentle yet profound and transformative retreat experience.

The presence of His Holiness the Dalai Lama, the embodiment of the Buddha of Compassion, felt palpable at times. We practiced in solidarity with 30 Dharma friends in Russia who were doing Nyung Ne at the same time as we were. A happy occasion! See photos here. 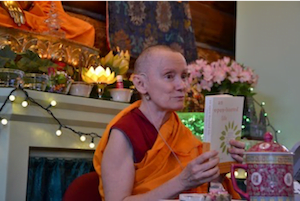 After many days of rain, the sun peeked through the clouds, welcoming about 30 guests who came to the last Sharing the Dharma Day of 2019. Ven. Nyima led an insightful and heart-opening meditation on the kindness of others, which was followed by Ven. Samten’s talk on the same topic.

With humor and creativity, Ven. Samten applied modern-day examples to help us connect with the day-to-day kindnesses we receive from friends and strangers alike. In great detail, she helped us to appreciate the kindness of those who produce, distribute and sell the food we eat. Watch the talk here.

The afternoon discussion was equally invigorating and moving. Photos are here. 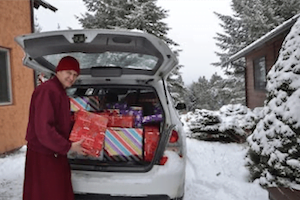 For many years, Sravasti Abbey has been involved on the board and as volunteers with Youth Emergency Services (YES), an organization that supports homeless youth and youth-at-risk in Pend Oreille County.
On Friday, December 13, Abbey monastics and lay friends volunteered for the annual YES holiday gift-giving and dinner party. For two days, Vens. Yeshe and Tsultrim helped prepare a delicious spaghetti dinner for about 100 young people and their families.

Teens received gifts donated to YES, and their families enjoyed the satisfying meal, complete with a variety of desserts and hot chocolate. All the recipients gratefully thanked the volunteers and YES staff as they politely moved through the food line.

The Grinch made an appearance for some holiday photos, and the whole event had a festive feel as children, teens, and adults laughed together and enjoyed a relaxed evening. The Abbey volunteers were glad for the opportunity to give back and serve the local community in a meaningful way. Thanks also to our generous friends from the UU Buddhist meditation class in Spokane who sponsored gifts for so many kids! 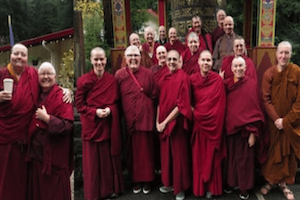 Vens. Jigme, Jampa, Nyima, and Kunga represented the Abbey at the 25th Western Buddhist Monastic Gathering held at Land of Medicine Buddha in Soquel, California. Seventeen monastics from different traditions gathered to discuss, share, and practice the Dharma together. The theme of this year’s gathering was, “Form Together a Great Assembly, One and All in Harmony.”

Each day began with morning meditation followed by talks and open discussions. The talks focused on harmony in the sangha, the importance of recognizing everything as a field of practice, and cultivating gratitude. Open discussions centered around monastic life and its place in society.

Participants were grateful to the Land of Medicine Buddha for hosting the gathering. The magnificent space has many holy objects that inspire the mind, surrounded by majestic redwood trees growing tall and strong. May we build an assembly of monastics just as strong by continuing to come together, support, encourage, and learn from each other, in order to be of great benefit to all. 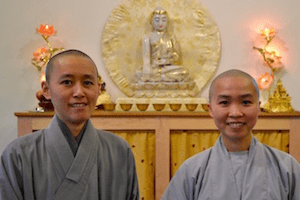 We were pleased that two bhikshunis—Ven. Hanh Thuc from the Vietnamese Buddhist tradition and Ven. Chang Feng from Dharma Drum Mountain in Taiwan—came for extended stays at the Abbey. We learned a lot from one another and became good friends. Ven. Kunga interviewed them. Read her write-up and watch talks by the guest nuns here.

Ven. Semkye had a hip replacement at the end of November and we’re so glad her leg is healing well. She now joins the community for lunch in Chenrezig Hall and did posadha with the bhikshunis in late December.

Kenryuu shares his gratitude for two important teachers in his life——his primary school English teacher and his Dharma teacher. Read it here.