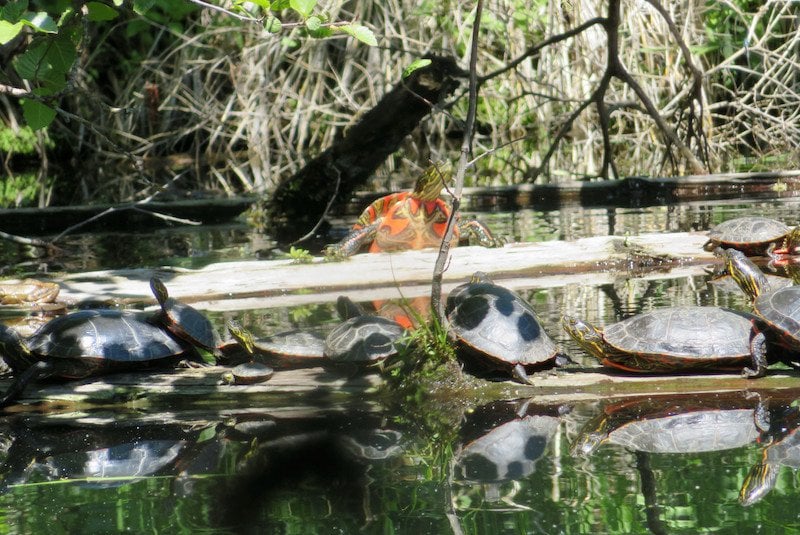 You may have heard in the news that the Pacific Northwest is having a record-breaking heat wave. We’re right in the middle of it! Temperatures are and will be over 100F (40C).

We’re thankful to have air conditioning in some of the buildings and have altered our daily schedule to work outdoors in the evening when it is a little cooler.

We rejoiced at welcoming our first in-person guests for Sharing the Dharma Day a few days ago. The number was limited and vaccinations are required, so we were all safe and delighted to be together again. We’ll tell you more about it in the August eNews.

See photos of our lively springtime here and a wealth of summer activities here. Enjoy photos of the colors of summer at the Abbey here.

Over the long Memorial Day weekend, more than 80 people online and 19 at the Abbey delved into Good Karma: How to Create the Causes of Happiness and Avoid the Causes of Suffering. The book is a commentary by Ven. Chodron on the thought training poem, “The Wheel of Sharp Weapons,” by the 9th century Indian master Dharmarakshita.

As Tibetan teachers often do, Ven. Chodron read from the book and then added comments on some topics and elaborated on others, giving examples of how to practice the Dharma in our daily lives. There were two teaching sessions, two meditation sessions, and a discussion group each day. Watch the edited teachings here.

Learning about karma—our actions—challenges us to examine our intentions and motivations. By applying mindfulness and introspective awareness, we keep our minds focused on virtue and away from distraction, anger, attachment, and confusion.

In addition to giving an overview of the Buddhist worldview, Ven. Chodron explained the first five verses of the poem. Teachings on this text will continue next Memorial Day weekend. See photos here.

About 16 young adults from ages 17 to 29 attended the Abbey’s annual Young Adults Explore Buddhism program. Although it was held for just four days online, this interested and earnest group participated actively and learned everything they could.

Ven. Chodron gave Dharma talks and Ven. Sangye Khadro led meditations. Several other monastics guided the lively discussion groups where participants talked about their values and thoughts about life. Dr. Russell Kolts was a guest speaker at one session, and as usual was a big hit with the youths.

Everyone had a good time and expressed their wish to continue learning the Dharma and getting to know one another. One participant commented at the end of the course, “We haven’t gotten to speak to each other so much, but we already feel like family.” We’ll post the guided meditations from the course soon on ThubtenChodron.org and Sravasti Abbey’s Insight Timer profile. Watch recordings of past years’ teachings here.

Ven. Sangye Khadro led a weekend retreat on “Know Your Mind”—a simplified version of a topic studied in monasteries called Lorig (Mind and Awareness). She explained the nature of the mind or consciousness and the different types of cognitions, such as perception and conception, and the seven types of awareness.

With the help of PowerPoint slides and practical examples, Ven. Sangye Khadro made a complex topic accessible to beginners and experienced students alike.

Abbey monastics guided meditations and led discussions on identifying the difference between perception and conception in our own experience, especially because our afflictions are all based on wrong conceptions.

Watch the teachings and guided meditations here. Part two of this retreat will take place from August 21–22. Find info here.

Due to your kindness and generosity, we met the Buddha Hall Jumpstart Challenge nearly a month before the deadline! Thank you to all those who made offerings to build the Buddha Hall. It will be wonderful to practice together with you once it is built. Watch Ron’s wonderful rejoicing video.

The project is moving forward. We’ve moved the location of the Buddha Hall up the hill a little to a much better location. To adjust to the change, our architect has re-drawn the two required accessible parking spaces.

Next, the civil engineer will do the grading—there is a lot of dirt to move when a building is located on a hillside. We’re hoping he will locate the septic system in a more convenient place, too.

We’re still involved in the permitting process, which is complex because this is considered a commercial building, not a residence. Our acoustician Scott Pfeiffer came by to visit on a “working vacation” trip and had a look at the new site as well. Ven. Chodron gives a short video report here.

Meanwhile, the log cabin at the end of the garden has been dismantled to make way for a cabin for Ven. Sangye Khadro. Our neighbor is a contractor; we’re giving him the material of the cabin in return for removing it and fixing some steps in the garden. He had a team of young men who worked hard in the heat to do this. See photos here.

Conference on the Fragility of the Planet

The Italian Buddhist Union organized an online conference on “Impermanence: Crisis of the Being, Fragility of the Planet” in celebration of Vesak Day. Ven. Chodron offered a pre-recorded Dharma talk on the importance of taking responsibility for the environment.

Ven. Jampa participated live and gave a short talk on how monastic life provides a strong model for living in harmony with the environment through the practices of nonviolence, compassion, and interdependence.

The program included a variety of speakers, such as Zen teacher and author David Loy, who encouraged people to tackle climate issues as part of the bodhisattva path. A beekeeper and a sea shepherd highlighted how humans cannot survive without bees and whales. Richard Gere weighed in on the importance of radically engaging with one another to make an impact on the economy and government policies. Watch the recording here.

Talks by other Abbey nuns

The Forest and Meadows

The Abbey grounds are very beautiful in the spring and summer, with many wildflowers and flowering trees. It’s so relaxing and beneficial for the body and mind to walk in nature.

For more than ten years, we’ve cultivated a warm and friendly relationship with the staff of the Pend Oreille County Weed Board. Each year, someone from their team comes out to take a look at what kinds of noxious and invasive weeds we’re dealing with.

The support and advice that we’ve received from Sharon Sorby, Loretta Nichols, and Dyana Adams have enabled us to identify weeds and remove them through best practices informed by research done by Washington State University.

Ven. Semkye and her team have also been working hard in the forest. Last autumn, some volunteers cut many trees that were either crowded together or dead, and a lot of cleanup remains to be done. A new wood splitter helps cut up much of the wood to use to heat Ananda Hall in the winter, and we will share some with our neighbors too.

There’s also been another construction project this summer—Ven. Losang built a shed to store the firewood! He used wood and roofing that had been stored in the barn, which saved a lot of money. Several volunteers helped him at important points in the construction.

Check the Abbey Events page for much more