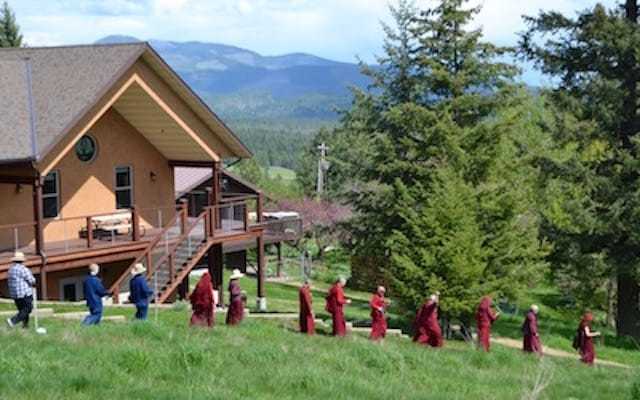 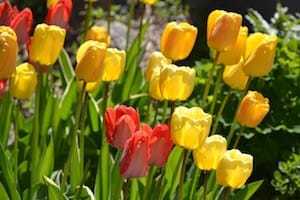 The abundant spring rains brought spectacular blooms to the garden. They’ve also brought clouds of mosquitoes—unusual for us—reminding us that the Abbey is a welcome home for all sentient beings.

Right now the scent of lilacs fills the air and everyone is eager to get outside, including the kitties. The knapweed team is moving into gear, monastics and guests are working in the forest, the veggie garden is offering its first tender salad leaves, and our full schedule of summer Dharma teachings has begun.

Check out the Abbey in Spring photos, find a course or event that suits you, and come visit! 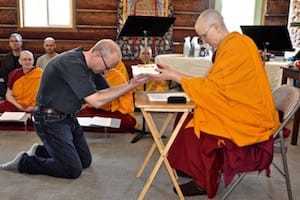 About 40 people gathered for Sharing the Dharma Day, which we combined with our 4th annual kathina ceremony. Ven. Chonyi gave the talk, based on An Open-Hearted Life, the book by Ven. Chodron and Dr. Russell Kolts that teaches how to develop compassion. You can watch it here. After the delicious potluck lunch, the group reassembled for the kathina (pronounced ka-tee-nuh) ceremony.

Practiced since the Buddha’s time, kathina is an opportunity for the lay and monastic community to connect and celebrate their interdependent relationship. Long-time Abbey supporter Ken represented the lay community to offer a “robe of merit” to the monastic community, symbolizing all the merit accrued by the sangha during the varsa, the snows retreat. Varsa’s 90 days of intensive spiritual practice renders the community worthy of receiving robes and other requisites.

All the guests joined in the festivities, bearing representations of their offerings in a procession led by a (cardboard) moose. They enjoyed an afternoon of chanting and meditation while the monastics carried out a rite to symbolically share the robe of merit.

For Abbey sangha, it is a great joy and privilege to engage in practices carried out by Dharma practitioners for centuries and bring them to life here in America. Photos are here.

Teaching Around the World 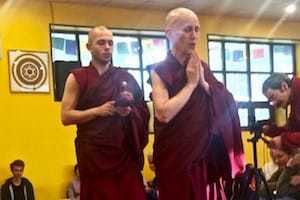 After teaching at Smith College and Kurukulla Center in the USA and Istituto Lama Tzong Khapa in Italy (see the May enews), Ven. Chodron and Caz (her assistant) traveled to Tibet House in Frankfurt, Germany where Ven. Chodron taught on her book, Good Karma. The group was very receptive and she was happy to meet several old friends there. Listen to the Frankfurt talks here. Photos are here.

Then they went on to Moscow, where Friends of Sravasti Abbey Russia hosted two public talks with about a hundred people each on Ven. Chodron’s book, Good Karma. She also led a three-and-a-half-day retreat with 55 people on the practice of Amitabha Buddha and gave another public talk at a countryside retreat center. Watch and listen to the talks here.

Like last year, many millennials attended Ven. Chodron’s Russian teachings. They are enthusiastic about learning and practicing the Dharma, and it was inspiring to be with them. Ven. Chodron enjoyed hearing them chant in Russian the same verses the Abbey chants, using similar tunes. Ven. Tenzin, who had just returned from a five-month stay at the Abbey, led the chanting and serpentine walking meditation that is an Amitabha practice. Ven. Samten, who taught him while he was at the Abbey, was delighted. Russian photos are here. 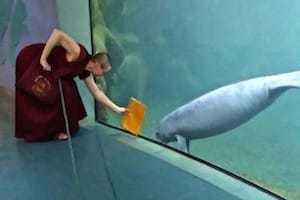 Ven. Tenzin Tsepal shared the Dharma at two centers in Mexico. At the Khamlungpa Center in Guadalajara, teachings focused on remembering impermanence in daily life, relying on a spiritual teacher, the workings of karma, and the Vajrasattva practice. All the talks were well attended. She also led a weekend retreat on the four establishments of mindfulness at a retreat center near the city. Cynthia Hemuda, a friend of the Abbey from Guadalajara, played tour guide for Ven. Tsepal, introducing her to famous city landmarks and murals. Listen to these talks in Spanish and English: Reliance on a Spiritual Teacher and Vajrasattva Purification Practice.

Ven. Tsepal also spent six days in Veracruz on the Gulf coast where over 100 people, mostly university students, attended her talk “Happiness and the Mind.” Her other talks for the Langri Tangpa Study Group were on karma and the Vajrasattva practice. The visit concluded with a weekend retreat on how to work with disturbing emotions in a compassionate way. In addition to making many new Dharma friends while in Mexico, Ven. Tsepal enjoyed visiting the Veracruz Aquarium where she blessed fish with the Namgyalma mantra. Photos are here. 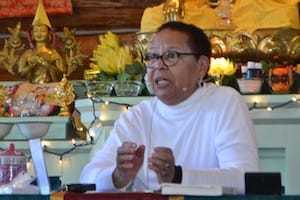 Our retreat with Dr. Jan Willis, professor emeritus of Wesleyan University and one of Lama Yeshe’s first Western students, was rich in many ways.

Jan, the author of Dreaming Me: Black, Baptist, and Buddhist, marched with Martin Luther King in her teens and incorporated citations from King’s speeches in her teachings on Je Tsongkhapa’s “Three Principal Aspects of the Path.”

Bringing the Buddha and King together in terms of their views on humanity’s interdependence, nonviolence, and speaking up for the disenfranchised, the poor, and the sick, Jan’s talks brought out the eternal themes of all religious leaders who practice deep compassion. Watch her teachings here and her Bodhisattva’s Breakfast Corner talk here. Photos are here.

Memorial Day Retreat: How to See Yourself as You Really Are 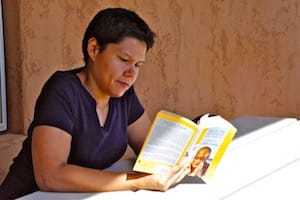 Following H.H. the Dalai Lama’s book How to See You Really Are, Ven. Chodron led nearly 45 retreatants through the complexities of things being empty yet existing and things existing in dependence on conceptuality yet not being findable under analysis.

Everyone was wide-awake as some of our basic assumptions about life and existence were being called into question.

These kind of teachings open the door into a new way of seeing ourselves and the world, one that is free of attachment, anger, and ignorance. The discussion groups in the afternoon and the Q&A sessions were similarly provocative. The videos are on the web here. Photos are here.

Prajna House
Residence for the Abbess 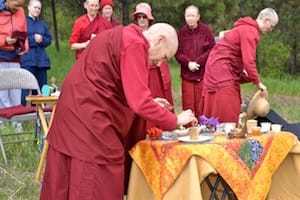 Construction for Prajna House, a residence for Abbess Thubten Chodron, ceremonially began with a land blessing. We first made offerings to the Three Jewels, and then acknowledged the beings with whom we share the land. The group dedicated prayers for their safety and welfare as well as for all the workers and everyone who will be touched by the building. Photos are here.

Actual ground-breaking for Prajna House is coming soon. Due to an especially wet spring here (we’re not complaining!), we’ve had to wait for the ground to dry out so the machinery can get in.

Meanwhile, a big ditch to connect the future Prajna House to the Abbey’s water and electrical system has been dug and pipes installed. After being approved by the inspector, the ditch will be filled. That’s when excavation of the site can begin.

An anonymous donor has offered to match Prajna House donations up to $100,000. We’re about 1/3 of the way there. Friends of Sravasti Abbey invites everyone to get in on the merit-making to help build the abbess’ residence. You can make your offering here. 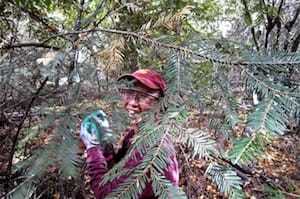 The Abbey continues our years-long project of making our forest healthy, primarily by clearing out dead brush and thinning areas with crowded trees. Carrying on from last year, we’ve scheduled a series of Offering Service Saturdays (June 3, July 15, August 19, September 9, October 7, November 4) to help us do this.

During the one on May 6, Dave and Ryan joined Vens. Semkye and Losang in cutting down larger trees as well as over-grown vine maple and willows.

As part of our regular offering time, Abbey residents cut down branches, stack wood, and haul out dead material to burn. We love this work; being out in nature is good for the body and the mind, especially for those of us who work a lot at an office job or with the computer. It’s wonderful to see the results of our work with our eyes that very day! 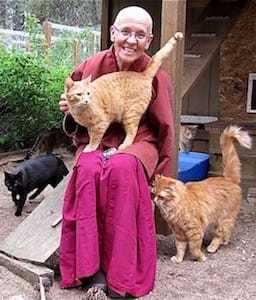 Practical Ethics and Profound Emptiness, Khensur Jampa Tegchok’s commentary on Nagarjuna’s Precious Garland of Advice for a King, edited by Ven. Chodron, is now available on Amazon and in bookstores.

And you can now pre-order Approaching the Buddhist Path, by H.H. the Dalai Lama and Thubten Chodron. This is the first volume of the Library of Wisdom and Compassion, His Holiness’ major English language series. It will be available in July.

Bill shares some words of wisdom that came to him in meditation:

Read how Tanya is working with her reactions to current events in “Letting Go,” and how Ken is cultivating equanimity toward some of the players of those events in “Equanimity.”

Ken also shares his reflections on how to address the world’s suffering in “A Meaningful Life.” Rebecca speaks of partiality and her wish to be free from it in “Hold Me Close.”