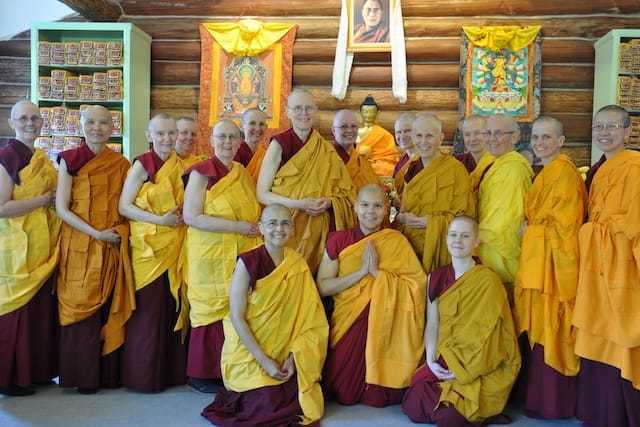 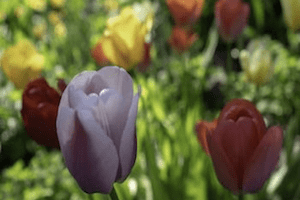 May has been an active month, with rain in early May bringing beautiful flowers later in the month. The tulips are spent, as are the lilacs—but how wonderful the lilac bushes smelled, especially in the evening! Various colored irises are blooming now, together with the peonies.

Ven. Tarpa is running a “Let’s Get Things Done!” week from June 15 to 23 and has rented a Genie ladder mechanical lift to reach the high places on Abbey buildings. Volunteers are signing up, and more are welcomed. We’ll need cooks as well as maintenance crews, so If you have time to join in the fun, please write our office! 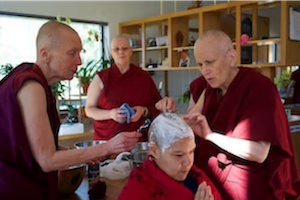 Christina Manriquez, who has been living and training at the Abbey for about two years, received the novice (sramaneri) and training (siksamana) ordinations and is now a nun!

All of us were delighted that her father came for the ordination, and about a dozen local supporters also attended. It was a happy occasion as we all chanted while the nuns shaved Christina’s head prior to the ordination, and everyone rejoiced to greet the new Venerable Thubten Kunga after the ceremony.

About the ordination, one of the novice nuns wrote, 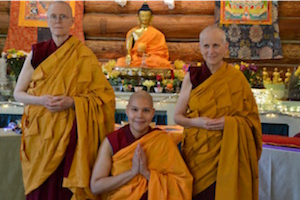 What has touched my heart deeply is the influence of just one person—intent on virtue, holding the precepts—on those around them. And then to witness the influence of a whole community living and practicing this way is just astounding. Ven. Kunga’s ordination was a wonderful example of this. To see the respect, love, joy, and inspiration our lay friends took from her dedication to the path was so moving. Through her, how many roots of virtue in the minds of others were created that day? At the same time, her aspirations could only come to fruition in dependence on the dedicated practice of many, many others.\

Ven. Jigme’s talk rejoicing in the new nun stopped me in my tracks when she said that on her deathbed, she will die peacefully knowing that a younger generation is coming up and will continue the work of rooting the Dharma in the West. With my little grasp of what that means right now, I feel that responsibility in my heart and it feels precious, rare, and so meaningful.

In the afternoon following the ordination, the community invited Ven. Thubten Chodron and visiting nun Ven. Sangye Khadro—both ordained for over 40 years—to tell stories from their early years. Watch their sharing here. 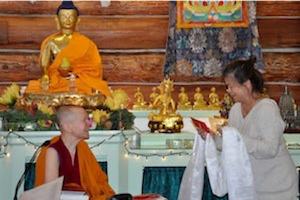 Ven. Sangye Khadro taught a lovely weekend course—Peaceful Living, Peaceful Dying—at the end of April. About 50 people, ranging in age from 19 to 80, shared the experience of recognizing that death is a natural and inevitable part of life and explored methods to prepare for it spiritually.

Ven. Khadro emphasized how a healthy awareness of death can help us stay focused on what is most important in life. She also stressed that it is possible to die with a positive, peaceful state of mind and introduced meditations and other practices to support that.

Retreatants young and old spoke of feeling uplifted by the course. You can watch the talks here and download a presentation that accompanies the teachings here. Photos are here.

For additional resources on preparing for death, download the PDF version of Ven. Sangye Khadro’s free distribution book,Preparing for Death and Helping the Dying: A Buddhist Perspective or browse the Sickness & Death teachings on ThubtenChodron.org.

How to See Yourself as You Really Are Retreat 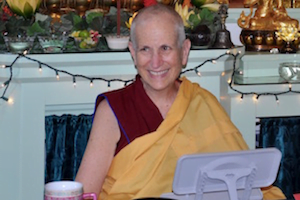 Over fifty people attended the Memorial Day retreat, How to See Yourself as You Really Are, based on the book by HH the Dalai Lama with that title.
Ven. Chodron had planned to finish the last section this year—the book has been the source of several years’ Memorial Day retreats—but instead went into great depth on how to cultivate great compassion.

The meditation sessions and discussion groups brought an experiential side to the teachings, giving everyone a taste of the freedom of an open heart and the beauty of a mind that cares about all others.

The weekend began with rain and ended with sunshine that nourished the newly watered trees. Many students who regularly attend Abbey retreats were here, enhancing the feeling of community, even though the retreat was held in silence. Videos are here and the photos are here. 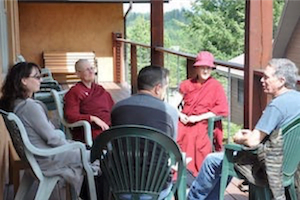 A good-sized group attended the May Sharing the Dharma Day. Beginning with meditation, the day continued with a Dharma talk by Ven. Chodron entitled “Beyond Blame.” Watch the talk here.

Ven. Chodron spoke about the futility of attributing all the blame to one person—either to our antagonist or to ourselves—when, in fact, everyone in a situation contributes some element.

Rather than generating hostility as we do when we blame, it’s more realistic to check: what is our responsibility? What is the others’ responsibility? Then we can correct our share of the responsibility. This is a practical step to improve the situation instead of attributing all the blame to one party, as if they or we were so powerful that we could make everything go wrong. That’s a bit ego-inflating, isn’t it?

After lunch, we discussed the talk in small groups. This personal sharing enables us to learn from one another and also to realize that we aren’t alone in our efforts to go beyond blame.

Out in the Community 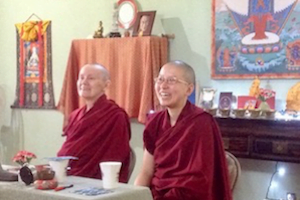 Vens. Samten and Damcho gave weekend teachings hosted by the Coeur D’Alene Dharma Friends, beginning with an evening talk on the Noble Eightfold Path, followed by a one-day workshop on the meaning of renunciation and how cultivating it actually brings contentment. The nuns delighted in delving into the Dharma with dedicated students who have been meeting weekly to do the Sravasti Abbey Friends Education (SAFE) program for years.

Ven. Chonyi gave a talk at the Gardenia Center’s Sunday morning service in Sandpoint, Idaho. She also joined Vens. Jampa and Damcho for a celebration at Geshe Thupten Phelgye’s Buddhist Institute of Universal Compassion Foundation in Spokane. Along with Geshe Phelgye, monks from the local Burmese and Vietnamese temples, and lay friends, the nuns joined in chants and prayers to welcome the new temple’s recently-arrived Buddha statues.

Also in Spokane, Abbey nuns continue the weekly on Ven. Chodron’s book Taming the Mind. Join them from 6:30 to 8 pm for stimulating discussions on the nature of mind. 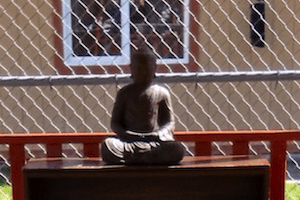 Ven. Chonyi joined Ven. Sangye Khadro, who’s visiting the Abbey this year, on a prison visit in Idaho. Their main mission was to meet a Dharma student whom Ven. Khadro has been guiding by mail for 11 years.

With Ven. Khadro’s help and the support of others, he studied the materials from Lama Tsongkhapa Institute’s six-year Buddhist Masters Program, and he shares his Dharma wisdom freely with fellow inmates. Ven. Chonyi was especially moved by this man’s joy in meeting his teacher—Ven. Sangye Khadro—for the first time and his gratitude for the Dharma.

The nuns also met with a group of self-identified “seekers” for a couple of hours, meditating together and discussing Dharma topics. Their exchange reaffirmed how powerfully the Buddha’s teachings can transform hearts and minds.

Ven. Chonyi shares more about the visit in this Bodhisattva’s Breakfast Corner talk. Ven Jigme reads an inspiring letter from an inmate who’s new to Buddhism in a related talk, which you can watch here.

In March, we hired a small crew of loggers to begin to clean up the forest land on the hill as you drive up to the Abbey. The area contained live trees and trees that were dead or dying due to the beetle infestation in the Northwest. The loggers weren’t able to complete the area, so we’re hoping they will continue this summer. In the meantime, we are cleaning up the debris and thinning some of the areas that their large equipment could not reach.

Ven. Nyima and others have planted the veggie garden, and Ven. Yeshe has planted multiple pots with various herbs and others with cherry tomatoes. The weather was warm when the fruit trees blossomed, so we’re hoping for plentiful fruit this year.

For our first Offering Service Saturday in May, we got all dressed up in work clothes and split into different teams. This is a time when guests and monastics bond by working together and chatting while we do so. Some people worked in the veggie garden, others helped to plant trees. Some of us worked in the forest, and others in the meadow. Everyone had a good time. For those of us who work on the computer a lot, it was especially refreshing to see the difference our work makes with our own eyes.
If you like working outdoors, please come and join us in the gardens and forests! Our next Offering Service Saturday is on June 15. 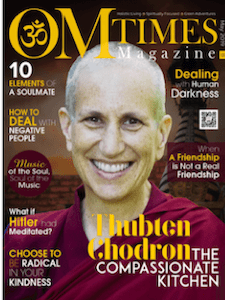 Shambhala Publications will soon release a new book by Ven. Chodron: Awaken Every Day: 365 Buddhist Reflections to Invite Mindfulness and Joy. It’s a collection of pithy teachings, one for every day of the year. Available for pre-order now, the book will be in stores beginning June 18. Shambhala is offering a 30% discount for online orders until July 31. Learn more about the book and get the discount code here.

Doboom Rinpoche, the former director of Tibet House in Delhi, recently gave the keynote address at a conference at India International Centre. In his concluding remarks, he mentioned Buddhism: One Teacher, Many Traditions. Listen to his talk here.

Om Times and their radio show “What is Going Om?” interviewed Ven. Chodron about her book The Compassionate Kitchen and put her photo on the cover of their magazine. Read the interview here.
Christine Racine writes about how she’s improving her meditation skills in “Tea with a Buddha.” Read her essay here.

Kuni, one of our longtime supporters and a great cook—you may have eaten her Thai food at one of the Abbey retreats—has just opened a restaurant in Spokane, called Kuni’s Thai Cuisine. She invited the entire Abbey community to bless the restaurant. After we chanted and expressed our good wishes and prayers for everyone who works and dines there, she offered us a pre-opening meal. We can recommend the delicious food there without any hesitation!