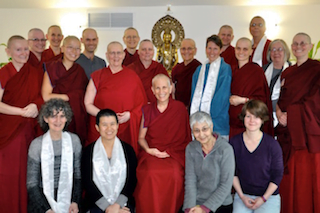 The days are slowly getting longer and winter is lightening up. After some lovely snowfalls at the beginning of the month, the weather warmed and the snow began to melt. The silence of winter retreat continues, and we are grateful to have the time to deepen our trust in the Three Jewels. 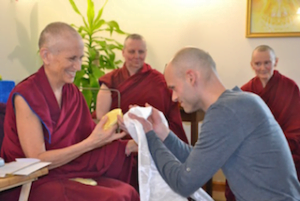 The retreat this year went very smoothly. Everyone settled into the practice quickly and remained focused throughout the month. The group was very harmonious, and we didn’t need to remind anyone about keeping silence, which is remarkable! At the conclusion of the retreat we also did the ceremony of generating bodhicitta and taking the bodhisattva vow. Heather gave a Bodhisattva’s Breakfast Corner talk about her retreat experience.

In retreat every day is pretty similar to the previous one, although our minds change constantly. The schedule contains five daily meditation sessions and one session for study. During the break times we read, listen to and watch Dharma talks in the Abbey’s archives; take walks, rest, cook, clean, and do the various jobs that keep the Abbey going. Heather and Rebecca also offered water bowls during the breaks, increasing the peaceful atmosphere in the Kuan Yin room. See photos of our time during retreat.

Over 275 people are participating in the Retreat from Afar. More than 100 of them are in prison, where they do the practice daily, even in the extreme conditions there. All of the Retreatants from Afar are in our hearts, and we have photos of them on the wall. We rejoice in their practice and feel their moral support as we send ours to them.

The resident community and three people who are thinking about joining the Abbey will continue with retreat until April 1. We welcome you to join us for Sharing the Dharma Day and our end-of-retreat celebration on April 3.

The refuge practice is inspiring lots of creativity. Rebecca wrote a poem “In Praise of Trinley” at the end of the one-month retreat. “Trinley” is the Buddha’s awakening influence.

Stephen also wrote a poem during retreat that we’d like to share with you, “Faith and Gratitude.”

And Al, who’s doing the Retreat from Afar from prison, also sent a refuge-inspired poem, Harmony.

Every year we do a puja on Chinese/Tibetan New Year at the request of our Singaporean friends.

This year we did a Tara Puja, Tara being a female manifestation of the buddhas. Doing her puja lightens our minds and energizes us to practice. The altar was so beautifully arranged, we felt like we were stepping into Tara’s pure land.

At the conclusion of the puja we read aloud the names of all those who asked us to pray for them. The sound of all those names—20 pages of them!—murmured by retreatants as we dedicate our merit, is almost musical. The ceremony brings the Abbey community a feeling of closeness with our Singaporean friends and benefactors, and we wish them and everyone a peaceful new year. Photos are here.

Dusk at the Abbey is quite a sight as the turkeys go to roost for the night up in the large trees. They fly from branch to branch and from tree to tree until each one finds their place, and the sound of their wings flapping breaks the silence.

Meanwhile, on the ground are the deer coming for their evening treat of alfalfa, graciously provided by Venerable Semkye. Word has gotten around the ‘hood that the eatin’ is good at the Abbey so now at least eleven deer gather plus lots of turkeys.

In addition, a new cat turned up at Tara’s Refuge (the new land down the hill). He’s an adorable Siamese that we named Upekkha (equanimity) to go with our other three cats Maitri (love), Karuna, (compassion), and Mudhita (joy), thus completing the four immeasurables. Abbey life and end-of-retreat photos are here.

We enjoyed a delightful deviation in our retreat schedule when Roger Jackson visited to teach on Gelug Mahāmudrā, literally the “Great Seal.”

A Buddhist scholar, author, and Tibetan translator, Roger usually spends his winters at Carleton College in Minnesota, where he is a professor of religion. This winter, however, he is guest teaching at Maitripa College in Portland, OR, which is not so far from the Abbey. He are happy he was able to spend a weekend sharing his fascination with Mahāmudrā.

Combining an academic’s approach with a poet’s fervor and a practitioner’s guidance, Roger offered a shower of learning in two jam-packed days of formal teachings and informal discussions. We learned much about Buddhist history in India and Tibet, heard about some of Tibet’s great yogis, and developed an appreciation for the First Panchen Lama’s presentation of Mahāmudrā meditation. It was a stimulating course, and we are glad to now go back into retreat to think about and even try out what we learned.

You can watch the teachings here. Photos are here.

If you’d like to hear the talk that HH the Dalai Lama gave specifically to the Westerners during the lamrim teachings last December, you can listen here.

Tricycle published an interview with Venerable Chodron about monastic life and the Western Buddhist Monastic Gathering on their blog. Find it here.

The Abbey was selected as one of the 30 most peaceful monasteries in America. Take a look!

Amazon shoppers take note! You can register the Abbey with the AmazonSmile program and a percentage of your purchases goes to support the Abbey. Check it out on their About AmazonSmile page.

Here’s a thoughtful video about our lives from a secular perspective and a Religion & Ethics NewsWeekly video featuring Venerable Barry Kerzin, a friend of Venerable Chodron’s, who is a medical doctor and a Buddhist monk in Dharamsala.

The next 12-week session of the Sravasti Abbey Friends Education distance learning program begins May 2. Read about the program and email the coordinator to register.