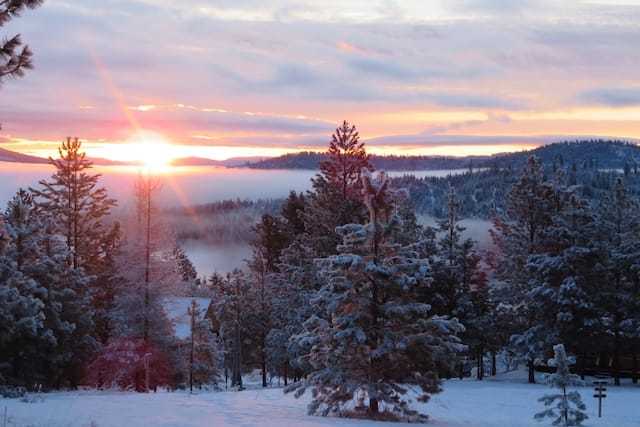 After about two weeks of snow in mid-January, it began to melt. We’ve had a few short snowfalls since then and there are still white patches on the ground, but we’ve been having March weather in February. Global warming for sure.

The turkeys have returned, though not as many as last year, and the deer are very tame and sweet. We see footprints of bobcats and moose. While we treasure bright sunny spring days in the middle of winter, we simultaneously hope for more snow.

It’s always difficult to write the enews for these months of retreat because, externally, nothing much new is happening. Every day is pretty much the same: We awake, generate a bodhicitta motivation, meditate, eat breakfast, meditate, eat lunch and clean-up, take a break, meditate, have medicine meal, meditate, dedicate the merit, and sleep.

We continue with our monthly group practices: Lama Chopa Puja on the lunar 10th and 25th, Tara Puja on the lunar 8th, and posadha (purification and restoration of precepts) on the lunar 15th and 25th. February 24 was Losar—Tibetan New Year—and we did the meditation on the Inseparability of the Spiritual Master and Avalokiteshvara to celebrate. Jason Chan from Singapore and Kuni’s Thai Cuisine in Spokane kindly sponsored a delicious Losar lunch for the community.

Another remembrance that comes easily during retreat time is the kindness of all of you who support our spiritual practice in so many ways, from helping to pay the heating bill to offering the food we eat; from purchasing snow shovels and a snow plow to providing generators for when the electricity goes out. Without your kindness the Abbey wouldn’t exist, and without the Abbey and other monasteries and centers, none of us would have access to the Buddha’s liberating teachings.

One area of activity that keeps going during winter retreat is preparing for our future Buddha Hall. Our architect, Tim Wilson of Momentum Architecture, has finished the preliminary plans, which you can see here.

We’ve signed contracts with the acousticians, structural engineer, civil engineer, and electrical engineer, with more engineering in the works.

All these people are working together to plan the infrastructure and other necessities before construction can even begin. They’re outlining what needs to be done for site preparation (felling some trees and leveling the ground) and all the infrastructure that building in rural areas requires.

Buildings constructed in cities can tap into the municipal sewage system, electrical grid, Internet, water systems, and so on. In rural areas, such as where the Abbey is located, we have to plan and build all these ourselves.

We’ve also been in touch with two wonderful sculptors who will make the large Buddha statue and the slightly smaller statues of Ananda and Mahaprajapati Gotami for our main altar. And we’ve contacted artisans in Nepal who will make the Dharma wheel and two deer that will go above the main entrance and the gajurs (pinnacle roof ornaments or spires) that will go on top of the building.

We’re now interviewing general contractors, which has been an interesting learning process for us. Some of the nuns have been out reviewing the candidates’ work.

There’s a big difference between working with smaller construction companies, like we did when building Gotami House and Chenrezig Hall, and now working with commercial construction companies, as required for this much larger building. We’ve met some very talented, knowledgeable, and well-organized people and are confident that whomever we select as our builder will do a good job.

One area where we are looking for advice is lighting, especially for the altars and meditation rooms. If you have experience in lighting design and would like to help us, please contact Ven. Samten at the Abbey’s office.

At present, we’re hoping to do the site preparation this year and to start construction in the spring or early summer of 2021.

We’re inviting everyone’s generosity for this inspiring project that will contribute to establishing the monastic sangha and the Buddha’s teachings in the West. If you are thinking about a significant offering, please write Ven. Chonyi to discuss.

You can also help by joining the effort to amass 3 million recitations of Shakyamuni Buddha’s mantra by May 7 to remove any obstacles. Details are here.

Ven. Jampa joined in a three-week pilgrimage to South India organized by the Tibetan Center Hamburg, Germany. A group of 22 participants—five monastics and 17 lay practitioners—visited some of the famous Buddhist caves such as Ellora and Ajanta near where monastic communities flourished from the 2nd to the 11th centuries. The pilgrims performed prayers and meditation in the caves.

At one cave, they were surprised and delighted to meet the Buddhist nun and teacher Jetsunma Tenzin Palmo, who is on the Abbey’s advisory board and an old friend of Ven. Thubten Chodron.

The pilgrims then traveled further south to visit the Tibetan monastic universities of Sera, Ganden, and Drepung, as well as Jangchub Choeling Nunnery. These monasteries once flourished in old Tibet, but after the Chinese invasion in 1959, most were destroyed. Now they have been rebuilt in India where monks and nuns can continue to study and preserve the Buddhadharma.

The pilgrims took the opportunity to perform pujas and prayers in all those monasteries and to connect with Tibetan communities and their teachers. Sravasti Abbey has a close relationship with Jangchub Choeling Nunnery and some of the Tibetan nuns have visited the Abbey.

After the pilgrimage, Ven. Jampa returned to Germany where she was invited to give several talks and lead meditations. First she traveled to her hometown, Berlin, where she spoke at the MEEET Center about “Women, Buddha, and Mind Power.” At the Tibetan Center in Hamburg, she gave a talk on “Buddhism and the Environment” and an evening presentation on “Monastic Life.” She also led guided meditations over several evenings, many of which focused on environmental awareness.

Ven. Jampa expressed her gratitude and joy for the opportunity to attend the pilgrimage to India and to share the Dharma in Germany. She wrote during her stay in Germany, “I am grateful to have this opportunity, to share, to learn, to train. I am grateful for the support I receive to continue growing on the path to benefit others most effectively.” After about six weeks of traveling, she is also happy to be back at the Abbey where she will continue to study, meditate, and apply the Dharma in daily life.

See photos of her pilgrimage here.

Ven. Sangye Khadro has returned after five months of teaching in Spain, Portugal, Israel, and the US. We’re delighted to have her back at the Abbey.

Laressa, who took anagarika ordination, is living at the Abbey. She’s using her refuge name, Dekyi, and is joyfully participating in meditation, teachings, and community life.

Ven. Losang is healing from some health issues in Centralia, Washington, where he is also doing retreat and working on the prostration ngondro.

Ven. Lobsang Donyo, an American monk who lives at Sera Jey Monastery in India, is staying at the Abbey for a few weeks to do retreat.

Buddhism: One Teacher, Many Traditions, co-written by His Holiness the Dalai Lama and Ven. Chodron, has been published in Russian! Russian readers can get the print, ebook, or audio book version here.

Geshe Dadul Namgyal, who teaches at the Abbey every year, was interviewed for the New York Times on “How Does a Buddhist Monk Face Death?” Read the article here.

Enjoy these Dharma insights published on the Sravasti Abbey website:

We are watching the spread of the coronavirus carefully and will respond with schedule changes if necessary as indicated.