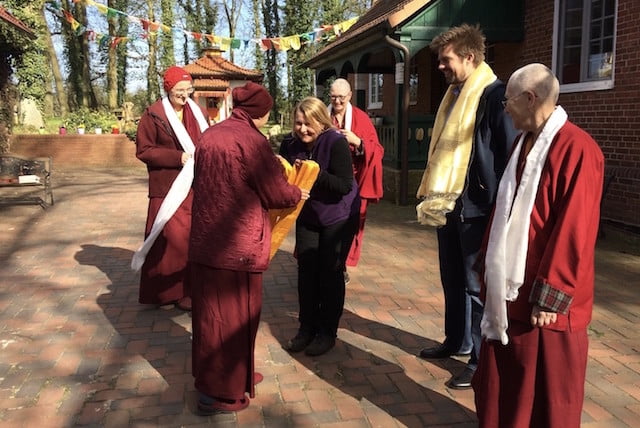 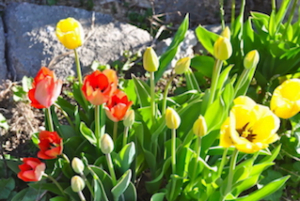 April has brought its share of showers along with some days that were more like July and others that were more like March. We even had an unseasonable thunder, lightning, wind, hail, and rain storm that nearly drowned out the Friday night teaching during the Sharing Your Joy Retreat. Whether it’s the winds of El Nino or the winds of karma, the weather and our lives are constantly changing.

The Abbey is wearing her spring clothes again, as the gardens are blooming. With a wonderful schedule of retreats and teachings coming up, please join us if you can.

After a meditation session, Venerable Chodron gave the day’s teaching from the “Thirty-seven Practices of Bodhisattvas:”

If through the influence of disturbing emotions
You point out the faults of another bodhisattva,
You yourself are diminished, so don’t mention the faults
Of those who have entered the Great Vehicle—
This is the practice of bodhisattvas.

Since we don’t know who is a bodhisattva and who isn’t, this verse reminds us to be careful when the urge arises to criticize anyone. Restraining our judgmental, critical mind and speech doesn’t mean we avoid difficulties and ignore harm. Rather, it challenges us to subdue our own anger and then deal with problems in a clear way. Watch the talk here.

After a delicious potluck lunch, all of us did Lama Tsongkhapa Guru Yoga and tsog, making offerings to the Three Jewels in appreciation for the opportunity to do retreat. Then the Abbey gave gifts to those who took care of many of the practical aspects that enabled us to do retreat—our friends who offered food each week, picked up our recycling and garbage, did various errands, managed the website, and helped with transportation. We also rejoiced in the merit created by over 250 people who did the Retreat from Afar. Nearly half of them were prison inmates, who meditate under difficult conditions. The warm spring weather mirrored our warm hearts.

Venerable Chodron in Michigan and Europe

Guy Newland, who has taught Madhyamaka philosophy at the Abbey several times, invited Venerable Chodron to speak at Central Michigan University, where he is a professor. She gave two public talks, both of which are online: one on Transforming the Mind with Compassion, and another on Life as a Western Buddhist Nun. She taught in two university classes as well. Her talks were well received by both faculty and students, as shown by large turnouts, especially for the talk on being a Buddhist nun. Listen to her interview on the university radio station.

From Michigan, Venerable Chodron headed across the Atlantic to begin a five-week teaching tour in Europe. She began in Valencia and Alicante, Spain, where she taught the Dharma for a week at the Nagarjuna centers there and enjoyed spending time withoa longtime friend, Venerable. Paloma. Caz Lockwood, who visited the Abbey last year, is Venerable Chodron’s assistant during the tour. Photos from Valencia are here and Alicante are here. The Nagarjuna Center teachings with Spanish translation are on a play list of videos of the spring teachings.

The talks at Tibet House in Frankfurt, Germany, centered around Venerable Chodron and Dr. Russell Kolts’ book, Living with an Open Heart. The audience was open and interested, asking good questions that sparked lively discussions, which continued after the weekend seminar. Dagyab Rinpoche is the center’s principal teacher, and Venerable Chodron was happy to meet many of his students again. Photos of the teachings in Germany are here.

Hamburg, Germany was the next stop with a public talk in the city on life as Western Buddhist nun (audio is here), then a four-day retreat on Nagarjuna’s Precious Garland at Tibetan Center Hamburg’s retreat place in the countryside, Semkye Ling. Here, too, students delved into the teachings, exploring Buddhist ideas of rebirth and karma, and applying the teachings on ethical conduct to their own lives. Over twenty people took refuge and lay precepts at the conclusion of the retreat. (Listen to Tibetan Center Hamburg Magazine’s interview.)

Venerable Chodron and Caz then took the train to Arhus, Denmark, where she gave two talks  in a packed room. Here, as elsewhere, people said that it felt like she was speaking directly to them in describing how their minds worked, getting them to laugh at themselves, and encouraging them to apply the antidotes to the mental afflictions.

In all these places, Venerable Chodron was able to meet with many old Dharma friends whom she hadn’t seen in years; this brought her much happiness as she rejoiced at all they were doing to benefit society in so many different areas. While at Semkye Ling, she also visited nearby Shide Nunnery, recently founded by nuns in the Tibetan tradition, and did the fortnightly posadha ceremony with them to purify and restore precepts.

They are in Copenhagen now and then go on to Russia. You’ll hear about that part of the trip next month. You can see continuous updates about Venerable Chodron’s teaching tour on her Facebook page.

Abbey monastics completed our third varsa with the pravarana, the ceremony to invite feedback. A sense of community harmony pervades the experience as we enact ancient rites and rejoice in holding monastic precepts.

The Buddha himself established the varsa—the annual three-month retreat—to support monks and nuns to stay put during India’s monsoon season, using the time to deepen their practice. We don’t have monsoon rains in North America, but we do have winter snows in Eastern Washington where the Abbey is located. The vinaya—the monastic code—also makes provision for a winter varsa, which we follow. Although the varsa usually overlaps with our annual winter meditation retreat, they are not the same thing.

During varsa, in addition to studying the Dharma, we focus on community harmony. The pravarana ceremony marks the end of varsa, when we do confession, clean up and clear up any unspoken issues between us, and ceremonially “invite the pravarana,” opening ourselves for feedback about our behavior. The beautiful ceremonies include chanting and recitations, and we all feel especially cleansed afterwards. Photos are here.

Pravarana is followed by the kathina, another ancient rite where, traditionally, the lay community offers robes and goods to replenish the sangha’s supplies after the 3-month varsa. The Abbey’s third annual Kathina Celebration is Sunday May 15 in conjunction with Sharing the Dharma Day.

The Abbey now has ten fully ordained nuns! We rejoice in the return of Venerables Jampa and Damcho who traveled to Taiwan for ordination and training.

They first stopped in Taipei, staying at the Pu Yi Nunnery and visiting Dharma Drum Mountain, one of the four major temples of Taiwan. They also visited with Venerable Minjia, who has served as the acharya for most of the Abbey’s novice and shikshamana ordinations.

At Miao Fa Buddhist Temple in the south of Taiwan, the Abbey nuns joined 150 nuns and 80 monks for the triple platform ordination and 45 days of training. The full schedule ran 4:30 a.m. to 9:30 p.m. daily, including morning and evening chanting and bowing, teachings on the precepts and monastic deportment, and rehearsals of the ordination rituals. Adapting to a different Buddhist tradition was at times overwhelming, but both nuns did their best and even received prizes at the end of the program for their efforts in memorization and folding their bedding neatly!

Venerables Jampa and Damcho were inspired by the experience of living and practicing with a large sangha community and moved by the generous support of the Taiwanese lay Buddhist community. They continue to digest their rich experiences and will do their best to repay the kindness of their teachers and all sentient beings. Both nuns gave Bodhisattva’s Breakfast Corner talks on this. Venerable Jampa shares her experience here and here, and Venerable Damcho’s talks are here and here.

Twenty-five people met for the Sharing Your Joy Retreat, which began on Friday with Venerable Semkye’s rousing teaching on death and impermanence, punctuated by the rattle and roar of thunder, lightning, and hail! This set the tone for exploring the topic of joy.

On Saturday we took a retreat field trip. Everyone headed into Newport to join the annual Child Abuse Awareness Walk, which the Abbey co-sponsored. Venerable Semkye gave instructions on how to use the walk as a meditation, cultivating compassion and sharing our joy out in the community. The townspeople shared their happiness at seeing our monastic robes in the crowd.

In the afternoon, Venerable Tarpa relied on ancient Indian master Vasubandhu and her own experience to give a clear and thoughtful talk on the four immeasurable thoughts, emphasizing sympathetic joy. Venerable Semkye followed up the next day with a teaching and personal sharing on cultivating joyous effort to overcome the three types of laziness: indolence, worldly busy-ness, and discouragement. Both talks are on video here. Other monastics led meditations and prepared the meals, making it a joyful and harmonious community-led event with new and old friends.

Out in the Community

As soon as the winter retreat ended, Abbey monastics returned to sharing the Dharma with the greater community.

In Venerable Chodron’s absence, Venerable Chonyi gave the annual spring talk to about 170 people at North Idaho College (NIC) in Coeur d’Alene, ID. The talk, “The Qualities of a Rich Life,” addressed issues of spiritual poverty and elicited good questions and discussion from the audience. Video is here. Venerables Semkye and Samten returned to NIC the next day to speak in the World Religions class.

Venerable Chonyi also traveled to Portland to share the Dharma with the Buddhist group at Lewis and Clark College and fielded questions in a class on Women In Buddhism.

Meditation classes at the Unitarian Universalist Church in Spokane have continued through the winter under the able guidance of Jim, Tracy, and others, but there was obvious excitement about the nuns returning to teach. About 60 people attended the first April class and the next week saw a record-breaking 70-plus. The class is studying An Open-Hearted Life, co-written by Dr. Russell Kolts and Venerable Chodron.

“Buddhism in the 21st Century” was the theme of the last session of Venerable Chodron and Bhante Seelawimala’s seminar on Buddhism: One Teacher, Many Traditions at Maitripa College last month. Watch it here. Maitripa College hopes to edit the first four sessions and put them on the web over the summer.

See what Venerable Chodron’s friend who is a retired Buddhist prison chaplain is doing to help inmates who have been released. It’s delicious!

One of our Dharma friends and environmental activist, Zhiwa Woodbury, wrote a great article on climate change, “The Talking Cure for the Climate Crisis.”