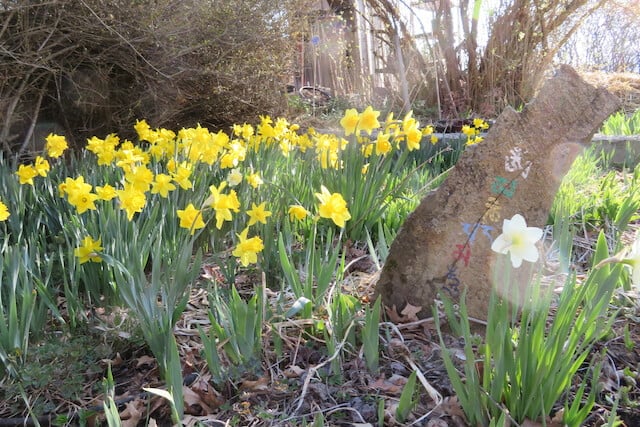 As the weather warms up and our garden begins to bloom, the Abbey bustles with activity outdoors, indoors, and online with our programs back in full swing.

The community spent a full day doing spring cleaning and still didn’t complete all there was to do. However, we did re-organize several storage areas and closets, which reaped many large bags of extra shoes, clothing, blankets, and other useful items that we donated to our local Youth Emergency Services and Goodwill charities.

Many of the monastics also donated their stimulus check funds to a variety of charities. Giving and sharing our fortune brings happiness to our minds and to others!

See photos of Abbey life in Spring here and of our Spring activities here.

The principal topic was the Buddha’s first teaching on the four truths of the aryas, which forms the framework for the entire path to liberation and full awakening that he subsequently set forth.

Each of the four truths has four aspects that overcome four distorted conceptions regarding that truth. Studying these brings to light and then dispels our many misconceptions—such as seeing what is impermanent as permanent, what is suffering as pleasure, what is foul as beautiful, and what lacks a self as having one.

All of the discussion group facilitators said the participants’ comments were thoughtful and that people really took the teachings to heart. See photos here.

Ven. Chodron continued teaching on the book in two weekend talks on the same title, requested by Vajrayana Institute in Sydney, Australia. These talks centered around impermanence, duhkha, emptiness, and selflessness. Ven. Chodron also spoke of our human potential to overcome samsara and attain not only liberation from samsara but also buddhahood, a state in which we can most effectively benefit self and others.

Ven. Chodron’s commentary on Samsara, Nirvana, and Buddha Nature will be posted in sequence here on our YouTube Channel. Tune in live as she continues to give weekly teachings on the book on Fridays at 6:15 pm Pacific Time on Vimeo Livestream here.

A “central land” is a place where there is a sangha of either four or more bhikshunis or four or more bhikshus, who perform the three principal monastic activities in addition to giving ordination—the fortnightly confession and restoration of precepts (posadha), the rains retreat (varsa), and the invitation for feedback (pravarana). Living in a central land is one of the conditions to have a precious human life, one that has all the freedom and fortune to learn, contemplate, and meditate on the Dharma.

For many years now, the bhikshuni sangha at Sravasti Abbey has done these three practices. We just completed the annual rains retreat that we do in the winter as a “snows retreat,” which concludes with the invitation for feedback. Because harmony is stressed during the varsa, we don’t give one another feedback during that time.

Before the pravarana, everyone has a chance to confess and apologize to the group and to request any wise counsel the group would like to give. This takes several hours, and is then followed by the formal pravarana ceremony. After the ceremony, everyone feels very happy, not only because the sangha is harmonious, but also because we have succeeded in making this a central land. See photos here.

The day after the pravarana, the sangha is supposed to go on an outing outside the monastery. Due to Covid, we took a walk around some nearby land and returned to the Abbey for a pizza lunch. In the afternoon, the community watched a documentary on how women got the vote. Those ladies were strong and determined, and we have opportunities now because of the efforts they made. The day began and concluded with our usual meditation sessions, and the next day we returned to our usual schedule.

At the Buddha’s time, monastics’ robes were torn, wet, and smelled of mildew after the rains retreat, so the Buddha established the tradition of lay followers offering new robes and other necessities to the sangha after the pravarana.

The “kathina” is the robe of merit offered to a monastic whose precepts are pure, and the ceremony is named after this robe. This year the Ong family from Malaysia and Friends of Sravasti Abbey Singapore offered the kathina robe over Zoom—the first time we’ve ever done the ceremony like this!

The Zoom call also enabled Abbey monastics to thank all our international supporters and especially our local American friends who went shopping and offered food to us during winter retreat. We are so grateful as well to all the volunteers who serve the Abbey from home by editing audio and video teachings, updating our web platforms, proofreading written materials, and so much more. Without all of your help, we wouldn’t be able to propagate the Dharma widely or have time to do our study and meditation practice.

Watch the celebration that was also livestreamed on YouTube here.

Sravasti Abbey nuns have received multiple requests from both domestic and international Buddhist groups and secular schools to give talks and courses or to lead retreats.

Ven. Samten met online with a student at Hamline University in Minnesota to answer questions for a paper she is writing on Buddhism. The conversation flowed easily between them given that both Sravasti Abbey and Hamline University value diversity; everyone is welcome and everyone has the capacity to learn and eventually make valuable contributions to benefit all!

Ven. Damcho participated in an online class on “Buddhist Meditation and Practice” at Gonzaga University. She responded to students’ questions on how Sravasti Abbey has been helping people through the dual pandemics of Covid and racism, her experience as a woman in the Buddhist community, and the changes in her lifestyle and goals after ordination. The opportunity to connect with curious college students is always delightful, and we look forward to the time they can visit the Abbey in person again.

Our monthly Sharing the Dharma Days started up again on the first Sunday in April. Ven. Khadro led a meditation on compassion in action, which you can watch here.

Ven. Chodron continued teaching from the book An Open-Hearted Life, which she co-authored with psychologist Dr. Russell Kolts. Based on the chapter “Reaching Out with Compassion,” she discussed how to counteract our “pity parties” in which we are sucked into the vortex of feeling sorry for ourselves and blaming others for our misery. Flipping the object of our attention to consider the lives, situations, and feelings of others pulls us out of our self-centered misery as we connect with others and see that we can contribute to their happiness and well-being. Watch the talk here.

The Zoom discussion group that followed in the afternoon expanded on this theme. Sharing in this way is a form of reaching out to others with compassion and lets everyone feel understood while also hearing and supporting others.

Join us for our next Sharing the Dharma Day on May 16. Learn more about it here.

Together, We’ll Build the Buddha Hall

The Buddha Hall committee completed the architectural and engineering plans and have met with our contractor, John Young, and architect, Tim Wilson, to go over them in detail. Now John will put together a final estimate and we’ll apply for building permits.

Meanwhile, the Buddha Hall Jumpstart Challenge is well on its way. As of April 30, generous donors have contributed over one-third of the $250,000 challenge goal! July 14 is the deadline. See Ron’s delightful video about how “Together, We’ll Build the Buddha Hall” and add your support.

In addition, dozens of meditators participated in the Mantra Marathon on April 3. In six group sessions held over Zoom, we shared in the Shakyamuni Buddha meditation practice, accumulating over 70,000 recitations of the Buddha’s mantra in one day. Go here to join in.

Ven. Jampa participated in an Earth Day “Virtual Vigil for the Healing of the Earth,” organized by Faith Leaders and Leaders of Conscience of Eastern Washington and North Idaho. Her talk encouraged the audience to stay centered in their spiritual refuge when faced with adversities while advocating for environmental action.

Participants listened to local communities, especially the Spokane Tribe, share how they have been affected by ecological devastation, and learned new ways to engage in environmental protection. Watch the recording here.

Ven. Chodron recorded a talk for the Italian Buddhist Union and for a Buddhist Earth Day celebration in Russia. Watch Ven. Chodron’s Earth Day message here. A recording with Russian subtitles is here.

The Abbey began to do three-month winter meditation retreats in 2004-05, a year after we moved in.

The idea was born then to have a Retreat from Afar so that people who were unable to do the full retreat with us at the Abbey could join us by doing one session every day and studying the teachings that were given here. And since Ven. Chodron was corresponding with many people in prison, we opened the retreat to them as well; they took full advantage of the opportunity.

This year approximately 427 joined the Retreat from Afar; 170 of them did the retreat in prison, where conditions are far from ideal. We rejoice at the wonderful merit that all of you created!

Sixty people signed in for the April Medicine Buddha puja online. This last month seems to have been particularly filled with violence, making the puja yet another sober but hopeful Dharma sharing.

Participants requested prayers for the victims of mass shootings and policing as well as for their friends, family members, and the three million-plus who have died of Covid worldwide.

Our next online Medicine Buddha puja is May 23. Learn more and register here.

After a four-month hiatus for winter retreat, Ven. Semkye rejoined the local Newport Interfaith Group that meets every month on Zoom. The group has been reading The Book of Joy by His Holiness the Dalai Lama and Archbishop Desmond Tutu and sharing their insights.

As the group reads chapters on difficult emotions such as fear, despair and loneliness, Ven. Semkye has been inspired by their receptivity to Buddhist views such as how our minds are the source of happiness and pain, and the powerful taking and giving meditation practice (tonglen).