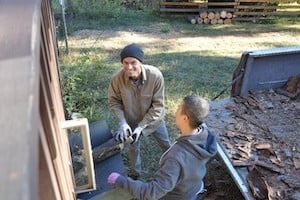 It’s definitely autumn now, with a beautiful spread of yellow, orange, and red leaves among the evergreens. The tamaracks are turning yellow now, too, which is really gorgeous. There is more rain than usual, which is very welcome, and the days are growing shorter.

Meanwhile, we’re filling the furnace room in Ananda Hall with wood for winter heating, and bringing the last of the bucked up wood to the landing where it can dry for a year before being used to heat Ananda Hall next winter.

Take a look at the photos of autumn activities.

To every U.S. citizen: please vote. It’s important. If you’re in doubt, please read this 2012 article to see how voting is a way to contribute to the welfare of society. 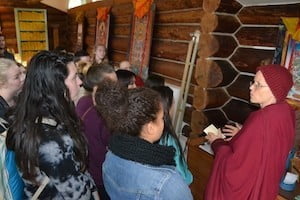 We welcomed about 60 high school students from Sandpoint to the Abbey. This was a field trip designed by their teacher to introduce them to Tibet and its culture.

Ven. Chodron gave two talks, and in between, they broke into groups with individual monastics taking them on a tour of the Abbey.

The small groups provided a lot of time for the students to ask questions, and having lunch together gave time for more discussion. We love having young people visit the Abbey and were invigorated by their interest and enthusiasm. 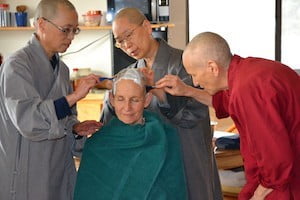 We happily welcomed Ven. Tenzin Tsepal as a Sravasti Abbey monastic, bringing us to 12 monastics.

Ven. Tsepal studied with Ven. Chodron at Dharma Friendship Foundation in the 1990s. She ordained as a sramanerika with HH the Dalai Lama in 2001, and then lived and studied with Geshe Tashi Tsering at Chenrezig Nuns’ Community in Australia for 14 years.

In the Local Community 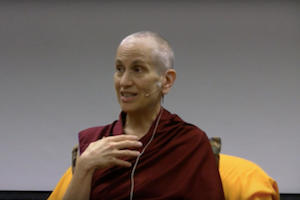 Ven. Chodron gave the Sunday morning talk at Gardenia Center in Sandpoint ID, speaking about the importance of respecting all living beings. This was a welcome topic in light of the national discussion about respecting women as well as people of all religions and nationalities. Watch it here.

The following week, Ven. Chodron spoke at North Idaho College (NIC) on “Who Am I Really? Letting Go of Identities and Healing Prejudices,” organized by the Coeur d’Alene Dharma Friends. Read the newspaper article about her talk and watch the talk.

The day after Ven. Chodron’s talk, Ven. Chonyi and Ven. Damcho visited a World Religions class at NIC. Dr. Laura Templeman invites Abbey monastics into her classroom each year to take questions on Buddhism and life as a monastic. The questions are always engaging and thought-provoking. This year, many asked about working with anger.

Ven. Tarpa and Ven. Chonyi gave a public talk and one-day workshop on “Making Karma Work for You” at Coeur d’Alene Dharma Friends. The talk was well-attended with people genuinely curious to explore how our actions relate to our experience of happiness and suffering. Saturday’s workshop sprang off from the CdA group’s study on the Karma course through the Sravasti Abbey Friends Education (SAFE) program. There was lots of thoughtful discussion. A Vajrasattva meditation session rounded out the day.

Ven. Samten and Ven. Jigme continue the weekly meditation course at the Spokane Unitarian Universalist Church, which will run into December. 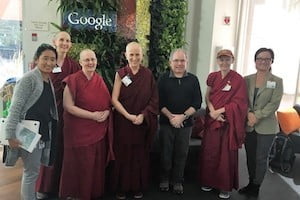 Ven. Tsepal taught a weekend course on overcoming anger and cultivating fortitude at the Osel Shenphen Ling Center in Missoula, MT. Ven. Damcho, Stephen, and Alicia accompanied her, and all of them commented on the warmth and hospitality of the people there.

Later in the month, Ven. Tsepal spoke at Dharma Friendship Foundation in Seattle on “Compassion and Bodhicitta: Essential Ingredients for a Peaceful World.” She also attended a conference on “Future of Dharma in America: Stress Reduction or Awakening?” organized by the Global Peace Initiative of Women, a national reflection with meditation teachers of different faiths. She shares about the conference here.

Ven. Chodron gave a talk at the Googleplex in the Silicon Valley. It was a lunchtime talk, so only 30 people attended it live while 120 Google employees watched online! Many techies are interested in mindfulness meditation. Ven. Chodron commended them on using mindfulness to understand themselves better, but emphasized that to be truly beneficial, mindfulness must be supported by ethical conduct and compassion for all beings. People listened attentively and took it all in.

Ven. Chodron spoke on “Good Karma: How to Create the Causes for Happiness and Avoid the Causes of Suffering” at Land of Medicine Buddha in Soquel, CA. The audience enjoyed the talk and asked good questions— listen to the talk here. At Ocean of Compassion Center in Campbell CA, she led an all-day workshop on “Finding Happiness through Wisdom,” which included two Dharma talks, meditation, and discussion. It was a lively group that sincerely wanted to learn the Dharma. Watch the talks here. 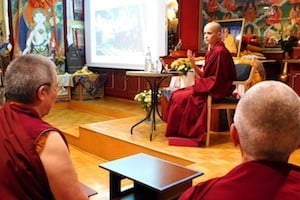 Ven. Jampa spent three weeks in Germany to share about her training at Sravasti Abbey and her bhikshuni ordination in Taiwan. She gave presentations on the Abbey’s history and monastic training at the Tibetan Center in Hamburg, the new Shide Nunnery in Lueneburger Heide, and Tibet House in Frankfurt. The discussion focused on the importance of having bhikshus and bhikshunis in the West to establish the Buddhadharma. In Berlin she spoke about the importance of compassion and cherishing others, and she shared different forms of meditation at the International Coaching Association.

Ven. Jampa also met many friends and family members with whom she discussed the importance of monastic life in the West. Everyone she met expressed lots of appreciation for what the Abbey is doing. Ven. Jampa also had the opportunity to attend teachings with His Holiness the Dalai Lama in Riga, Latvia, where he taught on the second chapter of Dharmakirti’s Pramanavarttika. His Holiness’s teachings can be found online here.

Every year for twenty-two years, Western Buddhist monastics have met for a five-day gathering to learn about each other’s teachings and practices and to discuss topics of common interest. 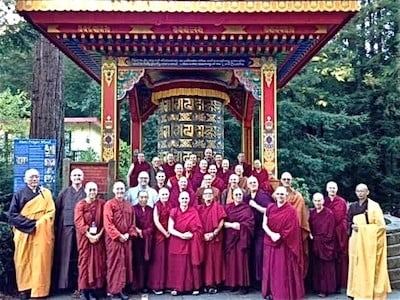 This year, 40 of us met at Land of Medicine Buddha in Soquel, California, from October 17-21. Our topic this year was “Sustaining the Sangha in the West.” Most of our sessions began with a presentation, followed by discussion. Sometimes our discussions were in dyads or small groups, other times with the entire group. The gathering follows the traditional meaning of the word “sangha” as a community of four or more fully-ordained monastics.

We also visited the Nyingma center, Pema Osel Ling, one afternoon, where we saw their Stupa World Peace Park, with a large central stupa to dispel hindrances surrounded by the eight traditional stupas. Ven. Samten shares about the field trip here. Read the full report about the monastic gathering here. 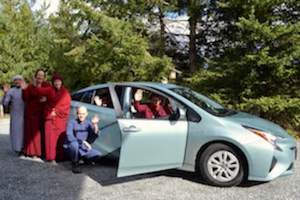 With your help, the Abbey has a new car! It’s a Toyota Prius.

Environmental impact is an important consideration for the Abbey community. We did lots of research and talked to many people about how their vehicles perform in our Inland Northwest winters. With these issues in mind, we settled on the Prius.

More than 130 people responded to Kuni’s appeal to help the Abbey buy a new car. In addition, two people offered used vehicles—a car and a small truck—to upgrade the Abbey “fleet.” We can now sell some of the older vehicles in the coming weeks.

Once again, the kindness of many, many people joined together to support the Abbey’s Dharma outreach activities. Thank you! 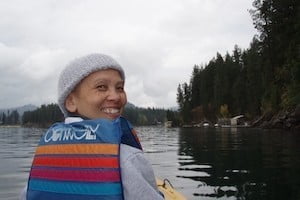 The new Sravasti Abbey website is up and running!

Many thank to Dorey Design Group and the wonderful volunteers that have helped bring this project to fruition.

The Abbey community spent a lovely day out at our friends Doug and Sarah’s family lake house on Hayden lake in Idaho. We are so grateful for their generosity in hosting the sangha in the beautiful outdoors, and offering a hearty and nourishing lunch with love. href=”/2016-photo-gallery/#oct16lakeday”>See the photos.

We welcomed Ven. Tai Sinh from Deer Park Monastery to the Abbey. Although he was planning to stay for four months, he was called away by a family emergency. Together with Ven. Tien, who is also visiting us for some months, there were two monastics from the Vietnamese tradition staying with us. We rejoice in monastics from different Buddhist traditions learning from each other and practicing together.

It is now a year since we purchased Tara’s Refuge. In that time we have worked hard to rehabilitate the meadow and fix up the house. In addition, we found a contractor who has just taken down three dilapidated out-buildings—the barn, chicken coop, and vehicle shelter—thus opening up the view of the hills behind. We have yet to pick the apples. Before long, we’ll wish the turtles in the pool and the bear in the forest happy winters until we see them again in the spring. The deer and turkeys keep us company all winter.

Al, one of the inmates I correspond with, wrote about his feelings after his cousin committed suicide and wrote a poem for her.

Maureen shares how study in the Sravasti Abbey Friends Education program (SAFE) has helped her in Taming the Mind.