As the seasons change, we’re heading into autumn. The bushes are red and yellow, and the trees are just beginning to turn colors.

September brought a variety of guests to the Abbey. Ven. Tsepal’s mother came for a visit, and three friends from Singapore—Richard, Joline, and Winson—stayed with us for some days.
Ven. Samten’s brother and sister-in-law visited too. Her brother, who had attended Catholic school as a child, commented, “Your Abbess is very happy and smiles a lot.” Later in the month, Ven. Samten’s sister and brother-in-law visited and prepared a delicious lunch for the community, as they always do when they visit.

There were many more guests, including Ven. Thien, a nun from the Vietnamese tradition, whose sister and brother-in-law also stopped by for a while. We’re delighted when family and friends visit the Abbey. 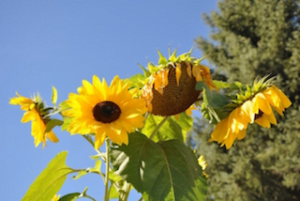 We had a full house, with nearly 55 people attending the Cultivating Concentration Retreat over Labor Day.

The retreat consisted of teachings on how to meditate and practice sessions using the breath or the image of the Buddha as our object of concentration. Watch the introduction to breathing meditation. The entire retreat video series is here.

In the afternoons, there was a session of alternating walking and sitting meditation in the garden, which people found very refreshing. Working patiently with their monkey minds, everyone did well and was calm and joyful at the conclusion of the retreat.

The Abbey welcomed Geshe Dadul Namgyal back to the Abbey to teach “Madhyamaka Through Metaphors” for three and a half days.

Using a PowerPoint presentation with photos that illustrate dependent arising and emptiness, Geshe-la covered all the important points of the meditation on emptiness.

The 35 people in attendance enthusiastically discussed the teachings amongst themselves and with Geshe-la during the break times, making for a stimulating and enjoyable exchange of ideas as all of us tried to wrap our minds around the notions of existing but not existing inherently, being empty but not being nonexistent.

We had another crowd of over 50 people at this month’s Sharing the Dharma Day. We focused on the last verse of the “Thirty-seven Practices of Bodhisattvas,” which speaks of dedicating the merit of our virtuous activities.

To remove the suffering of limitless beings,
Understanding the purity of the three spheres,
Dedicate the virtue from making such effort
To enlightenment—
This is the practice of bodhisattvas.

We should always dedicate for the most long-term expansive aim—the full awareness of each and every sentient beings. Then we can dedicate for other aims, such as being born with a precious human life in all future rebirths and meeting fully qualified Mahayana and Vajrayana spiritual mentors to guide us. We can also dedicate for swift recovery friends and family who are ill or who passed away and for nations and groups of people to live in peace.

Once a month we invite people to join the Abbey community for a day of offering service. We begin the day by generating bodhicitta together, then work together in the forest, garden, or indoors. The day concludes with a brief meditation.

It was pouring rain on this September Saturday, but a group of hearty people spent not only the morning but also the afternoon in the forest, cutting down trees and bucking up and stacking the wood. Others helped with cleaning, making malas for inmates, and rolling mantra coils to put inside statues. And, fortunately, a few others spent the afternoon making pies, which everyone enjoyed!

Our last one of the year was October 8.

Our work thinning the forest and removing dead or damaged trees continues. Our Singapore friends, who are new to forest work—Singapore is an island-city-country filled with high-rise buildings—joined in with exuberance. One afternoon, the Singaporeans, Geo and Jac (20-somethings who visited us), most of the nuns, and a few other guests also joined in. We had a great time and got so much done!

A week later, we did a “swarm” on Milarepa’s Mile—an uphill and then downhill path in the northern part of our property. The downhill path was so completely overgrown that it was hard to find it.  Even when we could discern the path, it was cluttered with so many fallen trees it was difficult to walk.

All the monastics and anagarikas—except a few who stayed back to cook for us—plus Dave and Ryan who are sawyers, Ashley and Christina who are Ven. Damcho’s friends from college, and a few other volunteers got to work to clear the path. Although we didn’t expect to complete it, with everyone’s participation and joyous energy, we did! Plus we had a great time working together. Photos are here.

Over a year in the making, the new site includes easy access to everyone’s favorite features, like the photo gallery and event schedule. It also makes topics such as visiting information much more accessible.

Many thanks to the wonderful volunteers that have helped bring this project to fruition. Watch for a site launch announcement within the next few weeks.

We rejoice in the historic achievement of the 20 Tibetan nuns who successfully completed their 17 years of Geshe studies. A friend from Jangchub Choeling nunnery shared photos of the class wearing the yellow dongkas (vest) and hats that indicate their status as Geshemas.

We had a movie afternoon one Sunday when we watched Half the Sky, which shows the situation of women in many countries. The provocative documentary is based on the book of the same title by award-winning journalists Nicholas Kristof and Sheryl WuDunn. In the coming weeks we plan to watch The Mask You Live In, which is about the conditioning that boys and young men receive.

Read Laveeta’s piece, “Facing the Death of a Child,” where she shares how she is working with the sudden death of her adult child.

We encourage everyone to vote! If you haven’t registered to vote yet, please do now!