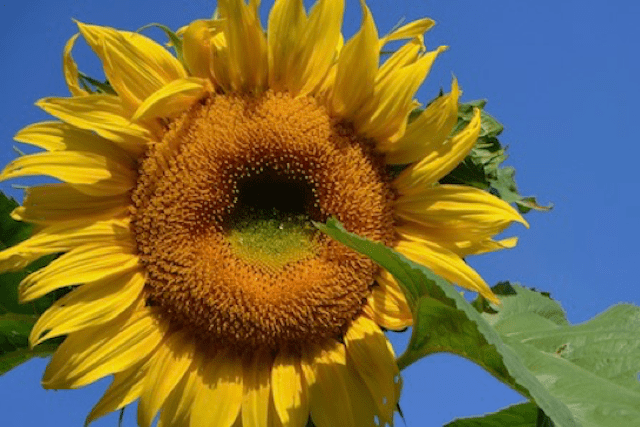 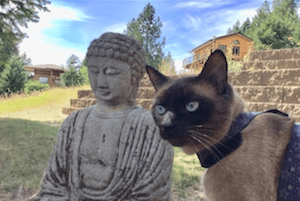 The summer heat has begun to dry the leaves of the bushes in the forest in anticipation of autumn. One of our apple trees has inundated us with apples and we’re busy making applesauce, which will be a staple during the winter. Some of the plum trees have offered us their fruit, while more apple, plum, and a few new pear trees are still ripening their harvest.

A doe comes for her daily apples, and occasionally brings her fawn. She is totally relaxed around us; we named her Rinchen. A turkey couple also eats well here. Unfortunately, their three chicks disappeared; we fear the coyotes took them for dinner. The bunnies and chipmunks scurry across the paths, and various birds and squirrels chirp.
See photos of Abbey life in August here.
Bhikshuni Thubten Chodron & the Sravasti Abbey Community

Our annual Exploring Monastic Life program, which began in July, continued into August with 15 participants. All were very sincere in investigating how to live their spiritual yearning and their wish to become more compassionate. Together with Abbey residents, they listened to Dharma talks on the benefits of monastic life for individuals and for society as a whole.

Abbey residents gave Bodhisattva’s Breakfast Corner talks about their experience as monastics—the challenges and the joys. EMLers also had discussion groups that got them thinking about various aspects of their life and the attitudes and expectations they would bring to monastic life if they chose to ordain. The group this year was serious and sincere, and we wish them everything good as they go forward in their Dharma practice.

Once again, we were privileged to hear teachings on Dharmakirti’s text Pramāṇavārttika from the respected scholar, Geshe Yeshe Thabkhe, who taught at the Central Institute of Higher Tibetan Studies (formerly called Central University for Tibetan Studies) in Sarnath for many years.

Geshela had taught the beginning of chapter 2 last year and continued with it this year. The topic is Dignāga’s homage to the Buddha, and Dharmakirti’s commentary presents the logical reasonings showing that the Buddha is a reliable teacher. We’ll finish the chapter next year.

Geshela taught us online from New Jersey, where he is staying at the Tibetan Buddhist Learning Center. Joshua Cutler kindly translated. Teachings will be posted online shortly. Photos are here.

The talk for August’s Sharing the Dharma Day focused on cultivating equanimity, a mind that is free from partiality and is open toward all beings. Doing this necessitates shedding our clinging attachment for friends, antipathy for enemies and people we don’t like, and apathy for strangers.

Ven. Chodron led the group in an investigative meditation, asking ourselves why we are so attached to some people, so angry at others, and indifferent to many. The results were eye-opening. (Read chapter 22 in An Open-Hearted Life, the book the teachings are based on, to do the meditation yourself.) Watch the teaching here.

Our afternoon discussion tackled the issue of partiality as we admitted to judging people in light of how they relate to us, as if we were the most important one in the world. The day inspired us to do our best to break out of the self-centered perspective that causes so many problems.
Enjoy the photos here. Join us on the next Sharing the Dharma Day on September 15 for a rich day of meditation, teachings, and discussion.

This bright, sunny day welcomed about fifteen volunteers who worked together with community members to care for the Abbey. We were delighted that two friends from Montana brought their young children who helped Ven. Semkye to transplant trees and Ven. Nyima to nurture plants in the veggie garden.

Another group of us worked in the forest, some bucking up dead trees and others limbing living trees to prevent fire danger in seven acres of crowded forest land just below the Abbey’s buildings.Others prepared juniper and rolled mantras to put inside Buddha statues. Everyone had a chance to connect over lunch and had a very good time working together.

See photos here. Join us for the next Offering Service Saturday on September 14.

Talks at the Gardenia Center

Ven. Sangye Khadro and Ven. Thubten Chodron gave the Sunday service at the Gardenia Center in Sandpoint over two consecutive weekends. Sravasti Abbey monastics have been connecting with their congregation for a number of years.

Ven. Khadro spoke about using meditation on compassion as a way to calm our mind when facing challenges. She described the disadvantages of letting the mind be uncontrolled and the advantages of applying antidotes. Listen to the talk here.

Ven. Chodron read an excerpt from her latest book Awaken Every Day about making life meaningful. She explained generosity and kindness are vital for our happiness and encouraged everyone to smile and let go of the worrying mind. Listen to the talk here.

Both services concluded with a song for peace, unity, and fellowship. After the talks, congregation members took time to connect with the nuns and show their gratitude.

Vens. Samten and Semkye participated in the annual Veterans for Peace convention held in Spokane this year. They were invited to lead morning meditations and join a sharing circle.

Veterans for Peace is a global organization of military veterans and their allies who work collectively to build a culture of peace. Their mission is to inform the public of the true causes of war and its enormous costs in terms of human lives, economic resources, environmental impact, and legal and moral ramifications. They feel deeply obligated to heal the wounds of war. Learn more about Veterans for Peace here.

The two nuns were deeply touched by the veterans’ wisdom and sincerity. They found kinship with the group and were inspired by the organization’s statement of purpose that parallels the Buddha’s teachings on practicing non-harm, compassion, and peace in our world in the face of growing militarism, social and economic injustice, and environmental degradation. Ven. Semkye gave two Bodhisattva’s Breakfast Corner talks about the convention. Listen to them here and here.

Ven. Sangye Khadro and Ven. Chonyi again visited the meditation group at the Idaho correctional facility in Orofino. The group includes four to six regular “seekers,” led by a long-time practitioner who came to Buddhism through serving his long-time prison term. His dedicated practice has won the admiration of prison staff as well as fellow inmates for his kindness and equanimity.

Ven. Sangye Khadro led a meditation and discussion about different types or level of happiness, and the men shared how they stay happy in prison.

One man, Robert, wrote a poem that describes his present approach to life in prison. You can read it here.

Ven. Chodron, together with Calvin Malone, who was incarcerated and is now held in civil confinement, wrote a book, Unlocking Your Potential: How to Get Out of Your Own Way. It is designed to inspire incarcerated people to overcome harmful thoughts and habitual destructive behavior, and to unlock their compassionate potential to contribute to society. Learn more about the book and download the free PDF version here.

The book is self-published by Sravasti Abbey and was printed for free distribution by the Corporate Body of the Buddha in Taiwan. We welcome donations to help us send complimentary copies to incarcerated men and women. We estimate that packaging and postage in the US will be about $4.50 for each book. Please mark your donations for our prison outreach. We are grateful for your kind offering!

Tim Wilson, our architect, came to the Abbey in early August to look at the site for the future Buddha Hall. It will be on the land that is currently a meadow above Gotami House and across the path from Prajna Cottage.

We decided that the building will be two stories, with a deck and a circumambulation path surrounding it. A septic system will be installed a little lower on the hillside.
Tim left with new ideas, and when his first plan is ready, we’ll go through a round of discussion, comment on it, and make changes. As with previous buildings, we’ll have several rounds of discussion, comments, and change. It’s an exciting and creative process.

We’ve added a Build the Buddha Hall page to our website where you can learn about the project. You can also go there to join in the effort to recite Buddha’s mantra. We’ve already surpassed the original goal of 108,000. Now we’re working toward 1 million recitations by Vesak Day—May 7, 2020—to help support your own practice and generate merit for the project. Please join us!

As many of you know, PacWest, a Canadian company, wants to build a silicon smelter in Newport, just miles from the Abbey. We’ve been joining many people in our local community to oppose this because it’s an environmental disaster that will destroy the natural habitat in our area. (Learn about it here.) We’re grateful to all who’ve written to the Pend Oreille County Commissioners expressing your opposition to the smelter. Please support our continued efforts by signing this petition to Washington State Governor Jay Inslee: Stop the Newport Smelter.

The Tattooed Buddha wrote a clear and amusing review of Ven. Chodron’s book, Awaken Every Day. Read the review here.

Buddhadharma wrote a review of Saṃsāra, Nirvāṇa, and Buddha Nature, volume three of The Library of Wisdom and Compassion. Read the review here.

Audio recordings of teachings from Exploring Buddhism for Young Adults 2019 are now on the web here, and so is the recording of Ven. Chodron’s evening talk on three kinds of compassion at the 16th Sakyadhita Conference, which is here.

Abbey residents recently met with a founding member of the Spokane Immigrant Rights Coalition (SIRC) to learn about their work to support and protect immigrant and refugee communities in Spokane. SIRC is currently focused on providing financial assistance to the growing numbers of families navigating the immigration system. Learn more about and support their good work here.

Details are now posted for our Winter Retreat 2020 and Retreat from Afar when we’ll be meditating on the Shakyamuni Buddha practice and Lam Rim teachings.