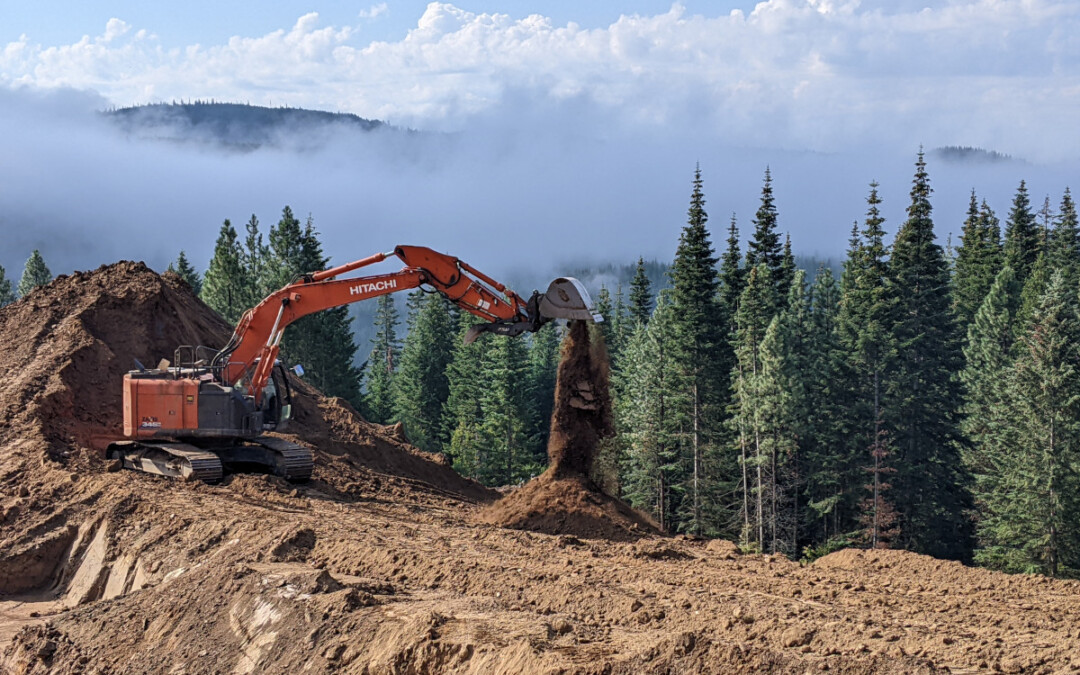 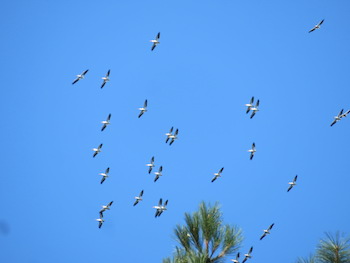 As daylight grows shorter, sunny hot days abound at the Abbey. Thankfully, due to lots of rain in the spring, the forest remains very green.

The turkey chicks are approaching their teenage phase and the deer are delighting in the apples our trees bequeath. We human beings continue with our Dharma study, meditation practice, welcoming lots of guests, and watching the meadow change form as construction on the Buddha Hall begins.

There was an unusual sighting in the sky above the site of the Buddha Hall a few days ago. A flock of white pelicans flew in from the east, and then proceeded to circumambulate the site of the Buddha Hall several times before flying on. It was a beautiful sight, watching them fly clockwise—the direction in which people circumambulate holy sites—gracefully gliding in unison.

May they be reborn with precious human lives, have faith and eagerness to learn the Dharma, and maybe become monastics who will circumambulate the fully constructed Buddha Hall! 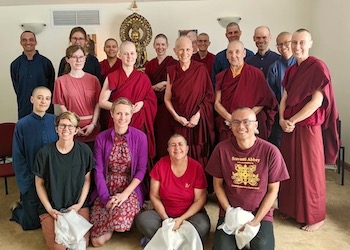 The Abbey was delighted to hold our annual Exploring Monastic Life (EML) program fully in person for the first time in three years. Nine guests hailing from Europe, Asia, and North and South America participated, along with our six resident shiksamanas and five anagarikas.

A few of the participants had been volunteering for the Abbey from afar, and some knew each other from an online group that had formed after the 2020 Exploring Monastic Life program. This contributed to the intimate and convivial atmosphere of the retreat.

The full days included teachings by Ven. Chodron and senior monastics on lay and monastic precepts and various issues regarding community life, as well as discussion groups and offering service activities. Participants had the opportunity to put their questions to a panel of bhikshunis (fully ordained nuns) and a panel of shiksamanas (novice nuns preparing for full ordination). Participants later shared that it was so helpful to hear how the shiksamanas had grown in their practice. Another highlight was the anagarika ordination ceremony for Luc, who now goes by his refuge name of Donyo.

As per EML tradition, we enjoyed working together in the forest, venturing into new areas to mitigate fire danger near Abbey buildings. The weather was especially cooperative this year, with no wildfire smoke. As a sampling of the service involved with monastic life, we also worked in the veggie garden, rolled mantras for inserting into statues for the Buddha Hall, cooked in the kitchen, and did lots of cleaning! 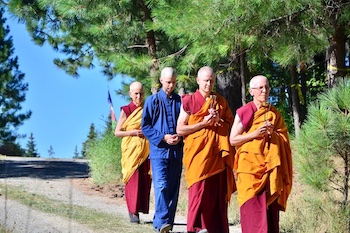 The group discussions asked us to dig deep into key issues that come up before and after ordination. These included our relationships with money, family, romantic partners, attachments, religion of origin, and how we handle stress.

During the final go-around, participants shared that the program had encouraged them to explore the meaning of real Dharma practice and how best to make a difference in the world. Many left feeling inspired by the joyous effort and generosity they witnessed in the Abbey community and reiterated their commitment to following the bodhisattva path.

See EML photos here and here. Read Brittany’s reflection on the difference between doing EML online and in person here. 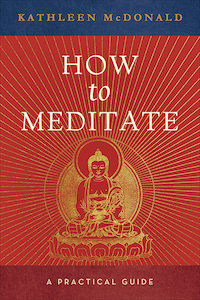 Venerable Sangye Khadro taught a weekend course on “How to Meditate,” bringing a wave of first-time retreatants to the Abbey. Eager participants learned about the basics of Buddhist meditation, different kinds of meditation, and how to deal with common problems such as distraction and drowsiness.

Abbey monastics, too, benefitted from a review of these fundamentals. They enjoyed sharing their experience with the newer students during the guided meditation sessions and the discussion period. 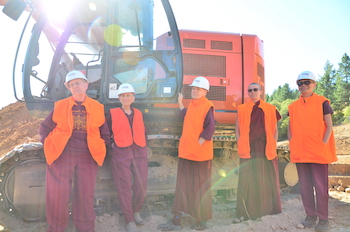 Construction began the last week of July with a huge orange excavator pulling up close to 100 trees by their roots in order to clear the land for the Buddha Hall. It was hard to watch them go, but it was for a good cause—for centuries, many people will progress on the path to full awakening in the Buddha Hall.

After felling the trees, a bulldozer and a front loader began to move the earth around, creating a (temporary) Mount Meru of dirt where the lower meadow used to be. During the last week, they dug the trenches where the footings will go; it’s said the footings will be poured next week.

We now look down from the landing and can point to where the main entrance, the columns supporting the upper deck, and so forth will be. Our imaginations can visualize the Buddha Hall rising up in rural eastern Washington State. 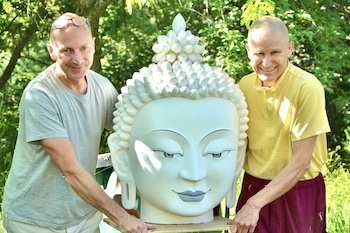 Meanwhile, Peter continues putting together the three statues for the main altar—the Buddha, his attendant Ven. Ananda who recited the sutras at the First Council, and Ven. Mahaprajapati, the Buddha’s foster mother and first Buddhist nun.

The faces of these sages come alive in the statues and they will greet all of us with acceptance and compassion when we enter the main meditation room in the Buddha Hall. Watch Peter’s talk about what’s involved in making the statues here.

Inspired by the suggestion to make a Buddha Hall photo calendar, the community did a dress-up session posing as construction workers on the building site. While we probably won’t do a calendar, we had lots of fun. Enjoy wacky Monastics in Hard Hats photos here.

See photos of the site transformation here and here. Get the latest Buddha Hall updates here. 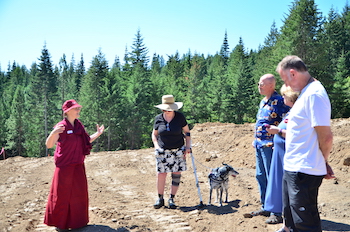 The morning opened with a guided meditation led by Ven. Sangye Khadro, after which Ven. Chodron taught on “Inspiring Compassion in Ourselves and Others,” chapter 54 of An Open-Hearted Life. Watch the meditation here and the talk here.

All of us learn from observing others. When we meet people who model the types of behavior that we respect and want to emulate, we can learn a lot simply by observing how they interact with others, how they deal with difficulties, and so on.

We, too, can become models for others. If we want to become more compassionate, the challenge, then, is to consciously choose people with that trait as our role models. And if we wish to inspire others to be more compassionate, we need to cultivate that quality in ourselves. But our motivation must be pure: trying to be a role model so that others will praise and respect us is a dead end.

After a potluck lunch, we took guests to see the site of the Buddha Hall and also to visit Peter’s improvised workshop in the barn where they admired the large statues he has made of the Buddha, Venerable Ananda, and Venerable Mahaprajapati for the main altar. Talk about inspiring! 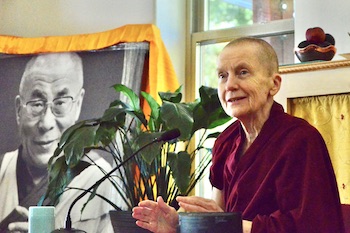 The ongoing tenets class taught by Ven. Sangye Khadro had a few weeks’ break during EML. When it resumed in mid-August, we started exploring the tenets of Prasangika Madhyamaka, the most important and most difficult of the philosophical systems.

This will help prepare students for Geshe Yeshi Lhundup’s upcoming course on Illumination of the Thought—Lama Tsongkhapa’s commentary to Chandrakirti’s amazing text, Madhyamakavatara. You may attend this course either in person or online. It goes from October 3 to November 11. Learn more about it here.

In her monthly online talk to the Sandpoint Sangha, Ven. Sangye Khadro discussed verse four of Langri Tangpa’s text, “The Eight Verses of Thought Transformation.” This verse talks about seeing difficult people—those who are overwhelmed by negative energy and intense suffering—as rare and precious because they provide excellent opportunities for cultivating empathy, compassion, and forgiveness.

Meanwhile, Ven. Chodron continues teaching Shantideva’s Engaging in the Bodhisattva’s Deeds on Thursday mornings. Shantideva tells it like it is and doesn’t abide the machinations of our self-centered attitude. It’s a great text to get us going in our practice. Tune in live here and find the edited teachings here. 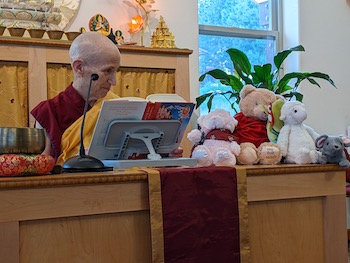 On Friday evenings, Ven. Chodron teaches from Samsara, Nirvana, and Buddha Nature, Volume 3 in His Holiness the Dalai Lama’s Library of Wisdom and Compassion. Before delving into the teachings, she teaches Dharma for kids young and old with Buddha Bear and a menagerie of friends. Watch live here and follow edited teachings here.

Following in the Buddha’s Footsteps

Once a month, Ven. Chodron gives a talk on refuge—including topics such as the qualities of each of the Three Jewels and how to relate to them according to the Fundamental Vehicle, Mahayana, and Vajrayana—for Vajrayana Institute in Sydney, Australia. The talks are based on Following in the Buddha’s Footsteps, Volume 4 of The Library of Wisdom and Compassion. Learn about the next talk on September 17 here. Watch past talks here. 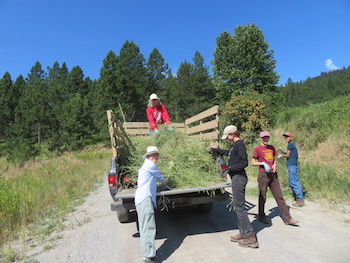 A great group of volunteers came to work together with Abbey residents on this month’s Offering Service Saturday.

The weather was good, so most people worked outdoors in the gardens and the forest. Forest work near the site of the Buddha Hall is especially important now to create walking paths and to limb trees to mitigate fire danger.

People had a great time and we accomplished a lot!

Join us for the next Offering Service Saturday on September 10. Learn more here. 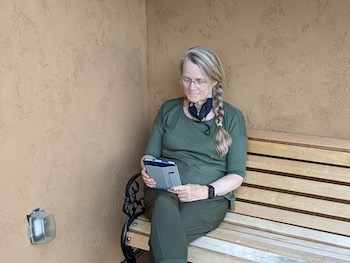 Sravasti Abbey Friends Education (SAFE) is a facilitated online study program to explore Buddha’s teachings. Courses are progressive, starting with an introduction to meditation practice and the Buddhist worldview, then continuing through bodhicitta and the six perfections.

SAFE helps people to deepen their spiritual practice through study and meditation and strengthen their connection with Ven. Chodron and Sravasti Abbey.

Registration for the entry level course, SAFE 1A. opened on August 2 and closes once all available spots are filled. Learn more about SAFE and register for SAFE 1A on our website here.

If you just completed a SAFE course this year, you are automatically enrolled in the next module. If you have taken some time away from a SAFE course, please write to our office to re-enroll and continue your Dharma studies. 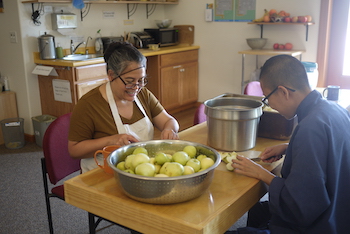