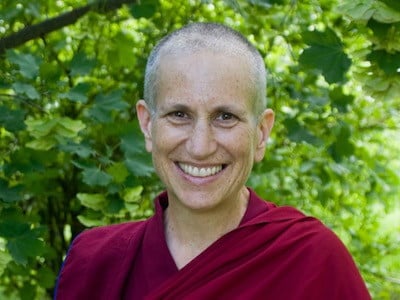 ♦ Buddhism in the 21st Century

The Indian prince who became Shakyamuni Buddha left his palace life to become a fully awakened Buddha more than 2,600 years ago. Since then, faithful disciples have spread his teachings throughout the world. What exactly did the Buddha teach? Are those teachings still relevant today? What can modern students learn from this ancient wisdom? What can we adapt, and what must stay unchanged?

Join American nun Thubten Chodron as she shares from more than 40 years of lived experience as a first-generation Western Buddhist monastic about her journey into Buddhism and how the Buddha’s teachings relate to our modern lives.

Classical presentations of the Buddhist path were written for Buddhist audiences, assuming the reader already has faith in the Buddha and believes in rebirth and karma. But His Holiness the Dalai Lama understands modern, Western students need a different approach.

Join Buddhist nun Ven. Thubten Chodron in London, England for talks at the British Library: Buddhism in the 21st Century and Approaching the Buddhist Path.American nun Thubten Chodron shares from Approaching the Buddhist Path, the first book in a multi-volume series she is coauthoring with the Dalai Lama on the steps to awakening. It offers a framework for practicing the Buddha’s teachings in modern times, unveiling a path of wisdom and compassion that leads to  personal fulfillment and a meaningful life.