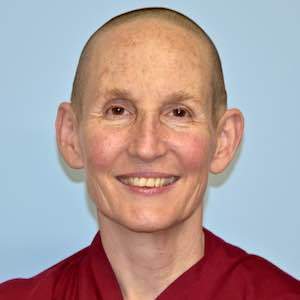 Talk 2 in a four-talk series exploring the

This Cascade Hermitage talks on Karuna in Four Immeasurables series is postponed til October 31st due to wildfires.

The Four Immeasurables, or Four Brahma Viharas, are four esteemed Buddhist virtues, and the meditation practices to cultivate them are dearly valued in all traditions of Buddhism. Please join us for an experiential exploration of practices that open the heart towards self and others.

Cascade Hermitage, a retreat for Buddhist monastics and laity, is the vision of Abbey friends Sarah Conover and Doug Robnette. It sits on 20 forested acres near Winthrop, WA and will include two year-round monastic retreat huts and a stewards’ home.

Tenzin Tsepal began meditating in high school in the 1970s. She practiced vipassana for ten years, before finding Tibetan Buddhism, which she has practiced since 1995. A three-month retreat in 1998 changed her worldview and life focus. Leaving family, friends and career, she headed to India where she received novice ordination from His Holiness the Dalai Lama in 2001. Ven. Tsepal studied Buddhist philosophy for many years at Chenrezig Institute in Australia, where she served as the Western Teacher. In 2016, she joined Sravasti Abbey Buddhist Monastery in Newport, WA and received full ordination in 2019.