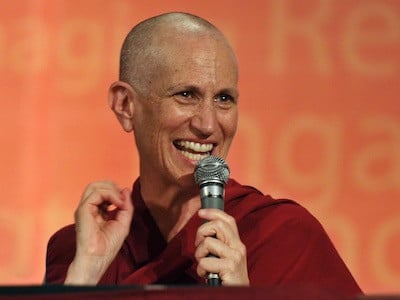 In old Tibet, about 20% of the population were monks and nuns. In 1959, tens of thousands of them fled after an abortive uprising in Lhasa, to become refugees in India and Nepal. Ven. Chodron will discuss how the Tibetans have preserved their monastic tradition in exile, and the challenges that have arisen from engaging with modernity and other cultures.

In the late ‘60s and ‘70s, young Westerners encountered Tibetan teachers, and sat at their feet learning meditation and the Buddha’s teachings. It was an unusual mix of the most conservative elements of Tibetan culture with the most liberal segment of Western society. How did they affect each other, and how have the Westerners who ordained as monks and nuns in the Tibetan Buddhist tradition fared?

As one of the earliest Westerners who ordained as a Tibetan Buddhist nun, Ven. Chodron will speak from personal experience and lived observation. Chinese translation will be provided.