First for Nuns in America 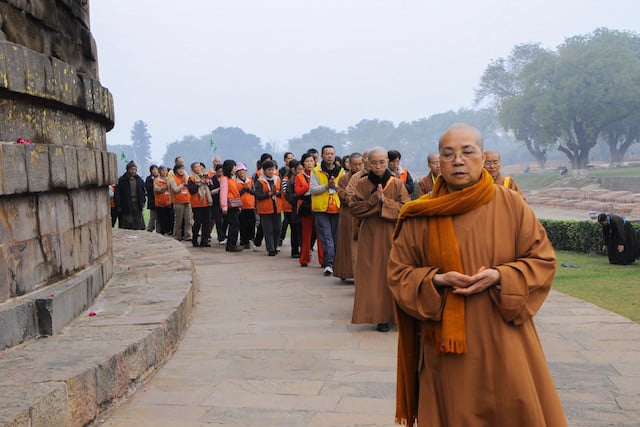 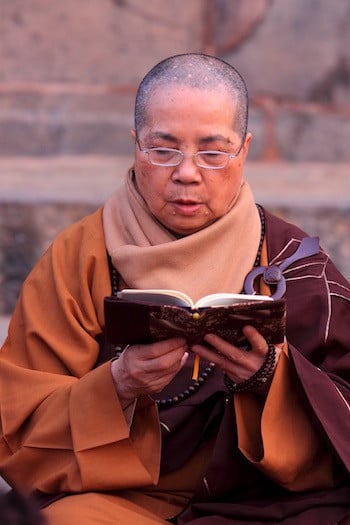 In a first for nuns in America, 50 Buddhist nuns from nine countries will converge at Sravasti Abbey for Living Vinaya in the West. It’s an historic, 16-day training program from January 22 to February 8.

Eminent Master Venerable Wuyin, founder and abbess of Luminary International Buddhist Society (LIBS) in Taiwan, and six senior nuns from her institute will teach on the Vinaya, the code of Buddhist monastic discipline. Master Wuyin will teach in Mandarin with English translation. We believe the course is the first such training offered in the United States for Western nuns. We are thrilled to host it.

More than 40 volunteers will help out by driving nuns up from the Spokane airport, cooking meals, and so forth. Others have made offerings to help cover expenses — including faculty travel from Taiwan and food for 60+ people — for the 18-day program. Thus, not only the resident monastics, but also friends from the Abbey’s entire extended network are joining to create this first for nuns.

Nuns from three Buddhist traditions—Chinese Mahayana, Tibetan, and Theravada—will come from Europe, Asia, and South America as well as the U.S. and Canada to attend the course. Venerable Master Wuyin and the LIBS faculty will explain the prescriptive guidelines the Buddha established for nuns. They will also help us examine why and how to establish flourishing monastic communities within modern society and look at the role of the individual within a monastic community. LIBS and the Abbey intend to compile the teachings for future publication.

Why Living Vinaya in the West is Important

Until now, Western nuns have traveled to Taiwan and other Asian countries to receive Vinaya training in a foreign language and with limited translation. Hence, it is exceptional to have a teacher and her community come to the United States to impart both the textual teachings and the lived experience of ordained Buddhist sangha community. One landmark of the Living Vinaya in the West course is linguistic, in that Sravasti Abbey and LIBS are creating resources in English for Western monastics. This is crucial  for rooting the Buddha’s teachings—the Dharma—in the West.

Since the Buddha’s time, ordained monks and nuns have been charged with preserving the teachings and spiritual practice taught by Shakyamuni Buddha, founding teacher of Buddhism. He stated that where a community of four or more fully ordained monks or nuns practices the monastic code, his teachings would live long in the world. For that reason, Buddhist monasteries are necessary for the teachings to thrive. Sravasti Abbey was founded on that basis, and the Living Vinaya in the West course aims to help Buddhist nuns in their spiritual practice.

According to a 2012 Pew Charitable Trust report, 1.2 million Buddhists live in the US, and the religion is still new here. Chinese immigrants founded the first recorded Buddhist temple in 1853. Today, however, the majority of American Buddhists are Caucasian. Numerous centers and temples serve lay Buddhist practitioners of all ethnic backgrounds, but Buddhist monasteries are few. For example, the Abbey is the first monastery in the Tibetan Buddhist tradition in the U.S. specifically for Western nuns and monks, where teachings and practices are carried out in English.

Guest instructor Venerable Master Wuyin has been a bhikshuni (fully ordained Buddhist nun) for nearly 60 years. LIBS, the organization she founded, provides study programs for nuns and laypeople, text translation, and publishing. Under Master Wuyin’s guidance, LIBS has become one of the most respected centers in Taiwan for education and training of bhikshunis. Master Wuyin and nuns from LIBS have been key in supporting the development of Sravasti Abbey through their association with our founder, VenerableThubten Chodron.

One of the first generation of Western students to ordain in the Tibetan tradition, Ven. Chodron has been a Buddhist nun for 40 years.  She is a well-known teacher, prolific author, and a direct student of His Holiness the 14th Dalai Lama. She, too, has devoted much effort to improving conditions for Buddhist nuns. Motivated by a wish to offer opportunities for Western Buddhists—men and women—to adopt the monastic life, she began the Abbey in 2003 with His Holiness’ blessing.

Venerable Chodron first met Venerable Master Wuyin in 1995 when she traveled to Taiwan to request Vinaya teachings for the Life as a Western Buddhist Nun education program in Bodh Gaya, India. Co-organized by Venerable Chodron, it was the first training of its kind. Venerable Wuyin’s teachings from that course were later edited and published as Choosing Simplicity, among the first English-language commentaries on the nuns’ code of ethics.

The aspiration for a follow-up course began there. Now, over 20 years after their initial meeting, the sequel is coming to fruition with Living Winaya in the West.

Thank you all for helping to create this first for nuns in America!