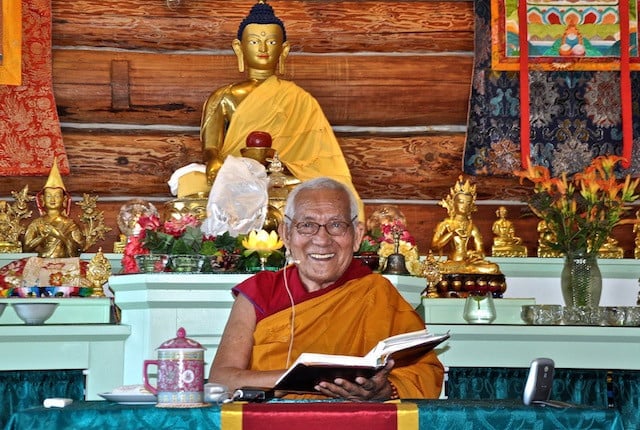 Study philosophy with one of the last great Buddhist scholars trained in Tibet!

We are overjoyed that Tibetan scholar Geshe Yeshe Thabkhe will continue teaching Aryadeva’s Four Hundred Stanzas on the Middle Way with Joshua Cutler as his English interpreter.

Since 2013, the Sravasti Abbey community and guests have had the great fortune to study Aryadeva’s Four Hundred Stanzas on the Middle Way with Geshe Yeshe Thabkhe, one of the last remaining great Buddhist scholars trained in Tibet. Each year, Geshe Thabkhe has taught us a hundred stanzas of this powerful poem that gets to the heart of Middle Way Buddhist philosophy, with skilful English translation by Joshua Cutler, the editor-in-chief of the Lamrim Chenmo Translation Committee.

This year, Geshe Thabkhe will complete the transmission and commentary on the final hundred verses, which focus on refuting wrong views about the nature of reality. The teachings will be given exclusively to Sravasti Abbey via live stream from the Tibetan Buddhist Learning Center in New Jersey, supplemented by daily meditations, discussion groups, and Q&A with Venerable Thubten Chodron and Abbey senior monastics.

Please join us for this rare opportunity to delve into this rich philosophical text taught by an eminent scholar with an excellent translator in a conducive retreat environment. To learn more about the text, you can watch Geshe Thabkhe’s past teachings here and Ven. Chodron’s commentary on the text here. Details on the upcoming retreat can be found here. Also, you can read Geshela’s thoughts on Sravasti Abbey and view photos from his 2014 visit.

Below are excerpts from Geshe Yeshe Thabkhe’s biography:

Geshe Thabkhe is a celebrated scholar and teacher. Born in 1930, he became a monk at 13. After completing his studies at Drepung Loseling Monastery in 1969, he was awarded Geshe Lharampa, the highest degree in the Geluk School of Tibetan Buddhism.

Currently he teaches at the Central Institute of Higher Tibetan Studies in Sarnath, India as a professor of the Indian Tradition of Buddhist Philosophy. He is an eminent scholar of both Madhyamaka and Indian Buddhist studies. His works include translation of The Essence of Good Explanation of Definitive and Interpretable Meanings (Tib. Lek-Shey Nying-Po) by Lama Tsongkhapa into Hindi and A Commentary on the Rice Seedlings Sutra (Skt. Salistamba Sutra) by Vasubandhu.

Geshela has facilitated many research works, such as a complete translation of Tsongkhapa’s The Great Treatise on the Stages of the Path to Enlightenment (Tib. Lam Rim Chen Mo), a major project undertaken by The Tibetan Buddhist Learning Center in New Jersey where he teaches regularly.