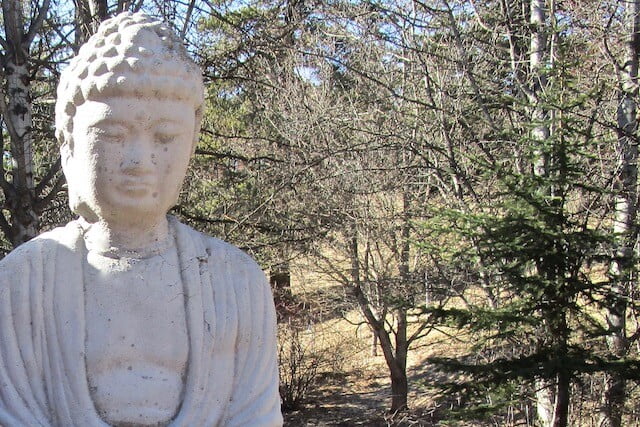 Eric Stone is a therapist who works predominantly with torture survivors. He tunes in to the Sravasti Abbey Youtube channel regularly and sent his reflections in response to our recent talks on the coronavirus pandemic.

Did you see the brigade of men walking into the burning buildings about to crumble on 911? Stoically marching toward. I saw them for a moment. And then they turned to ash. And I ran away.

They appeared again, out of thin air, in an instant, in Paradise, when the earth raged back at us for our sins against it:  they got up in the morning. They brushed their teeth. They drove to work. They walked toward the fire, straight into it.

Again, we ran away to save ourselves.

Did you see the UPS driver this evening delivering your hand sanitizers, the supermarket cashiers this morning, working triple shifts, scanning your bulk of dry goods, your canned goods, your seven tubes of toothpaste? Did you see, really see, the vet tech who cleaned your dogs wounded paw?

Did you see the receptionist at the urgent care last night, exhausted, her eyes swollen, like two red eggs, holding back yawns, as she took our insurance card numbers? The pet store workers asked if we had enough kitty litter, enough dog treats, enough medicine for our ailing pets.

The cashiers at Costco said, “how are you and have a great day” to every shopper. They had makeup on, lipstick, glittery eye shadow, pins on their shirts, painted nails. They put that make up on, got up in the morning, washed their faces, painted their nails, to come to check our groceries. During a vague and unclear public health crisis. They told us to be safe and healthy while most customers covered their mouths under their shirts not waiting to touch them. Do they feel like untouchables?

The food gets to the store because somebody drives it there. Who is that somebody?  What does he dream of, fear? Who cans the canned goods, harvests seeds, cleans the fruit, divides it? Who picks the vegetables in Salinas, California? Tens of thousands of undocumented migrants pick and pack it. They live in fear. Invisibly serving us. We who do not want them.

Who cares for the cows who produce the milk to make the cheese to be driven to the store by the driver of the truck so we can complain we do not have enough?

Those currently working from home can relax; rejoice even: a much needed break. They are protected by computer screens and reliable paychecks. Refugees, without nations, do not work from home. Unemployed waiters cannot serve patrons from kitchen tables.

Those in the midst, in the fields, on the docks, in the stores, working in the urgent care clinics, on the front lines; those running toward the fires, toward the viruses, marching directly into the wars, the genocides, the famines; while the rest of us run away, hoarding.

The ghosts of goodness, usually underpaid, unseen, wake up in the morning. They wash their faces. They worry about her children. The aid workers in Syria see the bombs dropping. They look at them. They walk under them, to help the screaming parents of lost children.

I think we can all show up.

I think is a global, spiritual test, a great opportunity for deepening all forms of humanist or spiritual practice; to be set free from the cages of fear and self important grasping, and released, maybe even to fly, to soar, into the beautiful, electrifying uncertainty of reality: to see the true nature of things; to see this as a reminder of our inherent emptiness, the clear nature of our impermanence, and the profound necessity – perhaps even a karmic, cosmic, global demand – to cultivate compassion and empathy: for the earth, for each other, for the survival of our collective souls.