Growing up in East Germany

Venerable Thubten Jampa shares about the culture she grew up in in the German Democratic Republic, and the process of transition after the fall of the Berlin Wall. See this June 27th BBC here.

Living here at Sravasti Abbey, located in the US with most residents born here or in Canada, I feel sometimes as if I am from the moon. Occasionally people here share about their time growing up in the US or joke about this or that comic or movie. Comic figures like Mickey Mouse, The Wizard of Oz, Peter Pan, and the whole Hollywood production I totally missed out on. Why? Because I am not born on the moon but in a country that had a wall around it! I was literally imprisoned within my own country.

I was born in the GDR (German Democratic Republic) – founded in 1949 as a result of increasing conflicts of interest between the US and the Soviet Socialist Republic. In 1961 the GDR government decided to build an enormous wall through Germany and inside Berlin to prevent people from fleeing to West Germany. By then it was not possible to get to West Germany alive. Border police from East Germany shot everybody who tried to flee. About 700 people died in their attempt to make it to West Germany between 1961 and 1989.

I was born in 1977, the second generation of East German-born citizens. I lived in the GDR until the wall came down in 1989. I was 12 years old by then. Listening to how you Americans and Canadians lived at that age—what media, movies, stars, music etc. influenced your lives—and reflecting on my own, I became very aware that I lived behind walls. To give you an idea what it was like to be a young person in the GDR, I would like to share a brief description of how a child from seven to twelve years old spent her time.

My days in the GDR were not so much influenced by media, films, and music, but by an ideology of the Ernst Thaelmann Pioneer Movement founded in 1948. Ninety-eight percent of the GDR’s students were members of this movement. The main approach was to become a productive member of a socialist republic. Instead of reading Peter Pan, we went after school or on weekends through our communities to collect glass and recycle paper, to collect toys and clothing, or we baked and sold cakes to collect money for poor children in Africa.

We spent our time on cleaning and weeding public places or parks, such as memorial parks, or we planted trees. We cared for the elderly and met regularly to learn and memorize national songs. We went to pioneer camps to train in sports, music, and art. We learned how to sow, cultivate, and harvest fields. We learned how to survive on our own in the forests. We learned to give first aid to people who had accidents or wounds, or who even had stopped breathing.

At that time I had no idea what Socialism meant. I had no information what it was all about. In the GDR, the actual classes on Socialism were given about age of 13 to 17. I just knew that we were for peace, friendship, support of poor people, and nature.

Some minor musical or media imprints that reinforced my experiences were, for example, a song called, “May There Always Be Sunshine.” We sang it regularly and it goes like this:

Another song that I think has never found its way to the West is “Little White Dove of Peace.”

Little White Dove of Peace
fly over the land;
all people, big, small,
you are well known.

Fly over the big water,
over hill and dale;
bring all people peace,
greet them a thousand times.

And we wish for the journey
Joy and good luck,
little white dove,
Come back soon.

For me, these songs taught that we need loving families, that we need a healthy natural environment. That we need sunshine and blue skies means peace and friendship. Those basic needs of life we share with everyone in the whole world.

I recall another media influence. It’s a story about a little girl that really touched my heart when I heard about it. 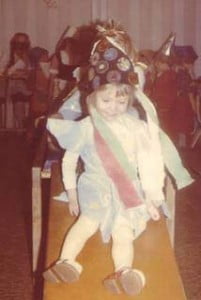 There was once upon a time a little girl whose father and mother were dead, and she was so poor that she no longer had a room to live in, or a bed to sleep in, and at last she had nothing else but the clothes she was wearing and a little bit of bread in her hand, which some charitable person had given her. She was good and pious, however. And as she was thus forsaken by all the world, she went forth into the open country, trusting in the good.

Then a poor man met her, who said, “Ah, give me something to eat. I am so hungry.” She handed him her whole piece of bread and went onwards. Then came a child who moaned and said, “My head is so cold. Give me something to cover it with.” So she took off her hood and gave it to him. And when she had walked a little farther, she met another child who had no jacket and was frozen with cold. Then she gave him her own, and a little farther on one begged for a frock, and she gave that away also.

At length she got into a forest and it had already become dark. There came yet another child, who asked for a shirt, and the good little girl thought to herself, “It is a dark night and no one sees you. You can very well give your shirt away.” So she took it off, and gave that away too.

And as she so stood, with not one single thing left, suddenly some stars from heaven fell down, and they were nothing else but hard smooth pieces of money. Although she had just given her shirt away, she had a new one which was of the very finest linen. Then she put the money into it, and was rich all the days of her life.

It was an encouraging story for me as a child. It’s not the money that interested me but the goodness that I believed in very strongly. I was so thrilled by her that when I was three years old my mother did me a favor and clothed me for our annual carnival in a Star Money-like dress. I remember so much feeling very good within myself.

After the Wall Came Down

In October 1989, the wall came down, and East German citizens could travel freely and buy everything that we could not get during those forty years of separation. After the official reunification with West Germany in November 1990, we never heard those songs again. We never spoke about Pioneers again. Instead of Star Money, we read or watched movies like the DuckTales, ALF, Ghostbusters, Star Wars, Knight Rider, Batman, or Ninja Turtles.

It’s not only that the media input increased from nearly two movies per year to one or two movies per day! Where we once listened to one song per week, we now listened to ten songs in an hour. We did not have to attend military parades anymore, but we learned what democracy really means and that we have choices in life about where and how to live. Now we also focused on learning about consumer rights and travel agencies. We learned that there are a whole lot more countries out there then we thought—like Mexico, Ireland, Japan, and India—that we can travel to.

All these changes happened very quickly, and one could easily become overwhelmed. But what happened to the freedom and human rights that we fought for so diligently?

I think we never learned how to find peace within our own minds to start with. We may have joined Green Peace or Red Cross, and we may have become diligent voters for human rights. But what we missed out on—both in the GDR and in unified Germany—is this: How do we develop enough awareness within ourselves to recognize that we needed to cultivate loving-kindness and learn to love our neighbors and even our enemies. We did not learn how to subdue our anger—neither with Knight Rider nor Star Wars, nor with Star Money or the “Little White Dove.” Our whole life, whether we were born or lived in the East or the West, was focused on the material world outside. We were focused either on controlling others or getting out from under others’ control. What we never learned was how to control our own minds.