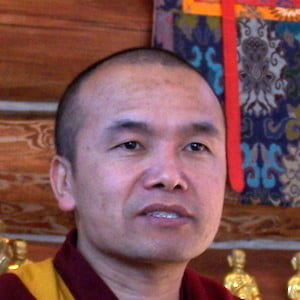 Geshe Dorjee Damdul is a distinguished Buddhist scholar whose interest lies in the relationship between Buddhism and science, especially in physics. Damdul received his Lharampa in 2002 from Drepung Loseling Monastery and he followed this with a year at the Gyume Tantric College. He has studied or taught at Cambridge University, Emory University and Delhi University.

Geshela has participated in several conferences on Buddhism and science, Life and Mind Institute meetings, and dialogues between His Holiness the XIV Dalai Lama and western scientists. He is now in Dharamsala where he is teaching at the Institute of Buddhist Dialectics and doing translation work for His Holiness the Dalai Lama. He also travels widely in both the East and West teaching Buddhist philosophy and practice.

See a photo of Geshe Dorjee Damdul teaching at the Abbey.