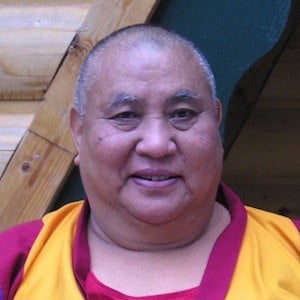 Khensur Rinpoche  Lobsang Tenzin, Geshe Wangdak, was born in 1935 in Kham, eastern Tibet. He ordained as a monk at age 10, and at age 18 traveled to enroll in the Loseling College at the great Drepung University near Lhasa. There he pursued the traditional monastic studies until 1959.

In 1960, after fleeing to India, he immediately resumed his studies, first at Buxa, where a temporary monastery was established, and then at the newly relocated Drepung Monastic University in Mundgod, South India, where he was awarded the highest rank, the Geshe Lharampa degree.

A brilliant scholar and outstanding practitioner, Khensur Rinpoche taught at the Institute of Higher Tibetan Studies (now Central Institute of Higher Tibetan Studies) in Sarnath, India until 1976, when he was asked by His Holiness the Dalai Lama to teach at his personal monastery, Namgyal Monastery. He became known as a master of both sutra and tantra, as well as a popular teacher to monks, lay Tibetans, nuns, and westerners.

Khensur Rinpoche was appointed Abbot of Namgyal Monastery in 1991, a position he held for the following three years, teaching advanced philosophy and tantra.

The Dalai Lama then appointed Rinpoche as abbot and senior teacher at Namgyal Monastery in Ithaca, New York. He now teaches at Chenrezig Tibetan Buddhist Center in Connecticut.

Rinpoche was the first lama to bless the land at Sravasti Abbey and has taught here several times.

View photos of Rinpoche blessing the Abbey land during his first visit.